@catwoman500I was interested in finding out what you thought of the last episode of the Durrells.  I think my question was buried in a post when you were not being notified?   Anyway, I watched the "Woman in White" 1st episode and I was right, I had very recently watched a movie on PBS with the same title.

Wow! Ooopsie! I missed reading this post, and now I can't even remember what the last Durrells was about! Was it the circus one?

Did you finish watching this new version of The Woman in White? N.

What great pictures of the fur babies. Just so sweet. Just raining here in New Jersey . I have to go to the Weekly share for Food Not Bombs later today.

Wish I could be out on the real front porch with a cup of coffee, but unfortunately at this time of the year, the temps do not cooperate. We are haveng a rainy weekend. Plus the temps dropped and the wind picked up. The Grinch on the lawn across the street took a tumble last night.

It's 39 again and feeling like 33...not too bad, but with the rain that will continue into tonight and the wind, it is not pleasant at all out there.

Stay warm and dry, everyone! N.

Morning Roll Call!!! Who's still on the Front Porch? The dogs in our lives

Today we are sacrificing the sun for some warmer temps. It's 50 right now, but the rain has started. We are expected to have a rainy weekend.

Trying to get the rest of the inside decorations put in place and trying to organize Christmas gifts so I can begin wrapping soon. I'm in the holiday mood after stopping for my Skinny peppermint Mocha at Starbucks this morning.

Ok, there's the dryer buzzer...have to go down and bring up that load.

Well, I am just finishing up wrapping up the donations for the veterans day. I will be driving them to the veterans new apartments , and helping them get see for the Holidays. Today is warm put over cast in New Jersey.

Good morning to everyone on the Front Porch! We are starting off the day with fog and a temp of31*. Clearing skies and a high of 40*. Lower 40's this weekend. May everyone have a restful weekend. A cloudy day here. It' 37 but feels like 33. Not bad since we'll be zooming into the 40's later. Yesterday was a gorgeous day, but cold. Glad I went out to do the end of my Christmas shopping. I'm almost finished. YAY!

Unfortunately when I went to the basement yesterday to throw in a wash I heard this trickle of water. There's a bucket under some pipe coming out of the heater, and I was supposed to be watching it to see if there was too much water coming out. So I have been sporadically checking and dumping the littel bit of water that was in the bucket, but this was the first time I ever saw the water actually trickling out. Called my heater comaony and the guys came out and had to replace some valve. I think he had told me to keep an eye on it earlier because he didn't want to have to charge me for the expensive fix. ($486!) So he was very sorry when he presented the bill to me. And this was the heating/AC customer price. He said if I wasn't a contracted customer it would have been a couple hundred more. YIKES!

So just what I need at this time of the year on top of all the money spent on gifts.

Anyway, at least the heater was still sending out heat and it will be fine for the winter.

I need coffee. Have a good day whatever you are going to do! N. 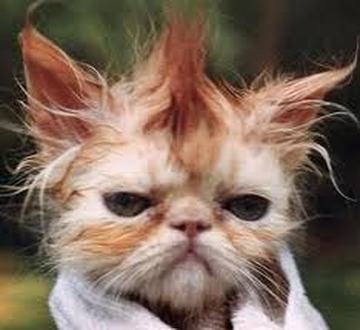 Rough night last night. A lot of sleep disturbance. So I'm slow getting up this morning.  But at least it's sunny outside and after the temps having hovered in the teens earlier in the week, I'm happy to report a heat wave at 33 degrees.  Smile.

Anyway, the garage roof is totally finished and looks good. Now, the rains can come and the insides will be dry.  However, snow is still not welcome!

Wishing everyone a good day and calm weather.  Be well.

Good morning to everyone on the Front Porch! We are starting out the day with clear skies and a high ot 35*. I came across an internet phoo which I think is a real "hoot". Hoping everyone has a great day and a restful night. Who isstill being dug out from the big snow storm? Report Inappropriate Content
Tags (1)
3
Kudos
938
Views
Reply
3 Kudos
Turn on suggestions
Auto-suggest helps you quickly narrow down your search results by suggesting possible matches as you type.
Showing results for
Search instead for
Did you mean:
Users
Announcements