Peanut or Almond butter and apple wedges; A kid favorite "ants on a log" celery with peanut or almond butter and raisins ( the ants ) ; Yogurt with berries and/or bananas; Hummus with pita bread or veggies;  What are your go to snacks?  Christine

I was making arguably not-too-unhealthy popsicles like crazy a couple summers ago: 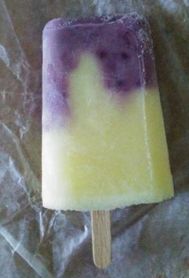 Living in Southern California, certain types of fresh fruit can be pretty inexpensive if you know where to shop.

I don't remember what specifically was in most of the popsicles in the photos, but they all tasted good. 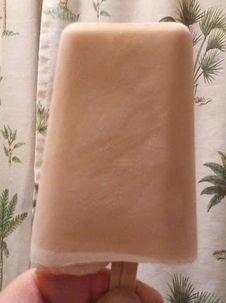 However, this one, above, might have been some sort of coffee (or peanut butter?) non-fruit concoction. Who can remember?

For the more traditional ones, I would wash the fruit, put in in a blender, basically turn it into a smoothie and pour into popsicle molds. 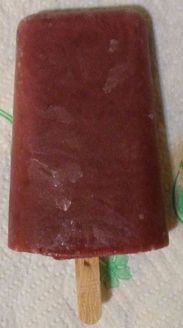 This one, above, was made with fresh cherries, mixed, blended, chopped to a pulp.

The dollar store sells the popsicle molds for — yes! — a dollar. Hard to beat that.

But most of them have a reusable plastic popsicle "stick" with a reservoir to keep the popsicle from dripping. Those went into the trash! What am I, a four year-old that doesn't know how to eat a popsicle? 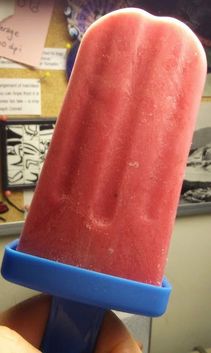 These popsicle sticks with the reservoir at the base made it very difficult and ironically messier to eat, so there had to be a another way.  (Above: a rare shot of one of my popsicles sullied by one of those stupid holders — shortly before I became enraged and pitched it into the garbage!) 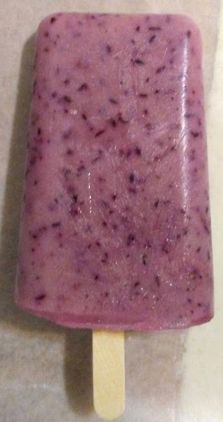 Above: "What are those flecks?" you ask. I have no idea. I'd say they were strawberry seeds, but the popsicle is purple!  It's purple, isn't it? It's not just me, right?  Why didn't I keep better popsicle-making notes?!  ...How many times have we all said that! 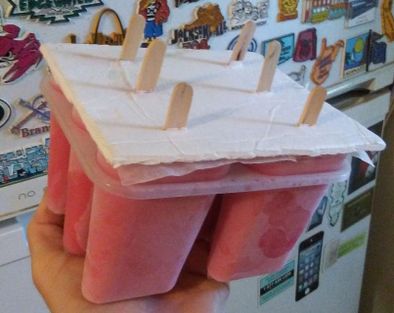 Simpler is often better: I ended up buying wooden craft sticks instead but had to figure a way to keep them centered in the molds during the all-important freezing part of the manufacturing process. I ended up using a piece of foam core with slits cut into it. Wax paper at the top of the mold kept it from sticking to the foam core. 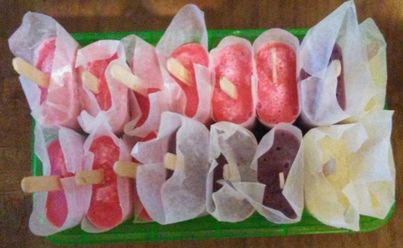 Once they were frozen, I'd pry them out (warm water on the mold made it easier), wrap them in pre-cut slips of wax paper, arrange them in a little box, and put back in the freezer, ready for easy access. 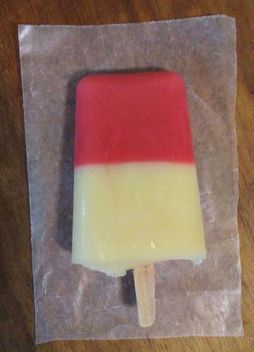 Above: Likely strawberry for the top and pineapple for the bottom. Fill half the molds, let freeze for an hour or so, pour the rest on top. Voila — two-tone popsicles!

My biggest concern was I was using these so-called "craft" popsicle sticks. I'd rather have used food-grade popsicle sticks, but as I recall, they were much more expensive and you had to buy them in bulk. And despite how much of a glutton I am, really, am I going to eat 500 popsicles in one summer? —Or, more importantly, do I want to give myself that option?

And how toxic could craft sticks really be? ...I'll be sure to update this post if I have any side effects in the years ahead!  Update! My tongue just fell off! Naw, I'm kiddin'. It's just gangrenous. 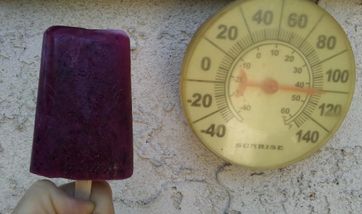 No idea what this one was made out of, either. Black grapes? Who knows? Regardless, it was either consumed or became a puddle on my patio within about thirty seconds of snapping this shot.

It's obviously not rocket science, making popsicles, though I seem to recall it was more trial-and-error rather than relying on online recipes. The one thing I did learn, though, is that using "Crystal Light" or sugar-free drink mixes? No no no! They don't freeze properly. Natural fruit juice and/or yogurt was the way to go to add to the fresh fruit.

@AvocadoDog  These look really good, except for the possible coffee/peanut butter non-fruit one, especially on this 90 degree (warm for us) June day.

I tracked back that photo in my album and see that I also snapped a pic of powdered peanut butter the day before, so mystery solved: It was peanut butter. Evidently not noteworthy enough that I remembered it.

@AvocadoDog Powdered peanut butter just sounds wrong, I need to be able to spread it on bread.

what is next, with more brainstorm.

Serve up some hot chowder,

Is this to be the new  norm?

Fresh fruit, unsalted cashews, unsweetened applesauce, muesli.  But sometimes you just got to have cookies and ice cream.

You inspired me to look up the difference between muesli and granola.

@ChristineU834853  First off, welcome to the on-line community!  So glad you have joined up.  Love all your suggestions. I can't tell you how many times hard boiled eggs have saved me from eating something not so good for me.  One of my favs is subbing avocado for the mayo in deviled eggs.  Someone mentioned subbing with hummus, but haven't tried that yet. I hard boil a dozen each week, and my hubby and I gobble them up.  Often we'll put them in salads for the protein.

Lemon cut in half, tho usually eat the whole thing at one sitting, nibbling the peel too. Fresh lemon juice in my water results in drinking much more water daily. Turmeric & fresh ground black pepper on 1/2 c low fat cottage cheese. Pepitos, a few almonds or walnut pieces for nutrients. I awarded myself a food dehydrator last year, so nibble occasionally on dried papaya, banana, kiwi, apple, a raisin or 2. Frozen grapes are refreshing!

@HollyH205679 Great ideas! Love frozen grapes!  Have been thinking about a food dehydrator for fruit too.  Have you enjoyed the process and finished product?  What brand did you purchase? Is the dry time long, and does the dehydrator take up a fair about of counter space?  Thanks for info.

I heard that freeze dried fruits are good but I haven't tried them because they are too expensive, about $4/oz.

Fresh fruit and 💦 what a Healthy Snack

Snacks I enjoy are

Dish of butter pecan ice cream or a Klondike bar (my favorite).

Yes I am at the Fitness Center trying to lose the pounds l have gained. 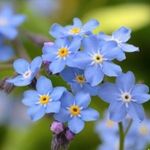 Some mixed nuts with raisins. Depending on the time of day I might add a few dark chocolate chips. Having the chocolate too late in the day tends to mess with my already defunct sleep. Eventually I'll figure out how to get a full night's sleep again, I hope 😅

@MonicaLBP  I think everyone's tolerance level on caffeine is different.  I try to avoid it much past Noon, super sensitive to caffeine. A little dark chocolate has anti-inflammatory properties, and I'm impressed you can keep it to just a few chips (that's enviable self-control )

Ah yes a good night's sleep, it alludes many. The good sleep hygiene is:  same time to go to bed and get up each day, keep the room dark and cool, comfy bed, eat dinner at least 2-3 hours before bed, end your blue screen devices and tv at least one hour before bed, check medications . . . and cut caffeine out many hours before bed time. Sorry I'm such a party pooper.  Hope you will soon be spending 7-8 hours consistently sleeping well.   ---  Christine

Peanuts, raisins and chocolate are the ingredients of a Chunky Chocolate Bar.

Hummus And tabouli for me!

@2Papa Love the Mediterranean diet!  Do you put mint in yours?  It reminds me of childhood, we had it growing in our backyard.  Always wondered about the two spellings.  tabouli and tabbouleh.  I like hummus and avocado for a start to a veggie sandwich. ---  Christine

I'm a pretty unhealthy snacker but every once in a while my love for a great deal intersects with something I like to eat and then next thing you know I'm bringing a bunch of these guys home: 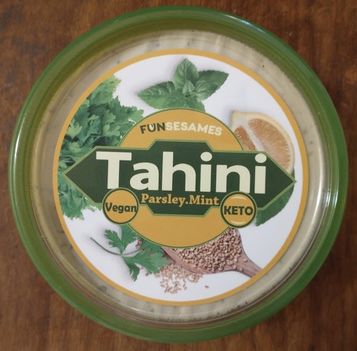 Somehow, I stopped myself at 28¢ worth.

Why so cheap? It was the 21st when I bought them and...well, here's the back:

I realize it's against the law, but it's the 29th and I'm still enjoying it. Mostly with length-wise sliced cucumbers.

Freeze the other three,

eat the first with glee.

One thing left to say,

to the Dog today.

0 Kudos
20,342 Views
0
Share
Report
Reply
Turn on suggestions
Auto-suggest helps you quickly narrow down your search results by suggesting possible matches as you type.
Showing results for
Show  only  | Search instead for
Did you mean:
Users
Need to Know