Hey AARP - you cheated me!

Hey AARP - you cheated me!

So I got this email from AARP to "spin the wheel" on my birthday to earn extra points.  So I did and the Wheel clearly says "1500 pts" but the "congratulations" says only 750 pts!  What a SCAM!  Here's a screenshot:

Well - I can't see the screenshot - - here's what I got when I tried to post:

This is really lowww AARP!

WOW!  I have never seen this.  My husband and I have been members since 2001.  Neither he nor I have ever received an email for this.  Consider yourself special, I certainly consider us as not special after seeing this.

What type of email is this?  What is the subject of AARP birthday email?  I've never received this in the 7 years as a paying member.

Can I spin the wheel even though my birthday has passed?

@mi4090 @shamit We began offering a birthday bonus via email in September 2021, I was able to opt you both in for that email today! You can go directly to www.aarp.org/rewards/earn/birthday21/ to access the prize wheel, this URL is valid one-time per user. If you redeemed your birthday points already, you will see the message "You already scored birthday points!" Enjoy!

Will you please add me to link with ability  to spin & receive points?

Thanks for all you do

@gm5271 Thanks for being a member! You should receive the Birthday email going forward. Your balance has been adjusted and you can confirm this by checking your transaction page: https://www.aarp.org/rewards/transaction/

Link didn't work &ck'd didn't see in transactions til realized may be in adjustments I saw it there Thanks! Appreciate your help and all you do for members

@gm5271 Whoops, my mistake! You are correct, it should show on the adjustments page, not transactions 😊 You are most welcome, you know where to find me if you need anything!

You weren't really incorrect...cause all is listed under Transactions History heading

I should've been more precise in my wording... instead of saying 'ck'd in transactions' Actually was ck'd under Transactions in Earned Points didn't see but found under Adjustments since you posted it vs my actually doing activity to earn points.

I've cleared cookies and cache on (4) browsers and getting nothing but a spin.  No Congratulations, No Updated Points in Transaction History or You Already Scored Points at all.

The link doesn't work correctly for me.

Thanks and have a great day.

I did the same as others.

the arrow stopped at 1500, but the display quickly changed to 750.  however no points were recorded,

so, I tried it again, just to see what it would do, and it allowed me to spin again.  exactly same result (1500, becomes 750, and no addition of points to my rewards total).

mmm.  there seems to be a problem with this promo.

thank you for looking into it.

@Mimi7Jud Thank you for that additional information. I was able to send you a private message here on the Community site. Please let me know if there's anything I can do!

I just tried for my birthday points by spinning the the wheel using the link you posted.  It stopped on 1,500 points.  Didn't say Congratulations at all, no update of points to Transaction history.

Please help with adding my points that I haven't received since becoming a paying member. 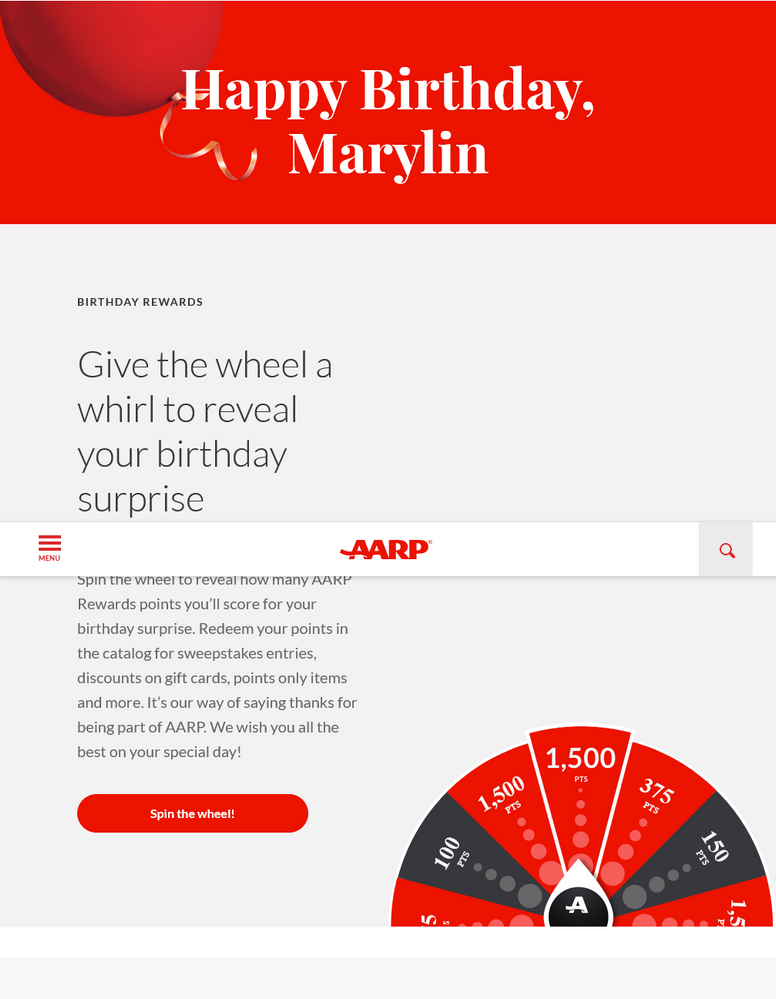 @mi4090 Thanks for reaching out! The birthday wheel was introduced just last year (Sept 2021). Upon reviewing your account, your bday is listed as being in January. This is likely why the birthday wheel was not working properly for you. This issue was resolved for you when you gave us a call yesterday. Keep an eye out for your birthday email with your personalized link on your birthday! Please don't hesitate to reach out if you need anything.

@hondochica Let me help! 1500 points is the maximum that you can win on the birthday spin. I reviewed your account and I see that the wheel landed on 750 points when you did the spin. This is why you received 750 points to your Rewards balance.

@AARPJanelleM- Sorry Janelle - I took a screenshot - the "congratulations" says 750; but the wheel clearly points to 1500! here's the image: 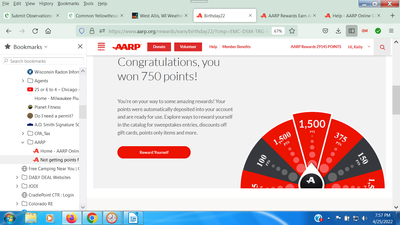 Looks like 1,500 to me. Maybe AARP assumes that us 'old people' are half-blind & stupid.

@hondochica, I am not sure if this is the case, but I thought I would answer.

Have you checked your "Transaction History" at the top of the rewards page to see if you were given all the points for that activity?

You are welcome @hondochica . It was worth a look.

@hondochica, I am not surprised at your issue.

This is the same AARP that partnered with THE ENTERTAINMENT BOOK for coupon rewards where I earned enough points to print a coupon for a free round of golf at one of our local golf courses only to find:

(1) The golf course was closed due to bankruptcy.

(2) The golf course closed, due to bankruptcy, PRIOR to the appearance of the coupon in AARP'S reward program.

(3) The golf course had been closed over a year prior to the appearance of the coupon in AARP'S REWARD PROGRAM. The course had weeds growing, chain link fences surrounding it, padlocks on the fences.

(4) Further research showed that the course was forced into bankruptcy because the owners of the course had been involved in spurious legal matter. The government forced the bankruptcy.

Since then, and this was several years ago, I haven't paid a bit of attention to AARP's REWARDS PROGRAM.

1 Kudo
3,286 Views
0
Share
Report
Reply
Turn on suggestions
Auto-suggest helps you quickly narrow down your search results by suggesting possible matches as you type.
Showing results for
Show  only  | Search instead for
Did you mean:
Users
Need to Know