("BABYSITTING A BAND ON THE ROCKS" - available at Newbury Comics locations throughout the Northeast and online at LTCDS.com > Webstore > Books).

"I added hutzpah to my resume while I was still a paying spectator.
Just as with my virginal concert with Tull (later for that), I had
endured another failed date for the first of Zeppelin’s two Physical
Grafitti performances at Nassau, on the day before Valentine’s no
less, with nosebleed seats just adding insult to the injury of my
ego. She just wasn’t that into me, I guess, but she sure was ecstatic
to see Zeppelin, even if they were tiny, faceless toy soldiers a few
football fields away. The next evening was when all of my friends
had their tickets, much better than mine, theirs just one level up
from the oor, on stage right. I hung around outside the arena
trying to buy a scalped ticket in the February freeze to no avail. But
I didn’t go home. Instead I lapped the Coliseum time and again
and again to hear what I could when someone opened an interior
door to hit the head or buy a hot dog. About 10 p.m. an older man
(much younger than I am now) appeared with his toddler to pick
up his teen, apparently thinking the show would soon be ending.
I convinced the dad that if he simply asked, the guards would let
him in. The dad was obviously not a fan, and even if he were he
wouldn’t be showing up this late and with child in tow to crash the
party.

“Oh, and while you’re at it, please tell them that I’m your son
so that they let me in, too.”

He was game and it worked, no questions asked. I found my
friends on the end of the row in Section 117 and sat on the stairs
right next to them, arriving just in time for the closer, “Stairway
to Heaven” plus a spectacular encore of “Whole Lotta Love,”
“Heartbreaker” and “Black Dog.” **bleep**, did I feel clever, like the
King of the World. (Three years later I would use the same
ruse to see Eric Clapton perform a few songs.)..." 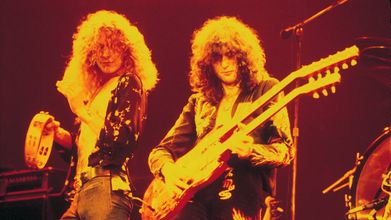 1 Kudo
656 Views
0
Share
Report
Reply
Turn on suggestions
Auto-suggest helps you quickly narrow down your search results by suggesting possible matches as you type.
Showing results for
Show  only  | Search instead for
Did you mean:
Users
Need to Know