The many varieties of Cardinals!

My oh my!  I had no idea that there were so many different kinds of cardinals in the world.  I love seeing the cardinals who grace my birdfeeders on a regular basis.  But these lovely creatures are equally different and beautiful!

10 Unusual and Unique Birds in The World 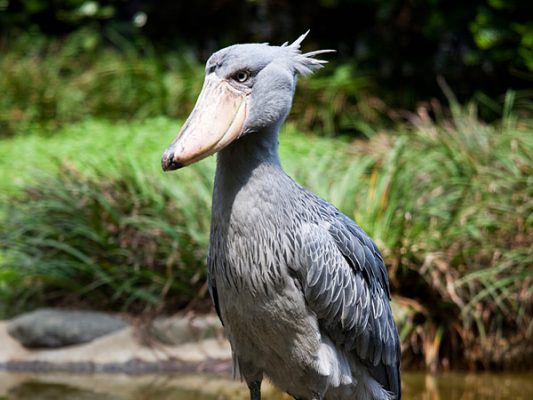 Shoebill is a unusual looking very large stork like bird, lives in large swamps from South Sudan to Zambia. The Shoebill bird identified by its unique features and also noted for its slow movements. 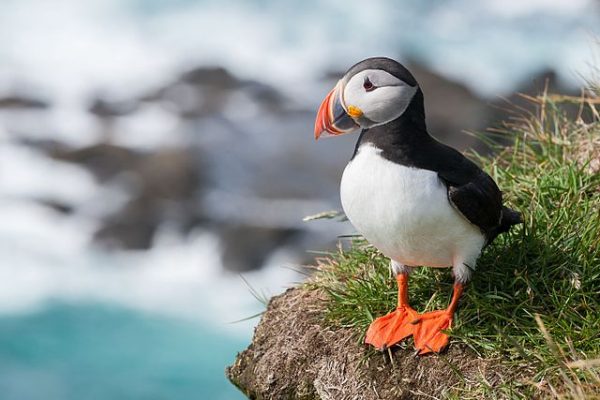 Puffins are small species of birds and one of the world’s favourite bird, live in most of the Atlantic region. The most popular Puffin Island in the world is in Westmann Isles and has the largest single puffin colony in the world. Hoatzin is a colourful bird found in swamps and mangroves forest of the Amazon and Orinoco river basin in South America. The hoatzin has to be one of the strangest, bizarre and unique bird found in the Amazon. Scarlet Ibis is a unique species of ibis in the bird family, found in the Llanos region,areas of South America and the Caribbean islands. The scarlet ibis has distinctive red plumage and has protected status throughout the world. 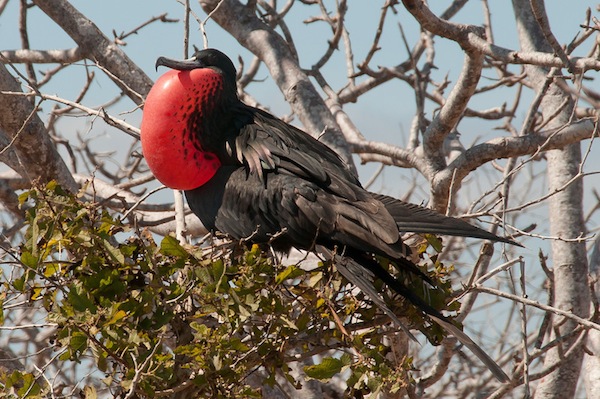 Frigatebirds are seabirds family bird,found across all tropical oceans in the world. The Frigatebirds has black plumage but male has a distinctive and striking red gular sac. 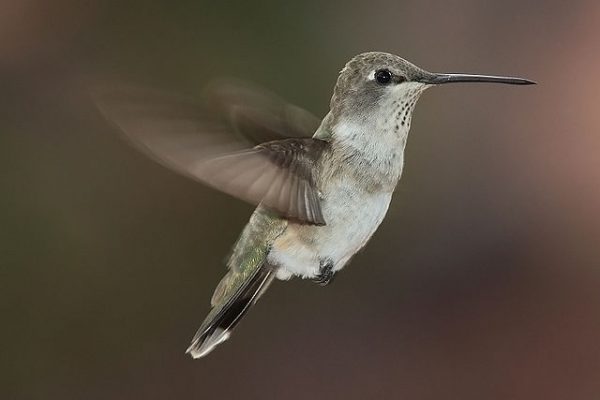 Hummingbirds are the smallest species of bird, mostly feed on insects,spiders and insect eggs. The birds are are known as hummingbirds because the sound of the humming by their beating wings. 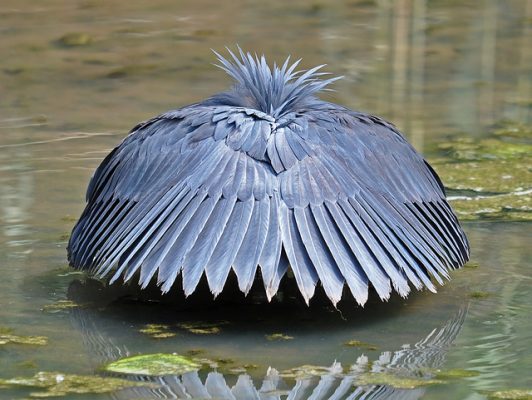 Black Egret also known as black heron is very famous for its unusual and unique hunting method, found in the shallow and freshwater in Sahara Desert. The black heron uses its wings like an umbrella to attract fish and this hunting method is called canopy feeding. 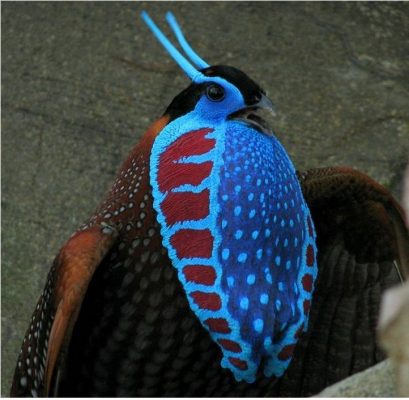 Tragopan is a pheasant species found along the Himalayas and one of the highly endangered and globally threatened bird. Male Temminck’s tragopan has very attractive crest, neck and breast with bright orange collar. 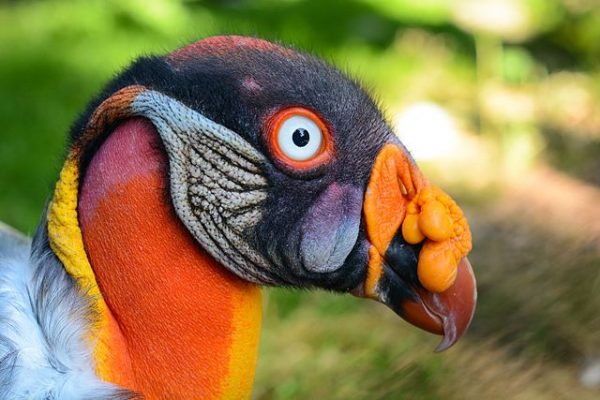 197 Views
Message 3 of 89
WE BIG, CLUMSY, SOMETIMES NOT SO SMART, HUMANS ARE LUCKY TO SHARE THE PLANET WITH THESE INCREDIBLE CREATURES!
EVEN A JOURNEY OF A THOUSAND MILES BEGINS WITH A SINGLE STEP.
Report Inappropriate Content
2
Kudos
197
Views
Reply
2 Kudos
Highlighted

The many varieties of Cardinals!

Woman captures stunning pictures of hummingbirds in her backyard (8+ photos)

Paula Stiles
Contributing Writer
HUMMINGBIRDSXOXO / INSTAGRAM
Singer/songwriter Tracy Johnson has been a musician for many years, but she also has a special hobby – she photographs hummingbirds.
She has been building up a solid fandom on Instagram with her photos of these jewel-like little creatures. She also has a YouTube channel. The videos of her handfeeding them are especially popular, sometimes getting hundreds of thousands of hits. 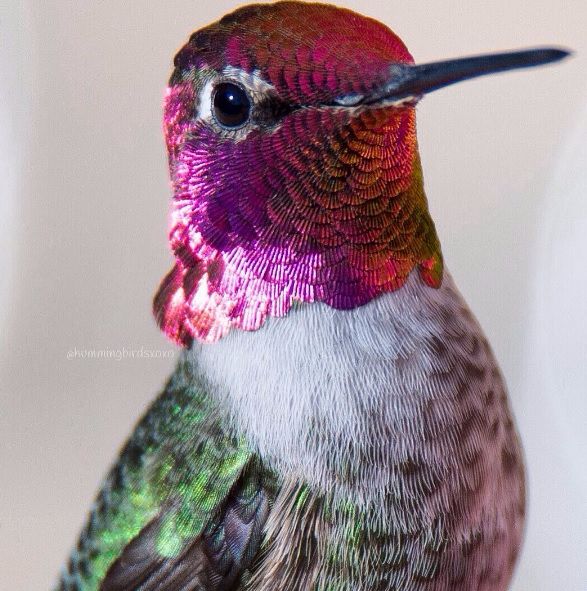 HUMMINGBIRDSXOXO
Johnson, who lives in Livermore, California, spends a good half an hour every morning on her hobby, putting out several feeders full of sugar water to attract the birds. 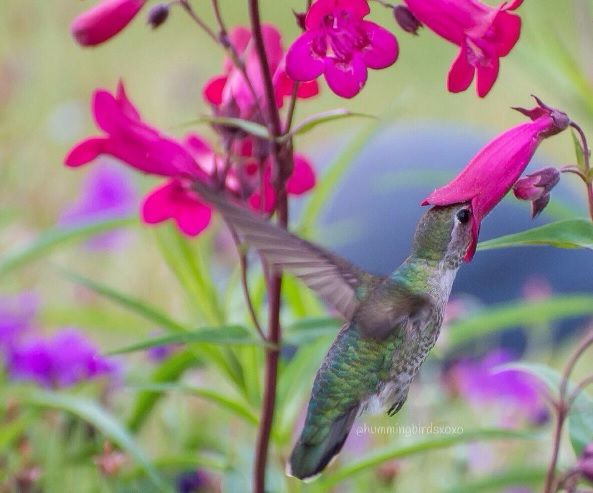 She has become so familiar with her tiny visitors that she has taken to naming them. 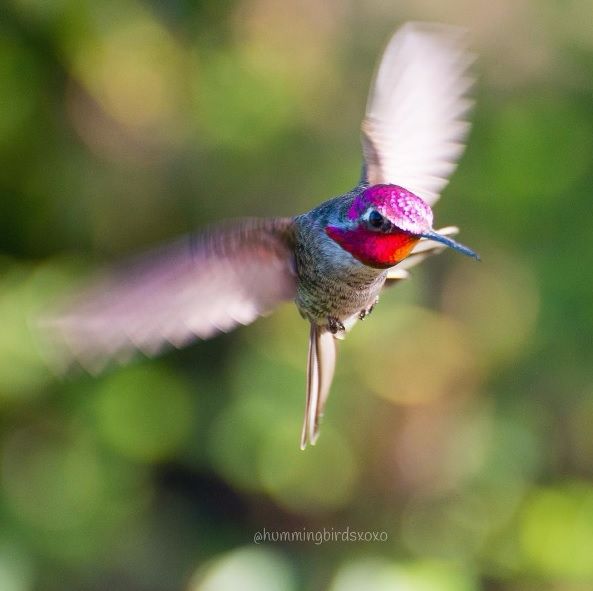 HUMMINGBIRDSXOXO
She also often comments affectionately on their daily activities, disputes, and personalities, as well as her artistic influences in how she photographs them. 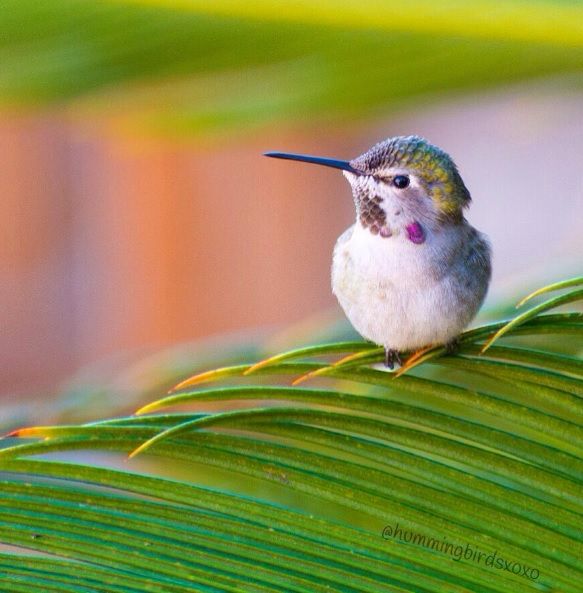 In addition to her own social media, she writes articles on related sites like Birds and Blooms, giving advice on how to handfeed and photograph hummingbirds. 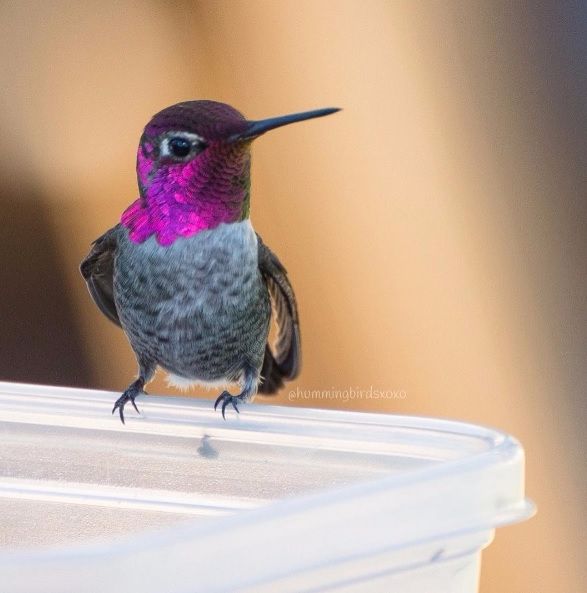 HUMMINGBIRDSXOXO
One of her most frequent techniques is to hold feeders out for the birds to feed, then take a photo when they come to it. This requires much patience and gaining of the birds' trust by standing still and regularly visiting the feeders, increasing their familiarity with her. 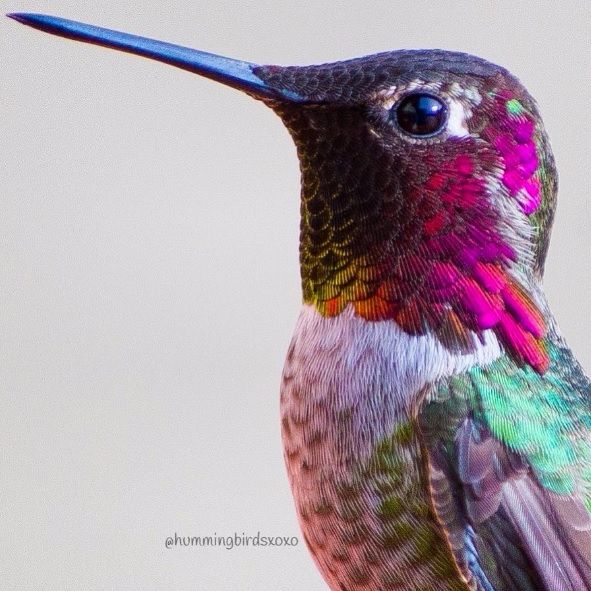 Johnson says that photographing such fast, small and shy birds can be very difficult. She may get only 15 clear shots out of 100. 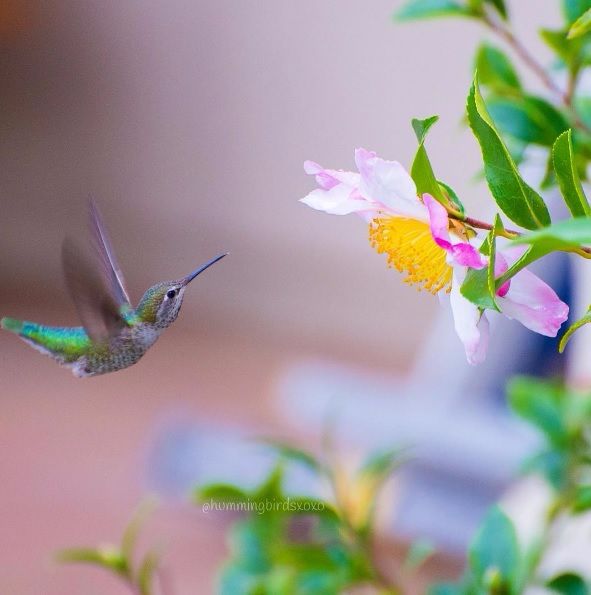 HUMMINGBIRDSXOXO
But it is worth it for the quality of the shots that she does get. 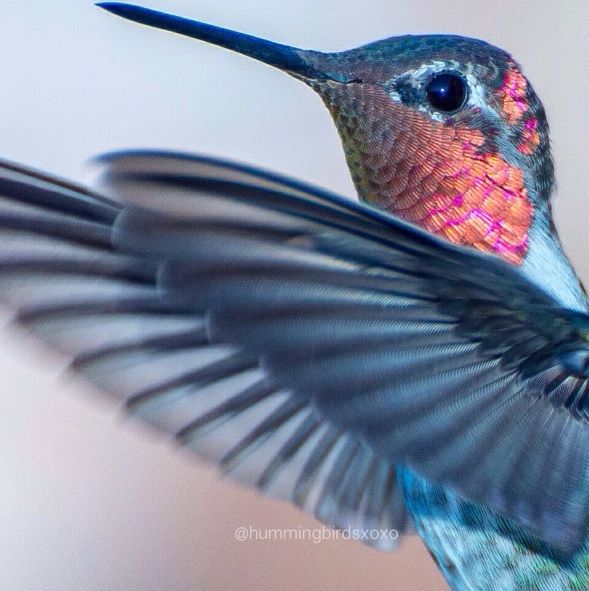 365 Views
Message 6 of 89
BEAUTIFUL- STUNNING CREATURES! Had never seen one in North Texas until 2009, first year in my new(old) house- saw one( don't know type) at trumpet vine on back fence. Although the vine is very invasive & pulling fence down, I cannot bear to have it removed. In the winter it dies back to a giant "bird habitat" tangle of a nest( 3x 4 ft.)& the birds( titmice, chickadees ?) hangout there. Of course the hummingbird loved those beautiful long orange flowers!
SUPERGIRL, NO REALLY I MEAN IT! HER REAL NAME & MINE ARE THE SAME( FIRST 2 NAMES ARE)
Report Inappropriate Content
1
Kudos
365
Views
Reply
1 Kudo
Highlighted Australian photographer Christian Spencer has lived within Brazil’s Itatiaia National Park for nineteen years. The lush natural surroundings offer a multitude of photo opportunities ranging from pumpkin toadlets to false coral snakes. One of Spencer’s most fascinating finds is the way that light diffracts through the wings of hummingbirds in flight, resulting in a rainbow of colors within the birds’ feathers. The photographer has been following the petite birds for years, and his film recording of the phenomenon was included in his award-winning 2011 short film, The Dance of Time.

More recently, Spencer has returned to these full spectrum moments. Each image in the artist’s hummingbird series captures sunlight filtering through the wings and tail of a black and white Jacobin hummingbird. Despite our age of post-production and photo manipulation, the images were not digitally manipulated; the visual phenomenon is naturally occurring.’WINGED PRISM’ (below) won a prize at the Museum of Modern Art in Resende RJ Brazil, and is available as a fine art print on Spencer’s website. You can follow along with Spencer’s animal encounters and nature-inspired paintings on Instagram. (via My Modern Met) Get to Know the Yellow-eyed Junco

Or, as locals in the Southwest once called it, the "lightning bird." This audio story is brought to you by BirdNote, a partner of the National Audubon Society. BirdNote episodes air daily on public radio stations nationwide.

The Dark-eyed Junco is one of the most abundant backyard birds in North America. Every September, hordes of them move south from the boreal forest, to winter across the US and southern Canada.

The familiar gray and white “snowbird” is not our only junco, though.

In the Southwest, a different species, the Yellow-eyed Junco, lives in cool mountain forests from Arizona and New Mexico, through Mexico into Guatemala. The southern bird shares the neat plumage and ground-hugging habits of its dark-eyed cousin.

But its eyes are an improbably bright golden-yellow, like tiny brass buttons, polished to a brilliant shine and pinned to the little bird’s face.

The great explorer and ornithologist, Francis Sumichrast was in Veracruz, Mexico in the 1860s. He reported that the locals called the junco echa-lumbre [AITCH-ah LOOMbray], the caster of fire, or lightning bird. The Veracrucians, he explained, thought the birds were phosphorescent, collecting light during the day and releasing it at night in the dim pine forests.

One look at the Yellow-eyed Junco’s weird spangled eyes, and you might almost believe it yourself.

Today’s show brought to you by the Bobolink Foundation.

The great horned owl (Bubo virginianus), also known as the tiger owl (originally derived from early naturalists' description as the "winged tiger" or "tiger of the air") or the hoot owl,[2] is a large owlnative to the Americas. It is an extremely adaptable bird with a vast range and is the most widely distributed true owl in the Americas.[3] Its primary diet is rabbits and hares, rats and mice, and voles, although it freely hunts any animal it can overtake, including rodents and other small mammals, larger mid-sized mammals, birds, reptiles, amphibians, and invertebrates. In ornithological study, the great horned owl is often compared to the Eurasian eagle-owl (Bubo bubo), a closely related species, which despite the latter's notably larger size, occupies the same ecological niche in Eurasia, and the red-tailed hawk (Buteo jamaicensis), with which it often shares similar habitat, prey, and nesting habits by day, thus is something of a diurnal ecological equivalent.[4] The great horned owl is one of the earliest nesting birds in North America, often laying eggs weeks or even months before other raptorial birds.

The eyes of great horned owls are among the largest of terrestrial vertebrates.

The great horned owl is the heaviest extant owl in Central and South America and is the second-heaviest owl in North America, after the closely related, but very different-looking snowy owl. It is heavily built, with a barrel-shaped body, a large head, and broad wings.[6]Its size can vary considerably across its range, with populations in interior Alaska and Ontariobeing largest and populations in California and Texas being smallest, though those from the Yucatán Peninsula and Baja California appear to be even smaller. Adult great horned owls range in length from 43 to 64 cm (17 to 25 in), with an average of 55 cm (22 in), and possess a wingspan of 91 to 153 cm (3 ft 0 in to 5 ft 0 in), with an average of 122 cm (48 in). Females are somewhat larger than males. Mean body weight is 1,608 g (3.545 lb) for females and 1,224 g (2.698 lb) for males. Depending on subspecies, maximum weight can reach 2,503 g (5.518 lb). This bird is called  Wilson's Bird of Paradise. 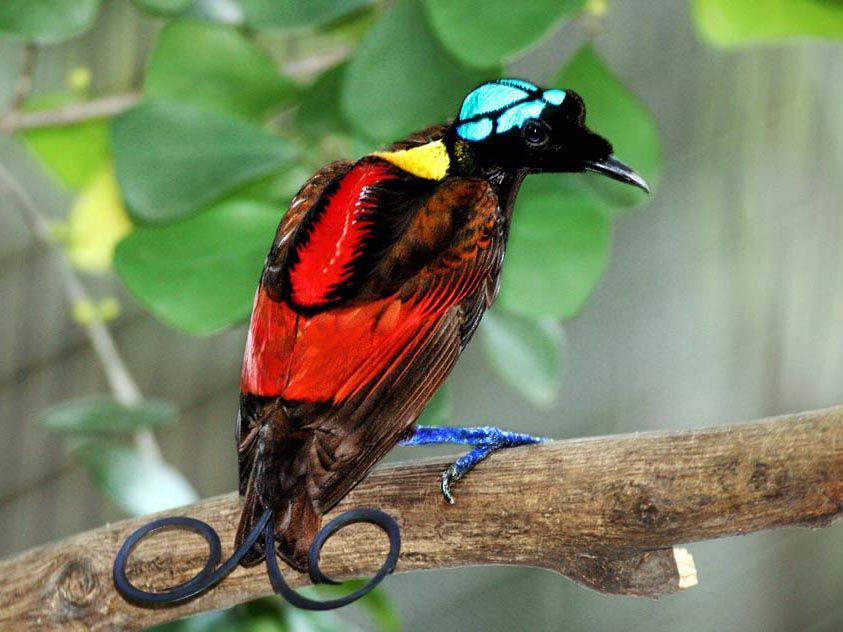 Wilson's bird-of-paradise is rather small. Males can reach a length of 16 centimetres (6.3 in) (21 cm including central rectrices) and a weight of 53–67 g., while females can reach a length of 16 cm,but a weight of 52–60 g. The male is a red and black bird-of-paradise, with a yellow mantle on its neck, light green mouth, rich blue feet and two curved violet tail feathers. The head is naked blue, with a black double cross pattern on it. The female is a brownish bird with bare blue crown.

In the field, the blue bare skin on the crown of the bird's head is so vivid that it is clearly visible by night; the deep scarlet back and velvet green breast are lush, the curlicue tail gleaming bright silver. 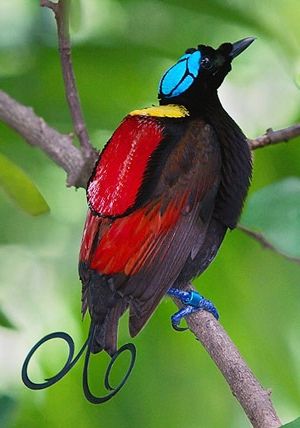 Its preferred habitat is the hill forest at 300 m of altitude, more rarely the lowland rainforest and the middle mountain forest.  An Indonesian endemic, the Wilson's bird-of-paradise is distributed to the hill and lowland rainforests of Waigeo and Batanta Islands off West Papua.

It is an endangered species.

Report Inappropriate Content
1
Kudos
566
Views
Reply
1 Kudo
Turn on suggestions
Auto-suggest helps you quickly narrow down your search results by suggesting possible matches as you type.
Showing results for
Search instead for
Did you mean:
Users
Top Authors
View all