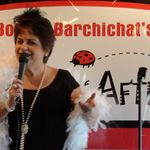 Senior Comedy Afternoons announces its return to the stage after an 18month hiatus due to Covid. The Upcoming Holiday show will be held at the Los Verdes Golf Course in the Vista Ballroom at 7000 West Los Verdes Drive, Rancho Palos Verdes, CA. 90275 December 12, 2021 starting at Noon for a 3-course lunch, the show starts at 1:15. Tickets are $85 each and need to be purchased by Dec 1, 2021.

The comedians are rarin’ to perform again indoors especially since Winter will be upon us and the Holiday Spirit will abound in décor, music and dance.

Comedian Karen Rontowski has performed in 45 out of 50 states and over 13 countries in addition to being on Letterman, Dry Bar Comedy, Comedy Central, Comics Unleashed, Sirius Satellite Radio and Live at Gotham. She’s even opened for Bob Hope and Ray Charles. Her comedy is optimistic and fast paced and is also now featured in a new line of greeting cards called “Frank and Funny”.  Fritz Coleman, the recently retired former weather caster of 40 years at Channel Four News has now gone back to his first love Stand-Up and has been a hit ever since. He’s also performed on Carson and Leno. He’s received 4 LA area Emmy Awards for his comedy specials and has performed his one person shows all over Southern California.

Headliner Marty Ross, who started his comedy career after being in the clothing business for 50 years has performed on “America’s Got Talent” and has been a fan favorite with over 11 million viewers worldwide. He performs at clubs, casinos, tv and on podcasts and is turning 82 soon.

In addition to our comedians there are other surprises in store on our stage. Birthday celebrations, a Mini Senior Expo and an air of Positivity and Fun!

LA County Mandates that all guests regardless of vaccine status wear face masks while indoors, but may be removed while eating or drinking at a table.

Bonnie
0 Kudos
549 Views
0
Share
Report
Reply
Turn on suggestions
Auto-suggest helps you quickly narrow down your search results by suggesting possible matches as you type.
Showing results for
Show  only  | Search instead for
Did you mean:
Users
Need to Know