Hello Folks, guess I should have posted here first.

Hello Folks, guess I should have posted here first.

I go by IndyMo, and as the name implies, live in a suburb of Indianpolis, known before Covid 19 as the auto racing capitol of the world! I only live about five mi. South of the dragway where the NHRA Nationals are held, and just yesterday whilst working on my lawn, heard some of those multi-thousand horsepower unlimiteds "exploding" off their starting lines. So there's always something going on, even if it is only shootings and murders downtown. My wife & i don't go down there too often. Oh yes, wife- been married for 62 yrs we are both the same age(early 80's) and are in reasonably good health. Like the old saying goes; "pretty good shape for the shape we're in!"  I'm a retired State code enforcement officer, and she was an executive Secretary.  We have three adult children and one grandchild. We cruised a lot of this old globe when we first retired and would like to do a little more if this confounded bug ever gets under control. So that's me, a peacetime Army vet  between Korea & Vietnam, held too many jobs, but seldom fired, and they were all good experiences. 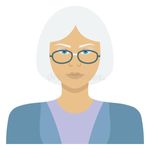 Looks like you have had an interesting life. Do you get a chance to talk about it to your grandkids? What would be your next trip you and your wife would like to take?  Nice to hear you still want to get out and do things. I hope things improve with the virus.  I know I'm getting tired of it.

Best wishes to you and your wife.

Hi Cookiedough, thanks for your answer. Yes, I have had an interesting life, but mostly, it's been nose-to-the-grindstone raising kids and paying off cars & houses, like everyone else. but the best thing I did was to quit "job floating" at age forty and going to work for the State in a job that held good pension, and that is how my wife & I managed to cruise pretty much around the old globe, and we did it in our late 60's and early 70's while we were still in good shape!  We took a non-cruise tour of Ireland four years ago. A bus trip that went 8 days all the way 'round the Isle, and it was amazing! Not only was the scenery beautiful, but the people were both gracious and a ton of fun.  So now, as soon as there's a vaccine, I'd like to return to the U.K and see the rest of Northern GB and Scotland From all the photos I've seen, those areas are every bit as beautiful as most of Europe (Swiss Alps excepted) But, being over 80, we don't even buy green bananas !  So, we'll just "play it by ear!"  thanks again for your interest-IndyMo

0 Kudos
1,073 Views
0
Share
Report
Reply
Turn on suggestions
Auto-suggest helps you quickly narrow down your search results by suggesting possible matches as you type.
Showing results for
Show  only  | Search instead for
Did you mean:
Users
Need to Know