Use the AARP Auto Buying Program to find your next car with the latest safety technology! Learn more.

Anyone out there dipping their toe into a more plant-based diet?  I've been embracing it more and more.  Just found a delicious product.  It's from Abbot's Butcher.  They have meat free versions of beef sausage, chicken and chorizo.  So far just tried chorizo, so good. They're soy free too!  Emailed the company and got two free coupons.  Looking forward to trying them out.

Do you have meat free products or recipes that you like?

About a year and a half ago I had one of  these "Beyond" Burgers at Carl's Jr: 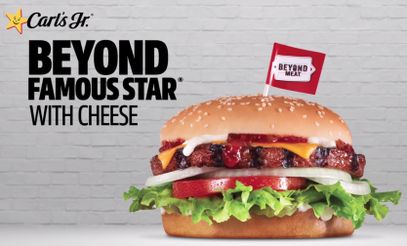 I didn't realize it was meatless / plant-based until after I was halfway through eating it. I had a coupon for it and ordered it without reading it closely.

It was fine. Not great, not bad. It was a standard Carl's Jr. burger. I think because it was loaded with ketchup, mayonnaise, tomato, onion, lettuce and cheese disguised any potential difference in taste.  (And any health benefits I might have gained from eating a plant-based burger were probably offset by the condiments!)

The real difference, I noticed, was in price. It would have been quite a bit more than the a normal burger without the coupon.

I'm not a vegetarian/vegan, but I'm not averse to eating plant-based foods. I think the manufacturers' hurdles have been making them taste like (and I guess have a very close consistency/texture to) meat, and the price.

I've occasionally bought plant-based stuff when it's been on sale and I've been a bit underwhelmed. But I think they've made some big advances over the last decade.

@AvocadoDog  Completely agree there are advances in the market.  Lots of money and research into plant-based products in last few years, and improvements and variety have skyrocketed.

That sounds quite good @Rhymesometimes! I've also been dabbling in meatless alternatives. One thing I discovered recently is called Adda Veggie. It's a pea protein mix that you add to your own veggies to create patties, "meat" balls, taco filling, etc. I've used it with mushrooms and broccoli. It's really tasty and I like being able to add my own veggies to it!

@AARPRachelA   A followed up with Abbot's Butcher.  Would not recommend the beef and chicken products.  But will definitely continue their chorizo product.  Going to order the Adda Veggie now, so I remember to do it.

@AARPRachelA Sounds like a great product.  I'm going to pick it up. Thx for the tip!

0 Kudos
1,873 Views
0
Share
Report
Reply
Turn on suggestions
Auto-suggest helps you quickly narrow down your search results by suggesting possible matches as you type.
Showing results for
Show  only  | Search instead for
Did you mean:
Users
Need to Know