Skills Builder for Work helps you gain in-demand skills that could give you an edge in today’s job market. Try it today.

Veterans Day is a day to celebrate and thank U.S. military veterans for their service to our country!  Post your Thank You here today!

If you need information, there are helpful articles for Veterans, Military and Their Families here.

I am so grateful for those who serve / served!  When I'm in public, I verbally thank every single veteran I see, and will always do so.  We are free because of them!

As a woman veteran, I ALWAYS thank those who thank me for being a veteran.  I remember, only too well those days when stating your status would get you booed or worse.  Being thanked, not only by other Veterans, but also by those who have never served makes me more thankful than ever that the tide of opinion has changed.  Truly, I do thank all those who have served, many in my own family, and all those who are serving, and those who will.  It is a commitment that we never forget, even though many years have passed since I got out of the military.

Just a quick note on here...If you see a lady wearing a Veteran hat...don't assume it is her husbands or sons or other family member.  We ladies can be veterans, indeed even retired military and very proud of it.

I am a retired AF veteran.  I have found that AARP's political agenda is against the veterans and those who serve and protect this country.  It is another AARP lie that they support veterans.

If you're gonna make a claim like that you should be more definitive.

From a Veteran...If you would like to THANK A VETERAN here is my recommendation.

Many of you have at one point in time seen an active duty military person in uniform, they will become a Veteran someday, perhaps at a public place such as a airport or restaurant. At a airport just merely shaking a hand and say "thank you for your service." Maybe offer to buy them a cup of coffee or a bite to eat.

If you are at a restaurant and are lucky enough to see a military family eating out. This is usually a treat for the families that typically occurs around the 1st or 15th of every month which is payday. DO NOT do this if you yourself are not financially able to or are seeking to be acknowledged. Just discreetly contact the server of their table requesting their check. Don't do anything to draw attention to yourself. If you are lucky you'll get to see look upon their faces when they are told "someone paid your bill."

Believe me it is an AWESOME FEELING and if possible to share this while your children or grandchildren are with you, it is a lesson they are likely to not forget.

Later on when you receive your bank statement or credit card bill arrives you will feel that same sense of pride in your act generosity.

As we all know "you can't take it with you" and the feelings of pride in your actions is immense, trust me I know from both giving as well as receiving. Having a complete stranger saying THANK YOU in either manner makes a person know what they do really does matter.

Thanks for your service

Thank you to all the men and women who valiantly serve our country to protect our freedom. Congratulations to the 715 Veterans Association, Inc., based in Queens Village, New York, as the Association celebrates its Golden Anniversary and 42nd Annual Memorial Service and Luncheon on November 11, 2018. Kudos to you for your lifetime work to support veterans.  Freedom is not free. Lest we forget.

Also, I pay tribute to the five veterans in my family (Army, Air Force and Navy). The legacy of my late great-aunt, who spent her entire career as a U.S. Army nurse, inspires me. Moreover, I pray for the safe return of the Active Duty Servicemembers. May the veterans receive recognition for their service and sacrifice.

I want to thank my late uncle Lee who served eleven years in the U.S. Army.  He never spoke about his time in the military, but I was and am so proud of his gift of service.  After his death, I received a ceremonial American flag and a certificate of honor in recognition of his service from the office of President Obama. I cherish both them.  But more than anything, I will always love and miss this brave, dedicated, and quiet man who was more like father than uncle to me.

I want thank my Brother who serves in the Airforce

I am a veteran of the US Army and a former Red Cross Service to The Armed Forces Volunteer. I am one of the lucky ones who is not a patient in The ROTTEN VA Hospital. Phoenix holds the record for the USA for the most number of veterans who died waiting for medical treatment. My thanks to all my buddies who served before, with, and after I did. A special thanks to Gary Senise and his Lieutenant Dan Band for all they do. He is this century's Bob Hope.

After giving several years to The American Red Cross, they threw me out as a volunteer. They told me that I sent inappropriate emails without telling me to whom and the content. They sent someone from Lansing Michigan to Detroit to inform me of a remediation program. The person who was to "remediate" me was unknown to me. No remediation sessions ever took place. I was criticized for breaking Red Cross rules by sending letters to parents and spouses of new enlistees (with my own stamps). The letters were sent to people who had not provided a working email address. The email and/or letter was to inform the parent, guardian, or spouse what to do in case of an emergency. The Red Cross is the only agency that can bring home a service member in the case of severe illness or death.

Some of the other Red Cross activities I participated in were: blood drives, visits to homeless veterans living in cardboard boxes or under bridges in downtown Detroit, playing Bingo with hospitalized vets at the Dingle VA Hospital in Detroit. I even helped take to non-ambulatory patients to a Detroit Tigers baseball game. I participated in a telephone drive with the local NBC affiliate to raise money for the victims of the floods in Texas and Florida.

I appealed the decision to dismiss me as a volunteer. The process involved a number of Red Cross people. After waiting SIX MONTHS, I received a rude and condescending phone call telling me the dismissal stood. Gail McGovern, CEO of The American Red Cross was aware of some of the above.

The Red Cross does some outstanding work, but internally they are abysmal!!!

I support all veterans that put their lives on the line for us so we would have freedom. Wishing you all a Merry Christmas and a brighter New Year.

My dad was a veteran of WW 2 and he always wore his Baseball cap with the Veteran on the front.

I will I'll never forget the look on his face the first time someone came up to him in the airport and shook his hand and thanked him for his service.  It happened many times after that and he was always so pleased.

Ghank a veteran anytime you can ! 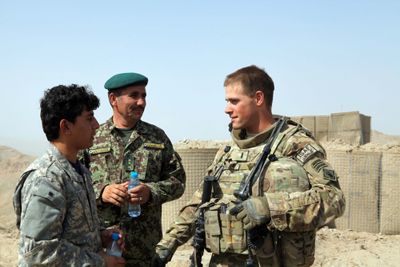 So grateful for all the veterans who put their lives on the line to keep us safe. Especially thankful and proud of my love, who served as an engineer officer in Afghanistan. #aarpsalutesvets

Thank you to all veterans and military service men and women for their sacrifice for our freedom!

Thank you to all Verterans who have served our country. We are so blessed to be in a country with men and women who choose to fight for all of us. These individuals fight for our common good, and common goal.

Grateful to have a Grandpa who served and returned home safety.

May God continue to bless America, and bless these Veterans.

I recently went shopping in our Walmart store and was in the deli getting some sandwich meats and cheeses (cheaper and more importantly healthier for me) when this entire family came over and took time for each of her four children to introduce themselves to me and thank me for my service. Their mom works at the Dallas VA Hospital and recognized me. I told them that the True Hero's are the men and women we lost in battle and back home to accidents or something like drugs or crime. I did my best to do my duty and for that I'm able to hold my head high and say. "Yes, I served my country and despite 3 strokes would do it all again in a heartbeat! Thank You for allowing me to be a part of the USAF!

From one Veteran to another.

THANK YOU for your service.

And from an Army Retiree .... Thank-You for your service!

THANK YOU for your service as well.

Thank you soooooo much for your service. It matters and so do you.❤Deb

Athanks a million 4 your skill and service from a veteran God Blessing  4 your members as well,.

Grateful every day for the men and women who make it possible for me to be free.

My brother-in-law is an airforce veteran. Our family is so proud of him and the sacrifices he made for our country. Many thanks to him, as well as everyone serving and who has served. God bless.

Thank you to all the veterans who have courageously and generously put their lives on the line so that we can feel safe. We appreciate all that you do and the sacrifices you make!

A special thanks to all the veterans out there. We are so fortunate to have you! USA!

My nephew Joe Harris is a proud veteran and my partner Drew and I are so lucky to have him as part of our family.

Thank you to all the veterans having served in the past and those currently serving. I know that their sacrifice and service is not in vain and promotes the many missions and purposes of our armed services: spreading liberty to the oppressed, guaranteeing human rights, defending the defenseless, stopping and preventing genocide, protecting the United States of America from threats both foreign and domestic. Of my dozens of family and friends who have served in the military, none regrets the experience, skills, and benefits that they have gained. Yes, heavy baggage from foreign deployments do come along as part of their service, but they know they were doing their part for something bigger than themselves. I pray that God may continue to watch over our troops, keep them alert and secure, and bring them safely home when their missions are completed.

My husband served in the US Army. I thank him and all those living and also those who sacrificed their lives. You have protected us all to live free because of your service. God bless to you all!!

1 Kudo
15,420 Views
0
Share
Report
Reply
Turn on suggestions
Auto-suggest helps you quickly narrow down your search results by suggesting possible matches as you type.
Showing results for
Show  only  | Search instead for
Did you mean:
Users
Announcements