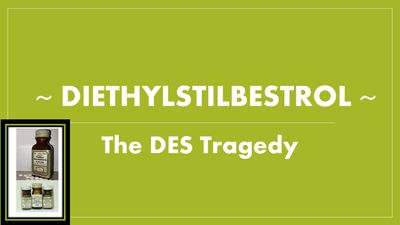 1. As early as 1939, researchers had shown that DES Diethylstilbestrol could cause cancer and changes in the reproductive tracts of mice and rats, but drug companies ignored these results.
DES did not lead to healthier babies, nor did it prevent miscarriages, according to research that began appearing in 1953
2. In 1953, a study of 2000 women at the University of Chicago showed that DES did not prevent miscarriage; on the contrary, it was associated with increases in premature labor and a higher rate of abortions.
3. Despite this study, the drug continued to be used. It wasn’t until 1971 that American drug companies were legally obliged to label DES “unsuitable for pregnant women”. The FDA did not ban the drug but issued a contraindication which means that the drug DES continued to be prescribed to pregnant women even after the link between a rare form of vaginal cancer in young women and prenatal exposure to DES was established.
4. A whole generation of new medical students and doctors don’t know about Diethylstilbestrol, yet a study published in 2011 confirmed lifetime risk of adverse health effect in DES daughters (the youngest are in their mid 30′s early 40′s). DES is one of those cases where the patients often know more about its effects than the doctors.
5. DES is a multi-generational tragedy. Research by the Netherlands Cancer Institute in 2002 suggests that hypospadias a misplaced opening of the **bleep** occurred 20 times more frequently among third-generation sons.
In laboratory studies of elderly third-generation DES-exposed mice born to DES daughter mice, an increased risk of uterine cancers, benign & malignant ovarian tumors and lymphomas were found. Third-generation male mice were shown to be at risk for certain reproductive tract tumors.
The DES Tragedy continues….
#TheDESTragedy
#Diethylstilbestrol
DESInfo411@gmail.com
KMFDallas
0 Kudos
2,105 Views
0
Share
Report
Reply
Turn on suggestions
Auto-suggest helps you quickly narrow down your search results by suggesting possible matches as you type.
Showing results for
Show  only  | Search instead for
Did you mean:
Users
Need to Know