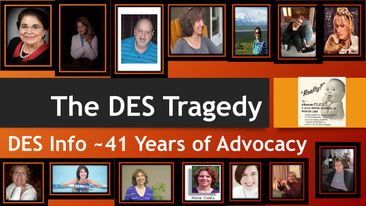 An, intelligent, active woman, herself a healthcare professional who had done research on prenatal development, questioned the advisability of her taking any pills early in her pregnancy.
Her OB/GYN became more forceful and said, “I am advising you to take DES: are you questioning my advice?”
The woman became frightened and guilty about her anger toward the doctor, backed down, and therefore became a complaint patient.
Later…. She regretted having taken DES. She was less angry at the doctor than at herself for having colluded with him……Sometimes the inclination to comply with the physician is interrupted by a trusted intimate….. Those were the time patients lived in the 1950s….Doctors were looked at as “God” in those days and you did what they said….Sadly another victim!
DES Info: Unfortunately, this DES Mother was intimated and then felt guilty. This was not uncommon and very sad! The DES Exposed are still awaiting an apology!
#Diethylstilbestrol
#TheDESTragedy
DESInfo411@gmail.com
KMFDallas
0 Kudos
1,605 Views
0
Share
Report
Reply
Turn on suggestions
Auto-suggest helps you quickly narrow down your search results by suggesting possible matches as you type.
Showing results for
Show  only  | Search instead for
Did you mean:
Users
Need to Know