In 1971, the FDA required product labeling to state that DES was contraindicated for use in the prevention of miscarriages. It is estimated that over 10 million Americans (mothers, daughters, and sons) were exposed to DES during pregnancy. Although DES is a synthetic estrogen and differs in structure and metabolism from natural occurring estrogens, many investigators believe that there is no evidence that natural and synthetic estrogen differ in biologic effect (including toxic effects).

Studies have shown a clear association between the occurrences of a rare form of malignant vaginal cancer, clear cell adenocarcinoma, with intrauterine exposure to DES. In addition, many DES daughters were found to have a benign condition called adenosis. This condition is characterized by the presence of non-malignant glandular tissue in the vagina.

A follow-up study at the University of Chicago revealed more breast and gynecological cancers about the exposed mothers than among a control group, although the difference was not statistically significant. A follow-up of DES mothers at the Mayo Clinic did not reveal any increases, but the dose of DES was on the average lower in the Mayo Clinic group. Today, we now know that DES mothers are at a higher risk of breast cancer and many have been lost to the disease.

Additionally, studies have shown an excess of abnormalities in the genital and possibly lower urinary tract in DES exposed males. Today, we now know of the gender identity issues many of the DES sons are dealing with. We question, will they also have a higher risk of breast and/or prostate cancer?

A DES Task force was formed in 1978 by the Office of the Assistant Secretary for Health to examine the health effects of DES in pregnancy. The group examined the current state of medical knowledge concerning the drug’s effects and made recommendations for immediate action as well as future research. The Advisory outlines the Task Force’s recommendations to assist physicians in managing patients who may have had pregnancy exposure to DES.

In 2013, most physicians still do not know the effects of DES exposure and how to care for and screen their patients.

This advisory letter was mailed to all licensed physicians in the United States in October of 1978. This warning was received seven years after the FDA ruled that DES was ‘contraindicated for use in the prevention of miscarriages. Since 1978, the consequences have mounted. Insidiously and ironically, infertility has been added to the effects of the DES male and female offspring. The drug given to enhance reproduction DID NOT DO SO! That same drug is now affecting three generations!

So many have died due to the carcinogenic properties of this drug. So many have lost pregnancies due to this drug. So many are dealing with the psychological effects of the drug and the conditions they must deal with. The DES exposed must continue to educate their health care providers and the screening and care they need. The Secretary of Health and Human Services, must today, again address this issue and mandate physician education.

The DES Exposed are still awaiting an apology for this “Medical Disaster”! 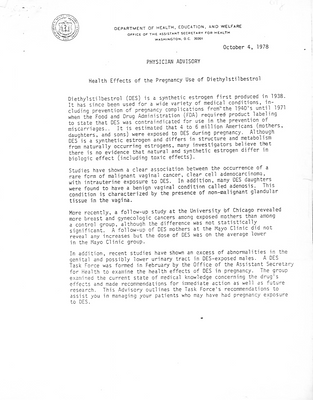 KMFDallas
0 Kudos
1,955 Views
0
Share
Report
Reply
Turn on suggestions
Auto-suggest helps you quickly narrow down your search results by suggesting possible matches as you type.
Showing results for
Show  only  | Search instead for
Did you mean:
Users
Need to Know