Richard, I take it from your reaction that you now acknowledge that your claim about me referring to fluoride-free natural waters was wrong.

I also think Connett's claims were bizarre - as you say "Of course fluoride anions are identical in any salt compound or as the free ions in solution." But he worked very hard to justify his statement that there was a difference.

However, you also seem to be arguing desperately for differences - without providing a single fact.

3: There is generally no reason for the concentration of calcium to drop when water is treated for drinking. Because lime is often used for water treatment the calcium concentration may well be higher after treatment.

4: You do not attempt to back up your implied assertion that somehow the calcium concentration of fluoridated water is lower than in the natural source water. I don't believe you can.

5: I have been into this discussion before and shown that the concentrations of calcium in our "soft" drinking water are much higher than anything CaF2 could contribute see - Calcium fluoride and the “soft” water anti-fluoridation myth. See figure: 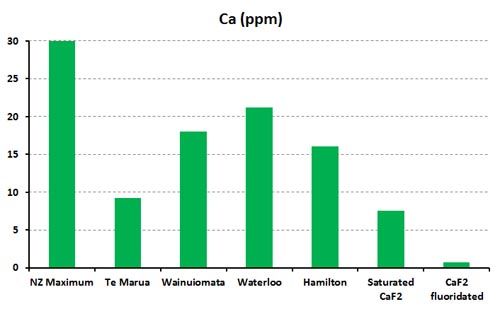 As I said then your claim was hogwash. It still is.

This is bizarre. Of course fluoride anions are identical in any salt compund or as the free ions in solution. So what? When fluoride is in calcium rich water as in natural sources it is not possible to drink enough to be acutely fluoride poisoned. The LD50 for calcium fluroide does not exist. But when fluoride is in calcium poor water at high amounts from sodium fluoride then people have been killed from lethal fluoride poisoning as in fluoridation overfeeds (JEPH 439490, 2013). If calicumfluoride had been used to fluoridated then no one would have been acutely poisoned. This is because fluoride toxicity depnds on the chemical environment in which the otherwise identical anions are located.  The LD50 for sodium fluoride is about 65 mg/kg (Merck Index) and sodium fluoride (but not calcium fluoride) is listed in all poirosns registries as a toxic substance.

But I was not discussing that. That has been published for all to read.

I was pointing out the Perrot statement that there is no such thing as naturally fluoride free water in the Connett section.I have no problem with Connett's words there, but with Perrot's..

Clean fresh drinking water deos not contain detectable contaminant fluoride. I suppose it doesn'tmatter how many times I say the pdf statement is worng.But the readers can read the pdf report themselves.

Bill - I think your problem is the use of meaningless words like "fluoridationist." What exactly does that describe?

Heath authorities are not as idiotic as you seem to wish them to be. When considering the introduction of health policies like community water fluoridation, etc., they rightfully consider a range of factors especially total fluoride intake - including dietary intake.

I cannot see what you comment has to do with Richard's mistaken attempt to attribute a claim to me.

Total fluoride exposure is so very important.  Fluoride from all sources.

Fluoridationists evade the issue and want to talk about fluoridated water as though it is the only source.

You are spot on Richard to bring up the issue of fluoride from all sources.

And Ken, you really mush look at total exposure.  Even though you support adding more fluoride to everyone, you must answer the critical questions of

3. How much more should we get and is that still safe?

This is what I wrote on page 9:

"Connett’s point 1: Why should we not be concerned about controlling the dose of natural levels of fluoride (or many of the other elements we consume) while only be concerned about the fluoride added as a “top up?” The are no differences between the “artificial” and “natural” fluoride anions in drinking water. In reality most elements like this have a sufficiently wide range of concentrations and intakes for efficacy that it is just ridiculous to treat them like powerful drugs which need accurate dosage."

What do you actually object to? I ask because there is nothing here relevant to your original claim.

In fact, Connett objected many times and at length to my statement "The are no differences between the “artificial” and “natural” fluoride anions in drinking water." - which is surprising for a chemist. he could not point to anything to support his objection.

It is under Ken Perrot Oct 30 the medical argument written criticism of paul connetts point 1.

I stand by what I said.

It is under Ken Perrot Oct 30 the medical argument written criticism of paul connetts point 1.

I stand by what i said.

Richard, you tell me "You might want to read the pdf again."

But a quick check on the Connett & Perrott (2014) document suggests to me that perhaps you need to read it yourself.

Nowhere in that article can I find the claim by me that there is"no such thing as naturally fluoride-free water."

So you appear to be arguing with a straw man.

In fact, checking through the document it is Paul Connett who refers mostly to natural fluoride in water or naturally fluoride-free water - not me.

Have a search for the word "naturally" to check that out.

Of course, if you can produce a quote of mine I am open to discussion - but as it stands there is nothing here to discuss.

In an attempt to imply that fluoride ingestion is no big deal because fluoride is ubiquitous naturally, the claim was made in the pdf that there is no such thing as naturally fluoride free water. You might want to read the pdf again. The other claims against Connett are for the most part misinterpretations of Connett's words that are not his fault. But who wants to spend their life correcting others' junk?

Furthermore, we have fought the San Diego city council for decades, both in a group setting, San Diegans for Clean water, and as many of us individually, and in public gropus at water district headquarters.  So to say we need to do something about the overruling of the cities' two votes against fluoridation and the city ordinance against it, as though we haven't, is laughable.

You say "contrary to the claim in the pdf." Could you please quote the claim and identify the pdf?

Who said what (exactly) where.