This is misleading. The Malin et al study does not identify "markers in American teens that suggest compromised kidney & liver function." In fact, individuals with liver or kidney disease were excluded from the study.

"this study did not aim to determine whether fluoride exposure
is associated with clinical decrements in kidney function among
U.S. adolescents. Rather, this study aimed to examine subclinical
changes in kidney or liver parameters associated with fluoride exposure
among a generally healthy population. For example, the lowest GFR
estimated in this study was 84 mL/min/1.73m2, and therefore none
were below the<75 mL/min/1.73m2 value considered reflective of
abnormal kidney function. Future prospective studies including participants
with and without kidney disease are needed to assess clinical
changes in kidney or liver function."

The latest study out today identifies markers in American teens that suggest compromised kidney & liver function that could result in chronic disease later in life. These markers are due to fluoride intake growing up in optimally fluoridated American communities.

Other recent studies have noted the biological damage due to oxidative stress caused by fluoride which has potential for causing all sorts of havoc in the body, including in kidneys, livers, brains and bones.

Frankly, it doesn't matter if the fluoride caused the organ damage or if genetic predilitictions made these inviduals more vulnerable to fluoride poisoning, there are significant percentages of the population who are harmed by fluoridation policy - harm that begins in utero but manifests over a lifetime as chronic disease, disabilities, and even premature death.

American reports have documented cataracts as a side effect of fluoridated medications. The fluorosis belts in Africa and Asia have high incidences of blindness, half of which is due to cataracts. Eye diseases are influenced by many factors, but .....

Fluoride exposure and fluoridation are implicated as contributing factors in several degenerative eye diseases which primarily affect senior citizens per March 2019 peer-reviewed article published in the International Journal of Environmental Research in Public Health. Metabolic reactions, genetic vulnerability & disturbances, and immunonological responses at play in a perfect storm that is typical of poisonous reactions in biological systems.

The Contribution of Fluoride to the Pathogenesis of Eye Diseases: Molecular Mechanisms and Implicati...

See comment from the senior citizen care-giver of an elderly woman finding ways to stabilize eyesight that include avoidance of fluoride. 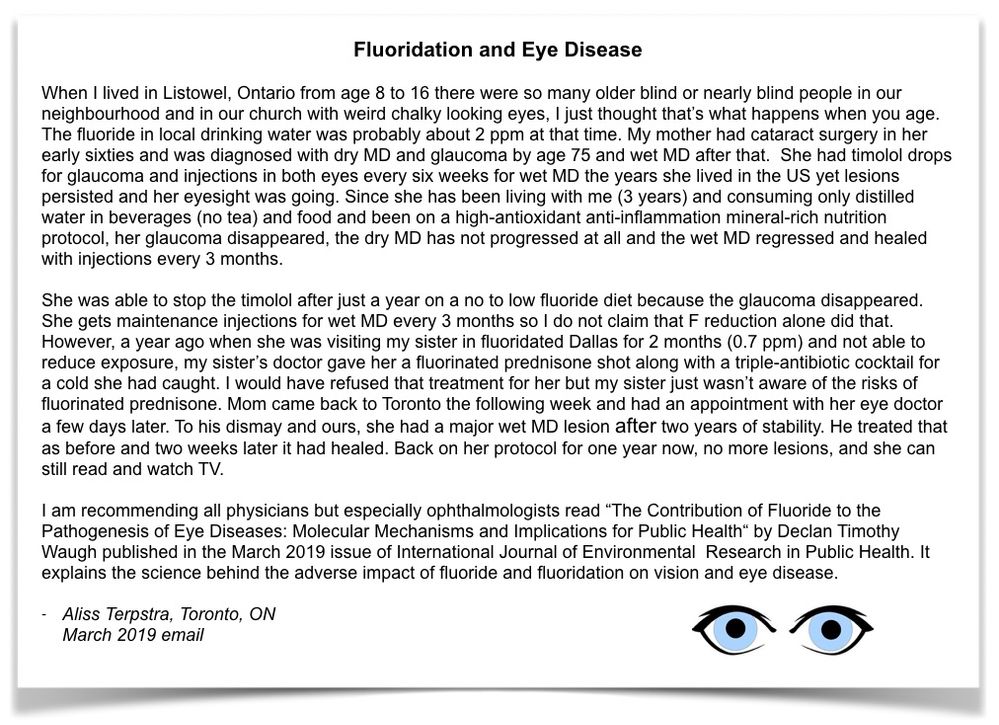 It is hard to believe that people exist in the United States in the 21st Century who actually hold on to the idea that fluoride is a nutrient. And yet right here in front of our eyes we see just that.

F is not a listed component of the blood because it has no human function or purpose and is a contaminant in man.

The EPA does not recognize fluoride as a nutrient but lists it as a contaminant of drinking water and had to set an MCL for it.

The FDA ruled in 1975 that fluoride is considered unsafe to add to foods. And fluoride compounds have never been FDA approved for ingestion in the U.S.  And ruled that fluoride is a toxic substance that in water needs to be regulated under the Toxic Substances Control Act.

Fluoridationists actually believe that fluoride is a nutrient like vitamin C is. Wow. All nutrients exert necessary physiologic actions and exert effects at levels that reach saturation and are fully reversible upon dilution of the nutrient. Fluoride has none of these properties and in fact exerts adverse effects on bone that are not saturable and not biochemically fully reversible

The FDA knows full well that vitamin C is a nutrient and that fluoride is not. No disease entity exists that is caused by fluoride deficiency. Caries are not caused by fluoride deficiency but are caused by bacterial metabolism of sugars to produce acids that attack enamel. Normal enamel can only develop in the absence of blood fluoride and normal enamel does not contain fluoride. It is a clear crystalline hard matrix of calcium phosphate forms called enamel hydroxyapatite, far too hard to incorporate fluoride. Bone  hydroxyapatite does accumulate fluoride to massive amounts during chronic consumption of low concentrations of fluoride mainly in drinking water.

The CDC now recognizes that toothpaste fluoride causes dental fluorosis enamel hypoplasia but has yet to understand that most of the fluoride in the bloodstream in a fluoridated city comes from the treated drinking water, not toothpaste. Some day they might get it but as of now endorse fluoride ingestion as though it were a nutrient although they do not label it as such.

Bill, come off it.

This issue has already been dealt with in my comments comparing F with other nutrients, I, Se, etc. "Dosage" is a completely inappropriate term for these nutrients.

Dosage.  How much is needed and how much is too much?

All the agencies that are supposed to “protect us” are truly there to protect the industry from lawsuits from us, the People! We, the People, have been conned. We are just consumers and filters of their poisons, but we pay dearly for our own demise!

Time to wake up and smell the coffee!

If the US actually had ‘health’ care, instead of Rockefeller Big Pharma (for profit) sick care, maybe the life expectancy would a bit better. See: https://www.washingtonpost.com/amphtml/national/health-science/us-life-expectancy-declines-again-a-d...

Isn’t it curious that the sugar industry has dictated US health policy for decades. See https://www.ajpmonline.org/article/S0749-3797(16)30331-2/fulltext?mobileUi=0

Industry-sponsored nutrition research, like that of research sponsored by the tobacco, chemical, and pharmaceutical industries, almost invariably produces results that confirm the benefits or lack of harm of the sponsor’s products, even when independently sponsored research comes to opposite conclusions.

But it is simple to criticize and denigrate any study on humans because you cannot put humans in cages to control all other variables. That by the way is why there are so many publications claiming ingested fluoride has some sort of benefit in affecting dental caries when in  fact it does not. You cant ensure all gropus eat the same amount of sugar, etc.  So most are worthless.

As far as the fact that low level fluoride (less than 1 ppm in blood) is correctly classified as a neurotoxin is mostly based on well controlled experiments with mammals (Varner, Reddy, Mullenix, etc). There is no doubt.

And it is also an acute poison at high concentrations where it causes heart failure at around 1-2 ppm in the blood chronically and it causes immedfiate complete heart block at about 3-5 ppm.

Industrial fluorides are toxics and governed by the TSCA which prohibit adding toxic substances into our drinking water. This law stems from the Clean Water Act which is derived form the original Water Pollution Control Act first initiated by President John F. Kennedy.  The misison of the Act section 101a is to maintain the natural chemistry of our nation's waters.

I don't know why it is so hard for those with a fluoridation agenda bias to see the truth, but it just is.

“Fluoride has no known essential function in human growth and development and no signs of fluoride deficiency have been identified.” - European Food Safety Authority on DRV  (2013)

What is ideological is for the pro-fluoride cartel to publish comments like:

I'm a pragmatist who prefers data and ethics to bickering. To that end, consider: 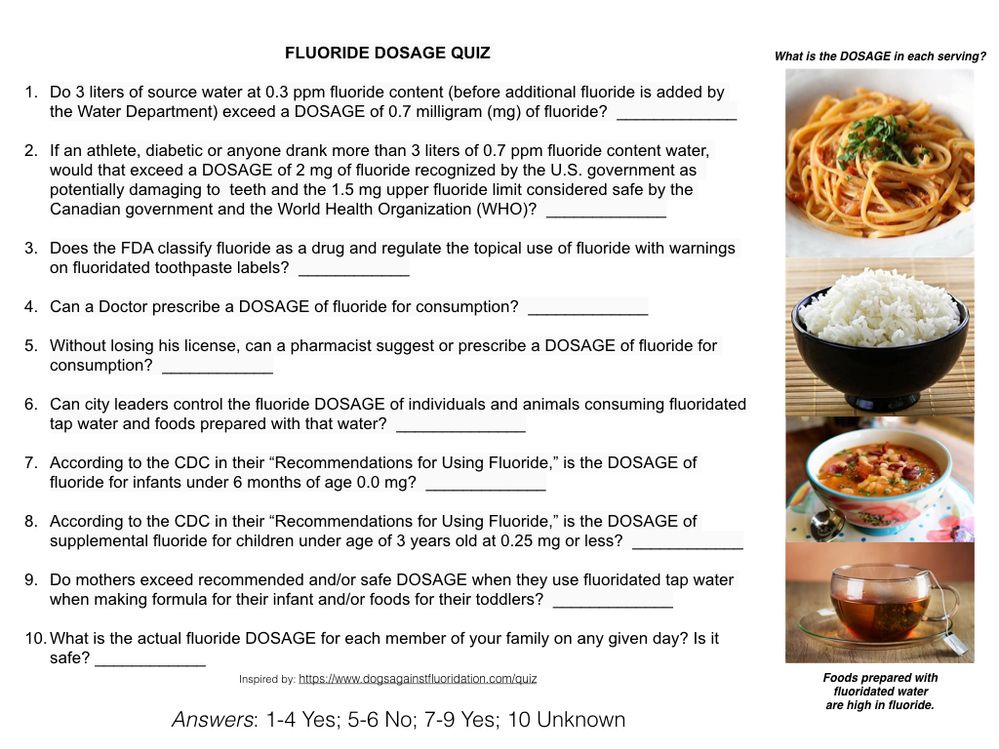 Report Inappropriate Content
4
Kudos
3003
Views
Reply
4 Kudos
Turn on suggestions
Auto-suggest helps you quickly narrow down your search results by suggesting possible matches as you type.
Showing results for
Show  only  | Search instead for
Did you mean:
Users
Announcements