I do not drink tea or use fluoridated dental products and haven't done so for decades. Neither do I drink wine or cosume any grape products since I don't tolerate them. I used a high quality filter that reduced the fluoride in my 'optimally' fluoridated water. I had suffered from decades of arthritis and gastrointesintal issues (among other things)....

Switching to bottled water in a desperate attempt to alleviate chronic pain, an attempt I thought was a waste of time, eliminated the debilitating arthritis in my foot in less than 2 weeks, as it did my IBS. My stiff neck and back quickly resolved, too. Now in my 60s, I no longer have arthritis and the only change was my water.

Denying my testimony and the testimony of about 30 seniors on this forum, as well as the scientific studies documenting our experience, is bullying behavior. The risk of adverse health effects from 'optimal' doses was documented back in the 1950s by Public Health Service researchers, but the PHS didn't want to admit a mistake. They preferred condemming millions to decades of misery, just like fluoridationists in the 21st century.

The danger from 0.7 ppm fluoride is zero.   Children improperly brushing and using toothpaste as candy and adults drinking large amounts of tea are those who are harmed by their mistaken and usually aberrant consumptions.

Even this case illustrates that these conditions are not related to the tiny amount of fluoride in drinking water.   This person with arthritis water was not fluoridated.

”It is difficult to get a man to understand something when his salary depends upon his not understanding it." - Upton Sinclair

Because of the gross over-fluoridation of our society which involves essentially all packaged foods and even fresh or dried foods, the evidence of fluoride poisoning in both fluoridated and non-fluoridated communities is undeniable. However, despite wishful thinking from fluroidationists who do their best to manufacture scientifically invalid reports, there is more 'overdose' with corresponding damage in fluoridated communities. The only rational move is to immediately end fluoridation in order to stem the tide of dental damage, disease & disability.

Forgive me for repeating myself, but since fluoridationists are willfully blind to evidence and try to bury it with their comments, allow me again to address your attention to these recently published studies.

OVERDOSED BABIES: Over one third of babies (37%) in fluoridated American communities consume amounts of fluoride in excess of the upper limits of fluoride considered safe per government regulations. Even 4% of babies in non-fluoridated communities are overdosed on fluoride due to consumption of products made with fluoridated water. At the very least, this puts these children at high risk for developing dental fluorosis, which is associated with increased incidence of learning disabilities, broken bones and kidney disease.
http://jocpd.org/doi/10.17796/1053-4625-43.1.7

THYROID: 18% of people drinking 'optimally' fluoridated water in Canadian communities have a heightened risk of low thyroid function because fluoride interferes with iodine metabolism. Many of them will be sub-clinical and not know they are mildly hypothyroid, which nevertheless increases their risk for diabetes, high cholesterol, and other problems. Study excluded those already diagnosed with thyroid disease.
https://www.sciencedirect.com/science/article/pii/S016041201830833X

PREGNANT WOMEN: Pregnant Canadian women drinking  'optimally' fluoridated water had twice the fluoride exposure per individual testing as compared to pregnant women in non-fluoridated Canadian communities - and consistent with the range in the Mexican women whose children had up to 6 points lowered IQ based on prenatal exposure to fluoride (from salt). Excluded those with health conditions such as kidney disease as well as considered confounding factors such as tea consumption.
https://ehp.niehs.nih.gov/doi/pdf/10.1289/EHP3546

Hey Chuck - Thanks for the fact-check.  It's rare that Chuck and I agree on anything.  But clearly he admits that people can get way over recommended doses of fluoride simply from brushing their teeth and drinking their tea.  Logically, that means there is no need for water fluoridation.

This patient did not have a fluoridated public water system.  (first paragraph next to last sentence) This case, if indeed the symptoms were from fluoride in tea and toothpaste is consistent with recent data which shows that enamel fluorosis rates are the same in fluoridated and not fluoridated towns

and from New Zealand

The data is that community water fluoridation prevents cavities in both baby and adult teeth.  Further, the effects of too much fluoride come from the inappropriate use of fluoride containing products, toothpaste, mistakenly prescribed supplements and tea (especially green tea) being at usual sources. 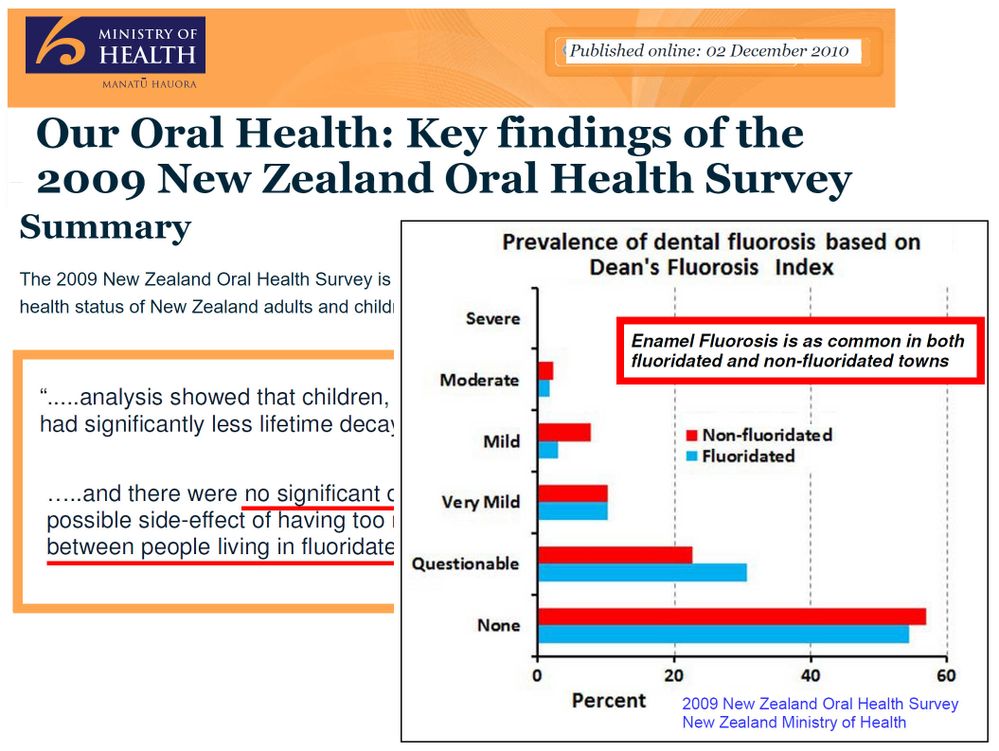 “One usually expects at least a factor of 10 between a no-effect level and a maximum ‘safe for everyone’ level, yet here EPA seems to approve of less than a factor of 6 between ‘not safe’ and ‘recommended for everyone’ (including susceptible subpopulations).” -  Dr. Kathleen Thiessen, 2006 National Research Council panelist (2017)

This is an excellent animal experiment that finds there are observable differences in the brain tissue of rats who consumed relatively moderate amounts of fluoride 'long term' which for an experimental rat is 10 weeks. These changes were observed in the part of the brain having to do with memory and learning.

The risk assessment rules for determining a 'safe reference dose' for human populations using a no observable effect level (NOEL) in an animal experiment is reducing the concentration by a factor of 100 for occassional exposure and by 1,000 for chronic exposure. So, for 50 ppm in an animal experiment, we could predict that any fluoride in drinking water above 0.05 ppm is harmful to senior citizens - except that this wasn't a NOEL. They did observe an ill effect at 50 ppm, so that concentration should be further reduced, cut in half or more... so any fluoride in drinking water concentration above 0.02 ppm consumed long term is  potentially damaging to brains.

NINJA EDIT: I originally calculated an uncertainty factor of 100 to get 0.5 ppm, but that would be for occassional exposure. In drinking water, the reference dose would be 0.05 ppm for chronic exposure.

In Southern California where our water is very alkaline (pH 8.3), aluminum filters do not function well since aluminum binds hydroxide ion more efficiently than it does fluoride under these conditions.. I am also concerned about aluminum leaching from such units, so having a reverse osmosis unit installed for drinking and cooking water is good. 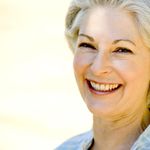 We must fight FLUORIDE, it's more than proven that it is toxic. We need to demand action.
Meantime, we must protect ourselves with installation of a REVERSE OSMOSIS system, and if you can afford it a Whole house system with an ALUMINA ( not just carbon) Filter. I was fortunate to get an Aqualistic system a few years ago. Even my showers are fluoride free.
You can also research other filter systems, like distillation systems.
You can also help your body detox it with good supplements. Chlorella and Fresh Cilantoro are good inexpensive options.

'If you can't explain something in an honest manner on one page, you don't understand it.' - Paraphrasing many scientists

In reaction to Randy's 2,075 word comment in which he redirects readers to both his personal blog and other wordy combative posts he's made on this AARP site, I have two things to say.

Report Inappropriate Content
4
Kudos
2992
Views
Reply
4 Kudos
Turn on suggestions
Auto-suggest helps you quickly narrow down your search results by suggesting possible matches as you type.
Showing results for
Show  only  | Search instead for
Did you mean:
Users
Announcements