So the DOCTORS AND DENTISTS who are listed there on YouTube....are no longer credible BECAUSE they are on YouTube??  Is THAT what you're saying??   Hahahahaha......  Ya, that makes ALL KINDS OF SENSE doesn't it??

Ya know what?? We should go after their licenses because somebody interviewed them on YouTube.....HOW DARE THEY ALLOW THEIR INTERVIEWS BE SHOWN THERE?? (sarcasm intended)

Maybe someday someone will interview YOU and post it on YouTube....then the rest of society will know you for what a "farce" you are....BECAUSE YOU WERE PUT ON YOUTUBE.......RIGHT???

(That IS what you're saying, you know).

Just terriffic, a bunch of YouTubes to justify opposition to what the CDC considers one of the great accomplishments in public health in the 20th Century.

Here's a systematic review from the Community Preventive Services Task force published in a peer reviewed journal .. more worthwhile than an infinity of YouTube videos.

It was stated here that fluorosis does not adversely affect the health of teeth. Really? Normal teeth enamel is a layer that protects underlying bony dentin from exposure to the oral environment. Fluorotic hypoplasia refers to the fact that the enamel covering is not as thick as normal in the discolored area. Long term teeth protection requires normal thick enamel, not a thinned layer that cannot possibly last as long as a thick layer throughout a person's life.

The Kumar data and others do not ever demonstrate that fewer caries exist in teeth regions that are fluorotic that is ever larger than experimental error. The less enamel covering there is, obviously the less protected the tooth is.

As far as Limeback arguing there may not be adverse bone symptoms due to lifelong consumption of fluoride water, there are no people in the U.S. who have ever been exposed to fluoridated water for the average human lifespan of 75 years yet (the practice only started in 1945). Further, as a participant in the NRC report he was complicit in the textual statement that bone fluoride levels in areas drinking 1 ppm F water are around 2,500 mg/kg while not stating the very data shown in the accompanying table that indicated bone pain in persons having bone fluoride levels below that (around 1,700 mg/kg). It's amazing how one can see what one want to see and not see what one doesn't want to see. The NRC study was not allowed to investigate water fluoridation at 1 ppm, so if you don't look at the raw data you may be trapped by the misjudgments of those who too cursorily summarize the data.

And there is no mechanism to assess bone strength in vivo in a person who has consumed fluoidated water for decades, so the effect that any fluoride accumulated amount has on bone is determined by analyzing the structure of fluoridated bone at various concentrations in vitro. There is zero doubt that fluorotic bone is abnormal bone becaue it is a perturbant that induces formation of bone of abnormal unit size and shape.

Blood comonents are all known and are published in the Merck Manual and most all Nursing Texts where each component has a known specific physiologic function. Fluoride has no physiologic function and is thus only a contaminant and of course is not listed as a required normal blood component in any reference source. It is not a nutrient and has no place in human blood, as stated previously.

I have no "dog in this fight" but over the years I've heard far more bad about flouridation in our water than good.  Many of the links below are from Doctors and Dentists....please check them out.  Are they all "misinformed?"    I doubt it....

Yes, as I said, the daily upper limits for infants and children ages 0-8 are considerably lower than the 10 mg per day limit above the age of 8.  The reason for this is due to chance of mild dental fluorosis during the teeth developing years of 0-8.  Mild dental fluorisis is a barely detectable effect which causes no adversity on cosmetics, form, function, or health of teeth.  As peer-reviewed science has demonstrated mildly fluorosed teeth to be more  decay resistant, this effect is considered by many to not even be undesirable, much less adverse.

Those parents who are concerned with mild dental fluorosis, in spite of the increased decay resistance of these teeth, may certainly avoid using fluoridated water for their children during these years if they so choose.  Otherwise, there is no need to do so.  There is  no valid evidence to support the claim that the “desired level should be zero”.  Nearly any substance in the bloodstream other than perhaps plasma and blood cell components, could be considered to be a “contaminant”.  This obviously does  not mean that the desired level for all substances is zero.

There are no “proven” adverse effects on the brain, bones, or any other bodily system, from optimally fluoridated water.  The National Academy of Medicine does not concern itself solely with  dental fluorosis.  If there was a concern for any other adverse effects of fluoride in infants and children,  the NAM upper limits for daily fluoride consumption would reflect this......and, this limit would not jump to 10 mg at age 8 if there were concerns other than dental fluorosis.

Optimally fluoridated water has no adverse effect on bone.  Even long time fluoridation opponent Hardy Limeback reported this finding in a 2010 study he co-authored.

“ While we cannot definitively rule out an effect of low-level fluoride accumulation over long periods of time, especially if specific individuals have a genetic or disease background that renders them unusually susceptible to fluoride, it nevertheless appears that the contributors to bone health are too many and varied, and any possible effect of municipal fluoride ingestion is too small, for municipal water fluoridation to be a significant determinant of bone health within the general public”

The Long-term Effects of Water Fluoridation on the Human Skeleton.

I  certainly have no problem with this thread being closed. For  the benefit of your readers who seek accurate information on this healthcare issue, I am simply providing evidenced information to correct misinformation posted on your site  by fluoridation opponents, who do so all over the internet.

The NAM upper intake level for fluoride in infants up to 1 year old is 0.7.- 0.9 mg per day. And in children up to 8 years old is 2.2 mg/day.  If these were actually followed, then fluoridated water would need to be avoided since 1 mg of fluoride is ingested simly from drinking and eating 1 liter of water if it were the only fluoride source. Soups, stews, etc. and water-based drinks including formula, etc. provide more fluoride daily than allowed. The desired level should be zero since it is not a mineral nutrient and in fact is a contaminant of the bloodstream. It is called an "allowance" rather than a requirement for a reason--it shouldn't be there at all----we are not designed to need it.

And these limits merely help avoid significant dental fluorosis in childhood and crippling skeletal fluorosis after lifetime drinking and eating. The limits do not prevent proven effects on developing brain or the formation of bone of poor quality that fluoride ingestion causes at any concentration. There is no blood fluoride level low enough to prevent incorporation into bone, which begins the process of formation of poor quality bone.  Read the Newbruynn text writen by a fluoridation promoter. Fluoridation of bone is progressive through life and from drinking water leads to levels in bone that cause bone pain and weakening.

1.  Sure, Bill, the internet is a wonderful thing.  Instead of depending on your memory, and/or blurbs from “fluoridealert” all you have to do is exert a modicum amount of effort, and you can obtain a wealth of accurate, authoritative information.  Here’s a link to the NAM reference tables:

The daily upper limit for fluoride intake is 10 mg/day for children and adults above the age of 8 years.  That for infants and children 0-8 is considerably less due to the chance of occurrence of mild dental fluorosis in teeth during those teeth developing years. That such fluorosis is the only reason for this lesser upper limit is evidenced by the fact that after age 8, the teeth have developed, dental fluorosis no longer possible, and the daily upper limit jumps to 10 mg.

2.  If you have valid, peer-reviewed scientific evidence that “all 200,000,000+++ people in the USA had dental fluorosis even severe” then feel to present it any time.  Otherwise your question is moot.

3. Your garbled opinions on the EPA...NAM...or whatever it is to which you are trying to refer, are irrelevant.

4.  If you have any valid, peer-reviewed scientific evidence of any adverse effects of fluoride intake from optimally fluoridated water in conjunction with that from all other normal daily sources of fluoride, feel free to present it any time.

Thank you for responding to my question.   You state, "So, I’m really not aware as to why you are obsessed with “correcting” a non-existent problem, and don’t know how to help you with that."

Apparently for you, there is no amount of dental fluorosis which is of concern.  I presume if all 200,000,000+++ people in the USA had dental fluorosis even severe, that would not be a problem for you?  Or is there an upper limit acceptable to you?

You reference the National Academy of Medicine 10 mg/day of fluoride as a threshold of adverse effects.  What adverse effects did they use to make that determination?  Are you referring to the book "Health Effects of Fluoride" from 1993?  Or which one?

I presume the 10 mg/day is for adults and what did they recommend for children and infants?

Note how they ignore infants, use the 90th percentile which ignores those drinking the most water, proposes to increase the RfD (EPA's "safe" dosage) and about a quarter of kids will still ingest too much even.  EPA has skewed the evidence as much in favor of fluoride as they can and still many are harmed.

The reason I'm focused on excess fluoride exposure as considered with dental fluorosis, is the effect that much fluoride has on other tissues.

We can't really consider risks until we know how much fluoride is excess in your opinion. 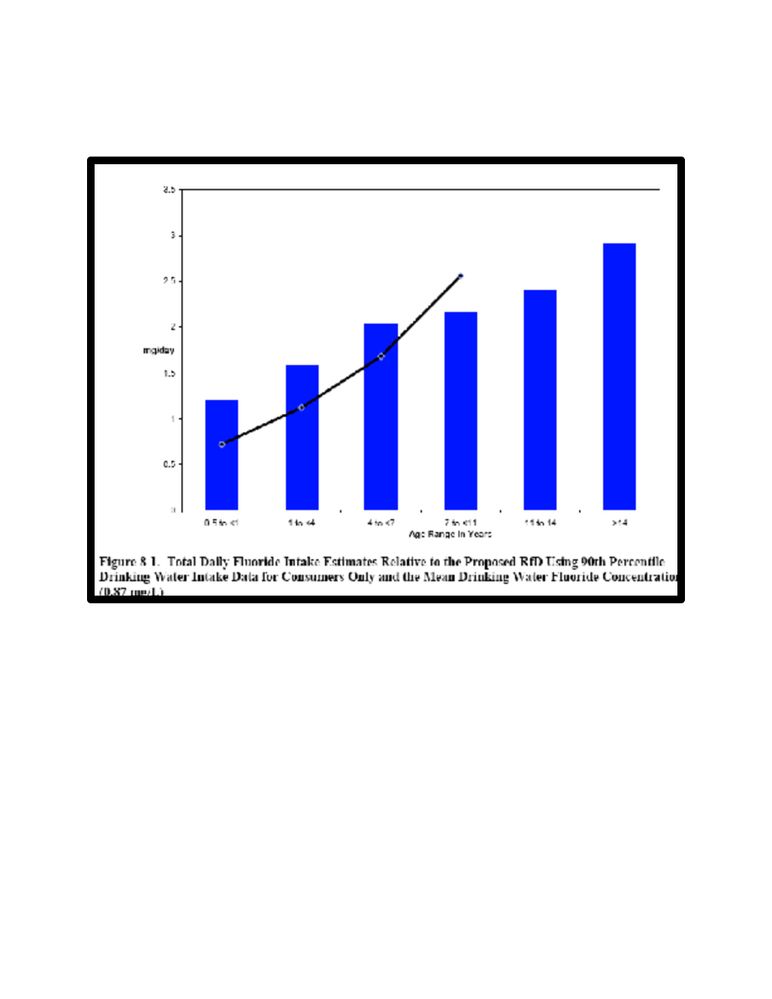 Report Inappropriate Content
1
Kudos
1075
Views
Reply
1 Kudo
Turn on suggestions
Auto-suggest helps you quickly narrow down your search results by suggesting possible matches as you type.
Showing results for
Search instead for
Did you mean:
Users
Announcements

Would you feel comfortable administering a test or using one at home?