The New Reality Of Old Age In America

The New Reality Of Old Age In America 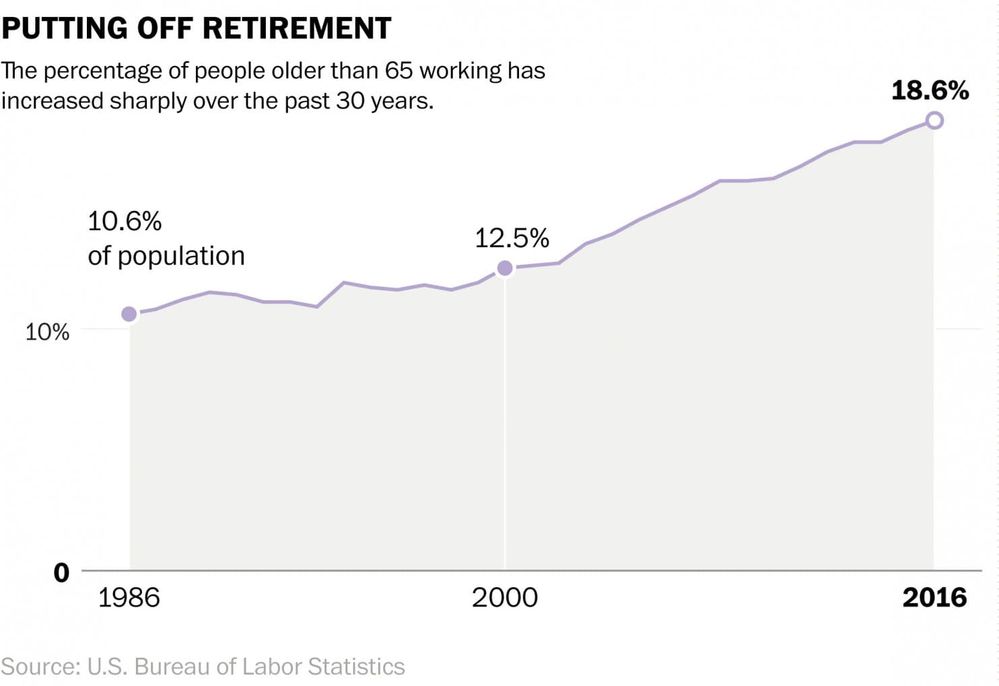 Richard Dever had swabbed the campground shower stalls and emptied 20 garbage cans, and now he climbed slowly onto a John Deere mower to cut a couple acres of grass.

“I’m going to work until I die, if I can, because I need the money,” said Dever, 74, who drove 1,400 miles to this Maine campground from his home in Indiana to take a temporary job that pays $10 an hour.

Dever shifted gently in the tractor seat, a rubber cushion carefully positioned to ease the bursitis in his hip — a snapshot of the new reality of old age in America.

People are living longer, more expensive lives, often without much of a safety net. As a result, record numbers of Americans older than 65 are working — now nearly 1 in 5. That proportion has risen steadily over the past decade, and at a far faster rate than any other age group. Today, 9 million senior citizens work, compared with 4 million in 2000.

While some work by choice rather than need, millions of others are entering their golden years with alarmingly fragile finances. Fundamental changes in the U.S. retirement system have shifted responsibility for saving from the employer to the worker, exacerbating the nation’s rich-poor divide. Two recent recessions devastated personal savings. And at a time when 10,000 baby boomers are turning 65 every day, Social Security benefits have lost about a third of their purchasing power since 2000.

"The key to success is to keep growing in all areas of life - mental, emotional, spiritual, as well as physical." Julius Erving
0 Kudos
1,940 Views
1
Share
Report
Reply

Sitting here with tears in my eyes after reading this article. Articles abound about this sad reality but none about what to do if you find yourself in this situation! Two weeks after I had surgery, my 70 year old husband lost his job! No pension, no 401K, just a thank you for your service! We're both on Social Security at the poverty line and with me needing physical therapy, our meds, rent, utilities and food, his job was just helping us break even. Who will hire an aged, arthritic security guard who qualifies for no government help? We are truly up the creek. How do we survive?

0 Kudos
1,610 Views
0
Share
Report
Reply
Turn on suggestions
Auto-suggest helps you quickly narrow down your search results by suggesting possible matches as you type.
Showing results for
Show  only  | Search instead for
Did you mean:
Users
Need to Know