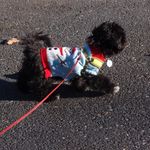 I once worked (for 6 months) for someone 13 years or more my junior, who had just been promoted to manage someone. On the 2nd or 3rd day of working with her, she said, "You know, you remind me of my older sister. We always fought and she always won."

Well I held out for 6 months trying to make that relationship work. First and only time I ever quit a job without something else to move onto. (Althought less than a week later, my Dad was diagnosed with lung cancer, so it was a blessing in disguise.)

Conversely, I have also worked for a 19 year old entrepreneur when I was 30-ish. That was fine! And I think I worked for him about 5 years.

I guess the other difference betweent the two jobs, is that entreprenuer gave me a specific task, allowed me to run with it, and was available for coaching when things got sticky. Very mature for a 19 year old...of course, he told me he was 28!

The female on the other hand, threw me to the wolves, demeaned and condescended when I couldn't read her mind, and felt that since she learned by herself on the job, I should too. (It was complicated, but the real issue probably was more she didn't know what she really wanted, so no matter what I did, she told me it was wrong. That was vexing. It was like one day, she'd tell me that the sky should always be painted blue. So I would repaint the sky blue for 8 hours. The next morning, she couldn't believe I didn't know the sky should be purple. Repaint the sky purple for 8hours. And then to your horror, on the following day, she wanted the sky blue again.  And so on, for 6 months.

Anyway...what wonderful lessons in humanity I have accrued, right? I doubt I will ever work for anyone like that again...like her personality template is seared with the soundtrac "danger Will Robinson" embedded in it.

Definitely. In a university setting you would expect that age, experience, and wisdom would be appreciated. The problem comes when we senior researchers and administrators were making much more than the young guys and gals that were being hired. It often became a matter of wanting to save money on salaries and having other young people around these new administrators.

I have a couple of scenarios to share. My career, as an educator, was damaged in my heart by a prinicpal who constantly brought up how much I made. Our salary scale was based on years of experience and additional education. I reached the top of the scale by hard work and many years of effort. I was good at my work. I retired several years before I wanted to because of this administrator-she was not a good people person and often went out of her way to hurt the feelings of her employees through belittling and snideness.

I have taken on an entry-level part-time job that keeps me busy and in pocket change with my volunteering. I have noticed that many of the young people who are in supervisory positions over me  have a strange way of talking down to me (and others, age plays no role in this. It is hard for me, however, to tolerate someone explaining to me how to count candybars or the like, when I am significantly beyone a master's degree in formal education with many hours of other training. I am a successful hard-worker-being back at the beginning level of a job is tricky stuff. I think I understand why there seem to be so many jobs available when so many people cannot find a job.

yes and i dont find many of them professional at all !!! i wonder how they landed their position.  the younger crowd today have no clue  about etiquette ,manners and most of all respect !!!!

I agree with the above comment. Their work ethic is poor due to lack of experience and discipline. Not all younger workers but the ones I have worked for. Also, they are 'yes' employees which is why they get promoted over an older worker who may question due to ethics and integrity.

Probably first thing to cross the mind of a geezer like me is this age discrimination because they make this whippersnapper my boss? While ageism does exist hopefully the company felt this younger person was a better fit for this position because of the skills and experience they have amassed unless it’s just the son/daughter-in-law of the CEO moving up through the ranks, what’d we expect.

From my experience I learned being cooperative and willing to share my skills and experience helps to build a mutually positive work environment even with the generational differences.

Ever.    Well let's see I am still working so that would be a definite yes.  Several times.  I have not had an issue so far.  But I have made it a point to discuss this issue in the beginning with each of them and I did not have a problem accepting supervision from someone younger. So far they have treated me as a resource as I have lots of experience and we have gotten along without issues.  I hope that continues.

Life's a Journey, not a Destination" Aerosmith
2 Kudos
5,627 Views
0
Share
Report
Reply
Turn on suggestions
Auto-suggest helps you quickly narrow down your search results by suggesting possible matches as you type.
Showing results for
Show  only  | Search instead for
Did you mean:
Users
Need to Know