I developed a computer program that runs on Windows and calculates the break-even age for two different social security claiming scenarios. You can run as many different scenarios as desired. The program file size is ~1.4 Megabytes and can be downloaded from google drive at https://drive.google.com/file/d/1R4TkJlhpH68D9_bdnca6uf8aQYOlPuvs/view?usp=sharing

As an example of the input/output see the screen shot below: 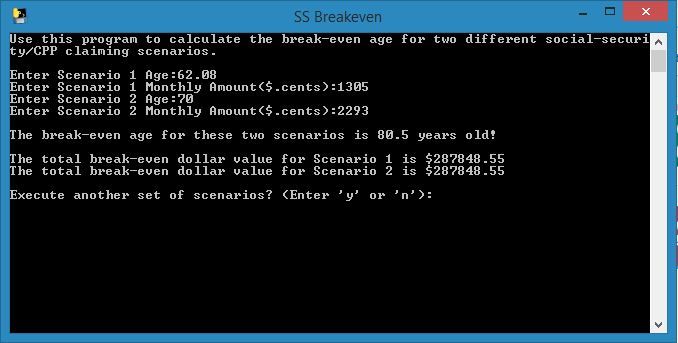 That's great, I'll give it a try. It looks like an executable file, is that right?

I think both approaches have issues they're overlooking.

(1) the break-even principle is fine but many people see SS as "longevity insurance", and I eventually subscribed to this principle. By accepting waiting to draw SS (and losing out now) there is the potential for a higher draw later...for a longer period of time. And for ones survivor as well, as they can benefit from the higher benefit due to delayed retirement credits. My spouse is 11 years younger than me so I plan to follow this approach. But every person has to investigate for their own situation and come to their own resolution.

(2) the commercial software "maximize my Social Security" (or any other non-commercial approach, as I used to do with spreadsheets) ignores the global picture. This software typically has you delay SS benefits in order to maximize benefits over a (statistical) lifetime. It is really slick software and I have the greatest regard for the author. But when you look at the entire picture, the global picture, of where your support comes from in the years where you're not getting SS then the amount of "maximizing" your SS benefit (at the detriment of other account balances on which you must draw) is greatly diminished...often to the point of virtually a wash. See, for example, the iORP software (free!) at www.i-orp.com.

Kotlikoff, author of MMSS, has other, more sophisticated software to address the issue I noted.

0 Kudos
6,013 Views
0
Share
Report
Reply
Turn on suggestions
Auto-suggest helps you quickly narrow down your search results by suggesting possible matches as you type.
Showing results for
Show  only  | Search instead for
Did you mean:
Users
Need to Know