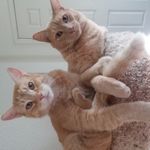 Phone scams: all robo calls, some have option to remove you from list. Each call originates from a different number, usually out of state, so blocking doesn't work.  Lately, I've had calls that, if I pick up, the caller immediately hangs up.

Emails: lately, I've been getting emails from "Amazon" saying that my account if going to be frozen. Since I rarely order from Amazon, I delete them without opening.

A few months ago, I almost fell for the scam that said my computer was infected. They even had a fake Microsoft logo. It makes such a loud noise and flashing screen that it's startling. Just turn off your computer and leave it off for about 10 minutes

Don't trust anybody. It's a sad state. I long for the pre-internet days, except that I can keep in touch with the people I want to, but even that is risky sometimes because I've had hackers take over a friend's profile on Facebook and act like they know me, and after awhile ask for money. Ask a personal question, like, "How is your sister doing?", knowing they don't have a sister.

Did you know that their are over 500 known scams? You can get scammed just by using the word yes. You can get scammed by answering questions  that appear to be innocent but have  severe consquences  they trap you with fear lies and intimidation. I like you trust no one they can spoof your caller id into thinking its a person business relative that you know. They try to make you think your grand kids are kidnapped and demand ransom they say their from your bank SS  and want you to put all your money to a green dot card and the list goes on and on. I worked with the police dept. and have heard all the horrors and tradgeies that these crooks have caused seniors and ill informed people.  Never ever believe microsoft calls. banks SS or any other finicial institutions  if you think about it hang up and call these places just like if they a claim to have kidnapped your grand kids call your kids to see if the grand kids are out of state or country. Remember they are calling you if they say is this Mrs Jones reply speaking instead of yes and never ever buy a green dot or mechendising account for some one that calls you, you will never see that money again. Also buy a cross cutting shredder and remove all labels from medicine bottles they contain a wealth of information these a just a few tips I can offer you if something doesn't sound right in probably isn't  think before you act the money and personal info you save is your own lastly if they intimidate you with fear and start to describe you house what they are doing is running up your address on google earth a fairly used scare tactic  call the police  hope some of this helps

Wow @GaryT58030 I didnot know about the yes scam. 😱 The prescription bottles and shredding I do. Angela

1 Kudo
1,299 Views
0
Share
Report
Reply
Turn on suggestions
Auto-suggest helps you quickly narrow down your search results by suggesting possible matches as you type.
Showing results for
Show  only  | Search instead for
Did you mean:
Users
Need to Know