Sign up for our twice-monthly Your Health newsletter for the latest on the coronavirus pandemic and more. 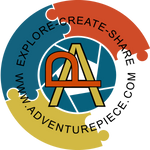 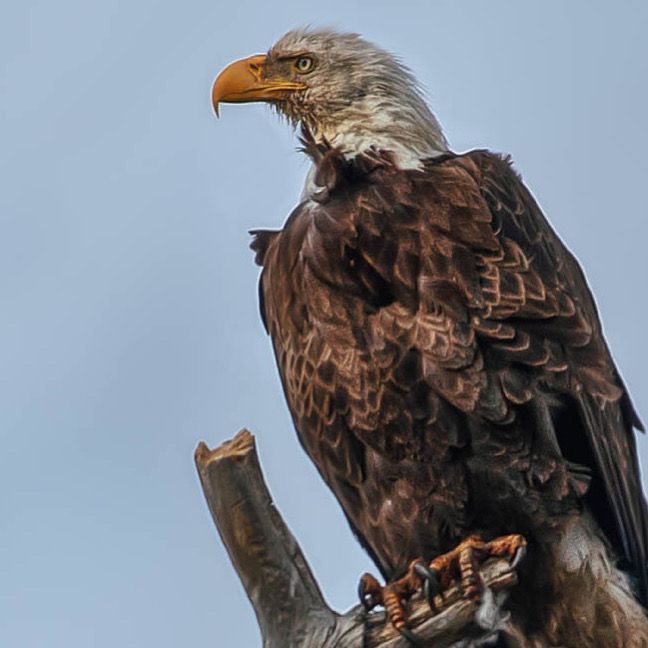 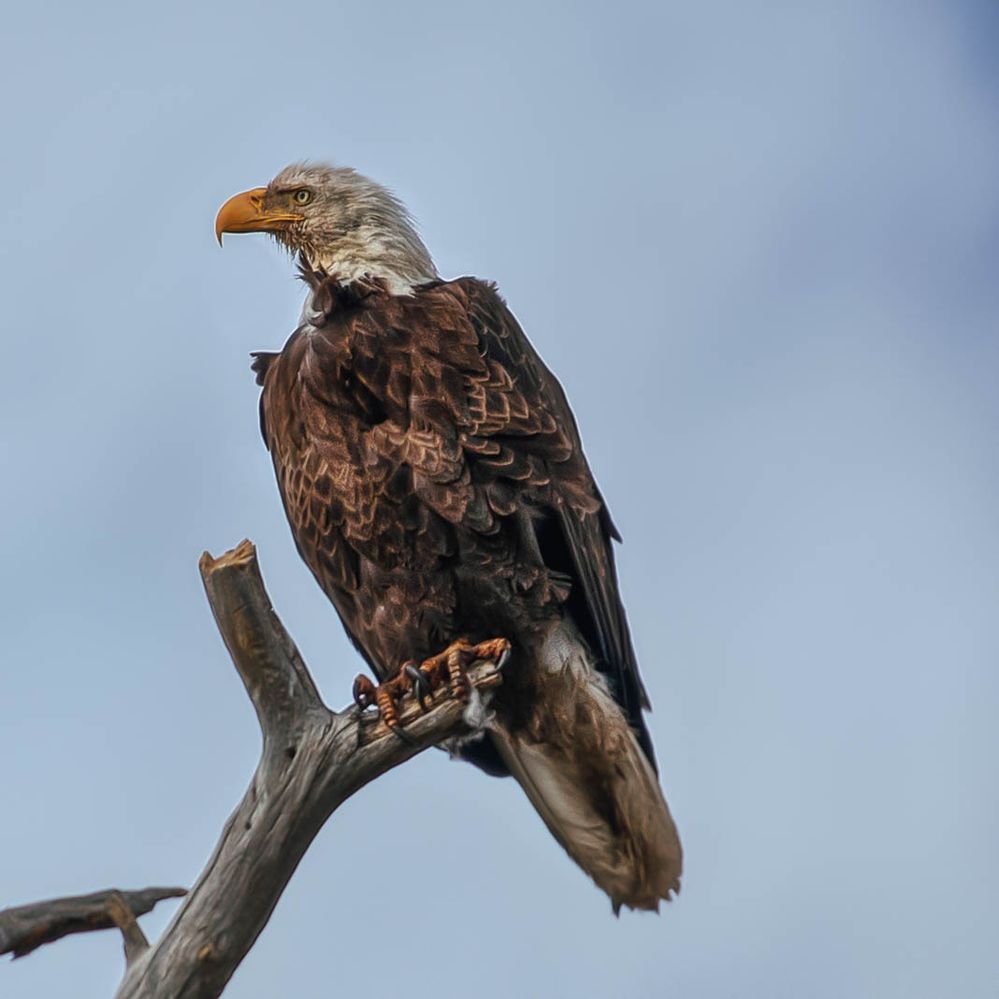 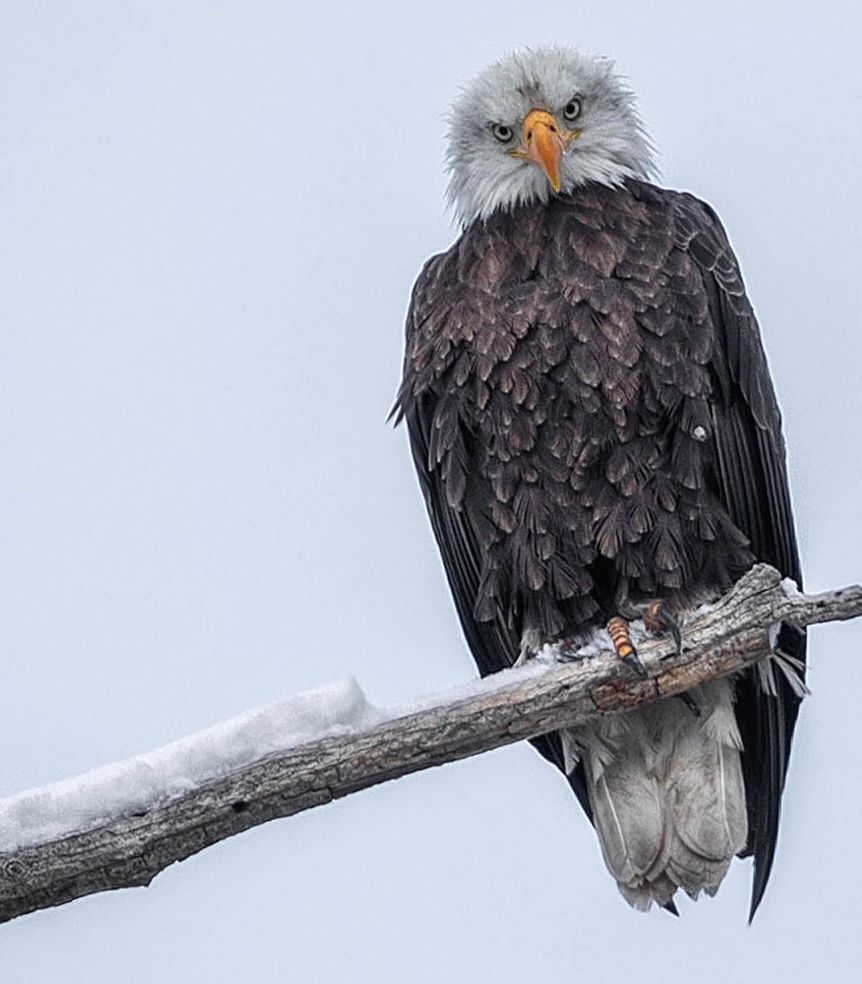 Do the young return with the adults in the spring of the next year?
Bald eagles start migrating at a young age, but the reasoning behind the migration is unknown. Some fledgling eagles migrate in a wide range for their first few years. Some return to their origin, some do not. No one knows if this is a conscious decision on the eaglets’ part, or if some just simply lose their way.

How can I tell if an eagle is a male or female?
The most obvious difference between a male and female bald eagle is the bird’s size. Females tend to weigh more than males, have a larger wingspan, and have a body about a third of the size larger than a male bald eagle.

When do bald eagles get their white head?
Bald eagles are not born with white heads. Their feathers are mottled light and dark brown and patches of white, and it is not until around age 4 or 5 that white feathers replace the brown on the head and the tail. This is a sign of sexual maturity.

Where do bald eagles go in the winter?
Unlike other birds, bald eagles do not migrate for temperature reasons. For the most part, bald eagles can withstand cooler temperatures. However, when the lakes and rivers freeze over, the birds lose their main source of food, and so they begin to migrate to the coast or large rivers near dams, where the water remains open. Wind patterns play a large role in where bald eagles end up migrating. Bald eagles in Florida do not tend to migrate; they stay near their nests all year round. Northern bald eagles migrate south in the fall and return north in the winter.
Is the bald eagle at Bay City State Recreation Area the same one as last year?
Yes.  The park’s bald eagle pair has been nested in the park for 3 out of the past 4 years, 2013, 2015, 2016.  In 2014 the Bald Eagles tried nesting on the island down shore from the park at the mouth of the Saginaw River.

How far should I stay from a bald eagle nest?
Bald eagles can be very sensitive to human behavior... Federal law requires you to stay at least 330 feet away from any nest. This distance is also true for individual eagles that may be perched on a tree or standing on the ground.  During nesting season, bald eagles are the most intolerant of human interaction. Bald eagles that feel threatened by humans, especially during their nesting season, may abandon their nest.  To insure that the eagles do not cause you harm or become harassed and abandon their nest please keep a safe distance from the nest, and use binoculars to observe the nest and the eagle.

Will a bald eagle attack a human?
Bald eagles have been known to attack humans, but the injuries inflicted are hardly lethal. During mating seasons, bald eagles become much more territorial. As with any other bird of prey, it best to keep a safe distance from a bald eagle and to respect the bird’s space. On the off chance an eagle does start stalking you, it is best to put your hands up and make yourself as big as possible.

How many fish do they typically eat?
The average bald eagle needs about ½ to 1 pound of food a day. However, a bald eagle does not always eat every single day. When food sources are scarce, a bald eagle can gorge on food and hold up to 2 pounds of food at a time.

What do bald eagles typically eat?
Bald eagles mainly eat fish and carrion – dead fish and road kill/decaying carcasses of animals. During the winter months local bald eagles will small mammals, like squirrels and rabbits and waterfowl.  Bald eagles are birds of opportunity, so whenever possible, they will steal food that was already caught/hunted by other birds of prey.

Why did I see a bald eagle on the highway?
Bald eagles are often seen eating road kill during the winter when fish supplies are unavailable.

Why are young eaglets banded?
Eaglets are banded in order to easily track their migration habits, lifespan, movement patterns, and whether or not the bird stays in the same nest year after year.

How long does a bald eagle egg take to hatch?
The female will lay the egg 5-10 days after mating, and then the eggs are incubated for about 35 days.

How old is an eaglet when it first starts to fly?
Eaglets cannot fly until 10-13 weeks after hatching. This is because they are born with downy feathers all over their body, which are useless in flight. An eaglet must grow stiff-shafted, juvenile flight-feathers before being able to take flight.

When do bald eagles’ eggs usually hatch?
Eggs are laid during different times of the year, depending on the location of the parent bald eagles. In Michigan eagles will lay their eggs from late March to early April.  One to four (average two) pure white eggs, approximately twice the size of a chicken egg, are laid. In northern Canada and Alaska, eggs are typically laid in May. In Florida, eggs are laid from November through January. After the egg is laid, they hatch about 35 days after being laid.

How high do bald eagles usually build their nests?
Bald eagles’ nests are found about 50-120 feet off the ground with an average depth of about 2-4 feet and a diameter of about 6-10 feet. The largest recorded bald eagle nest was in St. Petersburg, Florida. It weighed almost three tons and was 20 feet deep and 10 feet in diameter!

How do bald eagles build their nests?
The male and female both gather the supplies needed to build the nest: moss, grass, twigs, sticks, lichen, etc. However, the female tends to be the one that does the placing and organizing of the nest materials.
Thank you for viewing my art. Chuck Taylor
2 Kudos
828 Views
0
Share
Report
Reply
Turn on suggestions
Auto-suggest helps you quickly narrow down your search results by suggesting possible matches as you type.
Showing results for
Show  only  | Search instead for
Did you mean:
Users
Announcements