DIETHYLSTILBESTROL (DES) FROM Discovery to Today

The story of DES began in 1938, when British physician and chemist Sir Charles Dodds and his team of scientists synthesized DES from a coal-tar derivative. DES, the first synthetic oral form of estrogen, mimicked the effect of natural estrogen. The chemical formula is actually very simple. DES was not patented because Dr. Dodds’s discovery was funded by the British government with a policy that inventions from government sponsored research should be available to all.

There was enormous excitement around unlocking the secret of hormones, and DES was considered a great discovery. Until then, estrogen was extracted from animal urine, a painstaking process. In contrast, DES could be made cheaply and manufactured as pills or tablets. Dodds advocated DES solely for menopausal symptoms.

In 1940, a French medical journal reported that DES caused mammary tumors in male mice. However, by the early 1940s Harvard Medical School obstetrician’s Dr George and Olive Smith were extolling the merits of DES for use during pregnancy-in the mistaken belief that high estrogen levels could prevent miscarriage. Medical students further spread the word about DES, and pharmaceutical sales reps boosted its sales.

The popularity of DES spread to Canada, Europe, Australia, and beyond. DES was so popular it became a wonder drug-widely prescribed to prevent miscarriage, given as "vitamins," and prescribed, "just in case," to make stronger, healthier babies. DES was used to treat over 100 conditions. It was fed to livestock as a growth stimulator, then showed up in hamburger, veal, and chicken. It was prescribed to suppress lactation after childbirth, distributed by college clinics as the morning-after pill, given to tall teenage girls to stunt height, and to transsexuals to prepare for sex change. It was used for treatment of acne, gynecological disorders, breast cancer, and prostate cancer. DES was used so broadly; it begs the question: How many of us are DES-exposed? 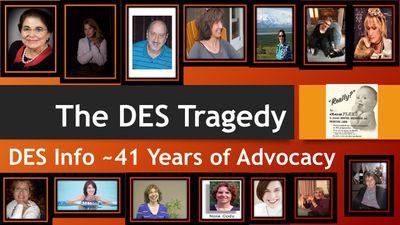 (For the full document, it is available on Facebook’s DES Tragedy page in the file section)

KMFDallas
0 Kudos
1,965 Views
0
Share
Report
Reply
Turn on suggestions
Auto-suggest helps you quickly narrow down your search results by suggesting possible matches as you type.
Showing results for
Show  only  | Search instead for
Did you mean:
Users
Need to Know