A negative ion generator is an electronic device for purifying indoor air. It imparts a negative electric charge to air molecules which, in turn, imparts a charge to floating particles in the air. Then these particles are attracted to and deposited on surfaces such as those of walls and furniture but especially to conductive surfaces. There is no filter and the amount of ozone generated is negligible.

Circa 1983, I bought a negative ion generator for about $7.  After several months use, it made my bedroom walls noticeably dirty. Although that proved that it worked, I didn't want to repaint my walls every year so I stopped using it.  I suspect that that is the reason why negative ion generators aren't popular.

Recently, it occurred to me that negative ion generators might suppress transmission of airborne covid-19 in nursing homes, prisons, meat packing plants, etc.. I found this:

In some situations, as where dust may carry microorganisms, negative air ionization can be used to reduce infections by precipitating the dust out of the air, such as in poultry houses (Gast et al., 1998; Petkov et al. 1987). Some success has also been reported in burn wards, classrooms, and dental offices (Gabbay, 1990; Makela et al., 1979). Negative air ionization has the potential to reduce the concentration of airborne microorganisms. The effect appears to result from the ionization of bioaerosols and dust particles that may carry microorganisms, causing them to settle out more rapidly. Settling tends to occur on horizontal surfaces, especially metallic surfaces, and generally in the area near the ionization unit. Ionization may enhance agglomeration, creating larger particles out of smaller particles, thereby increasing the settling rate. Ionization may also cause attraction between ionized particles and grounded surfaces. In situations where dust may carry microorganisms, negative air ionization can be economical to use to reduce infections. It has been used economically to reduce the incidence of Newcastle disease virus in poultry houses (Mitchell, 1994). Poultry houses can be notoriously dusty. Figure 16.2 shows the colony forming units(cfu) measured with and without ionization in a dental clinic by Gabbay (1990). Airborne microbial levels were reduced by 32 to 52 percent with ionization. He also found that horizontal plates picked up considerably more cultures than vertical plates, strongly suggesting that settling out of ionized particles was the primary mode of removal. 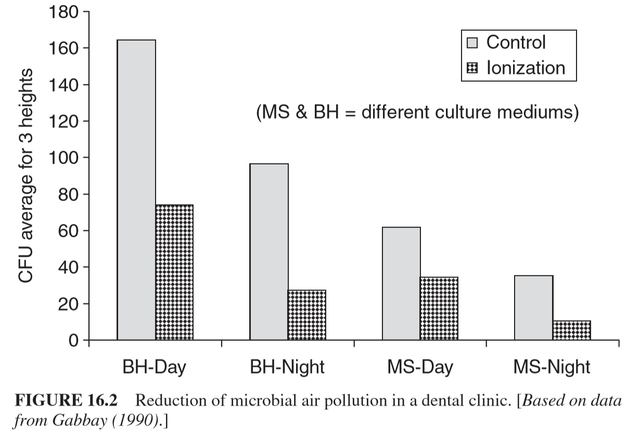 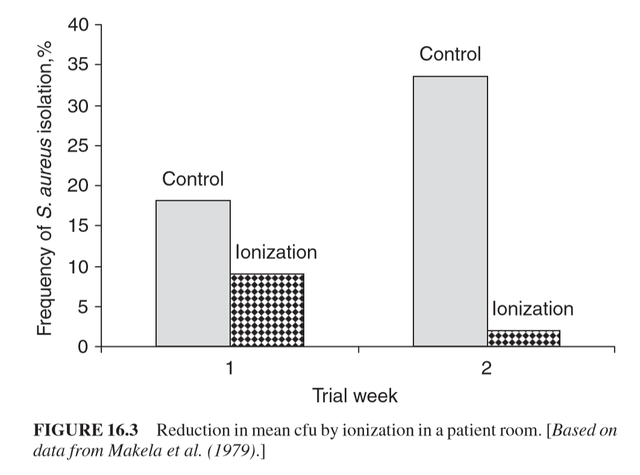 Figure 16.3 summarizes the results of studies by Makela et al. (1979), who found that bacterial aerosols in patient rooms of a burns and plastic surgery unit could be reduced with air ionization. Variations in the bacterial levels were associated with bed changing and other room activities. The humidity in the rooms was low, which may have enhanced the effect. In Fig. 16.4, also based on results from Makela et al. (1979), specifically identified Staphylococcus aureuslevels in a room with and without ionization. The average for 2 days 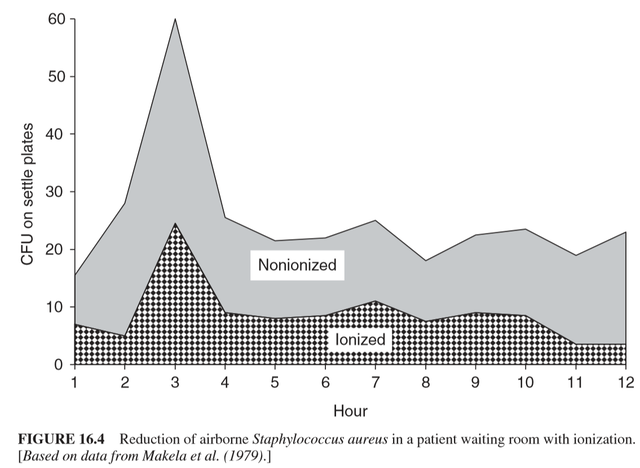 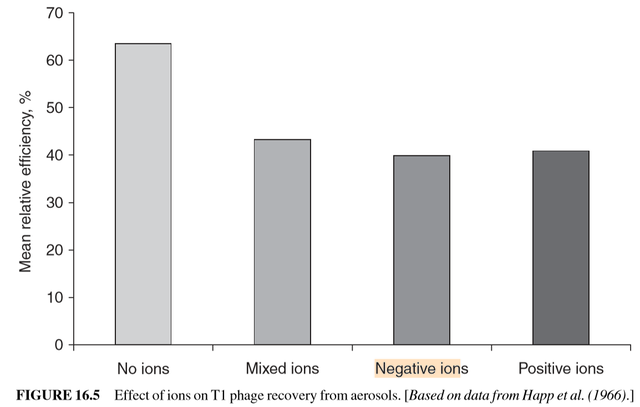 of monitoring indicated a definitive reduction in airborne levels. S. aureus is a potential nosocomial infectious agent of wounds and burns. Figure 16.5 summarizes some results from Happ et al. (1966), who found that levels of aerosolized virus T1 bacteriophage were reduced under various types of ionization, which included mixed ions, negative ions, and positive ions. All three types of ionization had comparable results in terms of reducing airborne levels. The method used involved measuring the filtration efficiency, and in which lower filter efficiencies demonstrated lower recoveries from the air. These lower recoveries suggested either that the phage was not present in the air or had perhaps been inactivated. Most of the effects of negative air ionization can be explained in terms of agglomeration and the ensuing precipitation of the heavier particles out of the air (Lehtimaki and Graeffe, 1976; Mitchell, 1998). Some evidence suggests that ionization may inhibit microbial growth or that it may have some biocidal effects (Krueger et al., 1957; Krueger and Reed, 1976; Phillips et al., 1963). The biocidal effects may actually be due to the generation of radicals but insufficient information is available to quantify this effect. The growth of cultured bacteria and the viability of bioaerosols were reduced by negative ion concentrations of 50,000 to 5,000,000 ions/cm3 per Phillips et al. (1964). Tanimura et al. (1997) demonstrated that growth of E. coliwas inhibited by 1,000,000 ions/cm3 but that no effects occurred with levels below 100,000 ions/cm3. Negative air ionization may also be able to reduce microbial contamination on surfaces (USDA, 2000). Ionization may enhance the biocidal effects of ozonation, possibly due to increased generation of radical species. As shown in Fig. 16.6, the combination of ionization with low levels of airborne ozone provides higher inactivation rates or removal rates than ozone by itself. According to Fan et al. (2002), ozone levels of about 0.1 ppm (100 nL/L) combined with negative ionization levels of 1,000,000 ions/cm3 produced much higher rates of disinfection for several bacterial species than ozone alone. Ozone concentrations of 0.03 ppm combined with 3,000,000 ions/cm3 was effective in killing 98 percent of S. aureuson plates after 72 hours of exposure (Li et al., 1989). Tanimura et al. (1997) also report that negative air ionization enhanced the effectiveness of ozone at inhibiting microbial growth. The attempt to use ozone in combination with negative air ionization to control surface mold in fruits has met with limited success (Fan et al., 2002; Hildebrand et al., 2001). The ability of high levels of negative ions to reduce air and surface levels of Salmonella enteritidis in a laboratory test was demonstrated by Seo et al. (2001). Tests indicated better than a 90 percent reduction on all surfaces except the top, which had a 72 percent reduction. Researchers report that most of the effect is through direct killing of the bacteria. Arnold and Mitchell (2002) report on a laboratory test in which negative air ionization effectively decreased the survival levels of bacteria on stainless steel, with a reduction efficiency of 99.8 percent. Mitchell and Waltman (2002) studied the use of an electrostatic space charge system in a commercial broiler hatchery to reduce airborne pathogens that may lead to disease transmission during the hatch. The system transfers a strong negative electrostatic charge to dust and microorganisms that are aerosolized during the hatch and collects the charged particles on grounded surfaces. In studies with three poultry companies, the system achieved 93 to 96 percent reductions of airborne Enterobacteria, and reduced airborne Salmonellaby 33 to 83 percent. Davies and Breslin (2003) reported that an ionized air generator cabinet had negligible effect in reducing surface contamination of Salmonella on eggs. Lee et al. (2004) studied the ability of negative and positive ions to remove fine particulates from an indoor environment. They found that a density of 105 to 106 electrons/cm3 of either positive or negative ions would reduce airborne particulates in the 0.1- to 1-µm size range by about 95 to 97 percent after 30 minute. They also noted that high ion densities could produce static charges in the room.

1. Theoretically, negative ions would improve the ability of face masks to filter out airborne covid-19, i.e., protect the wearer, especially if the masks were made electrically conductive by lightly coating with a humectant such as glycerol.

4. Some negative ion generators are inexpensive, some not, e.g., see

5. If I had a friend living in a nursing room, I would gift them a negative ion generator.

0 Kudos
2,443 Views
0
Share
Report
Reply
Turn on suggestions
Auto-suggest helps you quickly narrow down your search results by suggesting possible matches as you type.
Showing results for
Show  only  | Search instead for
Did you mean:
Users
Need to Know