Four Cases per the Journal of Clinical Endocrinology and Metabolics 1004 (1959)....yet the Tragedy continued.

The producers of DES (Diethystilbestrol) made no effort to alert the government or the medical community of the drug's dangers!

In a DES Breast Cancer case conducted it Boston it was said that “During the period defendants marketed DES, they knew or should have known it was a carcinogenic substance, that there was a grave danger after varying periods of latency it would cause cancerous and precancerous growths in the daughters of the mothers who took it, and that it was ineffective to prevent miscarriage.

Nevertheless, defendants continued to advertise and market the drug as a miscarriage preventative.

They failed to test DES for efficacy and safety; the tests performed by others, upon which they relied, indicated that it was not safe of effective.

In violation of the authorization of the FDA, defendants marketed DES on an unlimited basis rather than as an experimental drug, and they failed to warn of its potential danger” The DES exposed are still awaiting an apology for this tragedy! 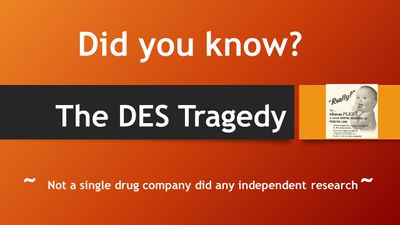 KMFDallas
0 Kudos
2,153 Views
0
Share
Report
Reply
Turn on suggestions
Auto-suggest helps you quickly narrow down your search results by suggesting possible matches as you type.
Showing results for
Show  only  | Search instead for
Did you mean:
Users
Need to Know