I was born in New Zealand and I’m currently based in London UK. For as long as I can remember I’ve had a kind of partially feminine gender identity, but until recently never consciously acknowledged it. Then, a couple of years ago I realized my body language, my pattern of arousal and orgasm, and my instinctive social behavior are all very much more like what you’d typically see in a woman rather than a man - and that I have a body that’s a bit like a cross between a man’s and a woman’s too!

Through research I’ve learned this is known as a "eunuchoid habitus", and is something seen in intersex cases. I have a feminine appearance with long, slender arms and legs and a female leg to trunk ratio, described as long legs with a comparatively short upper body. Overall I look quite different from the males in my family and a lot more like my mother and sisters. In short, I’m not just psychologically intersexed because something unusual seems to have happened to my physical development too. But what?

The sex-determining chromosome, the Y chromosome, tells our undifferentiated gonads to turn intotesticles (without it they'll turn into ovaries instead). All the genetic blueprints for actually building a male or female body are located elsewhere in your genome, so everyone has the full set of instructions for both sexes.

Ordinarily this system works quite well and you'll develop as one sex throughout the pregnancy But as I now understand it, certain conditions can cause a male fetus to underproduce (or a female fetus to overproduce) testosterone causing the developing body to follow a mixture of male and female instructions. With most intersex conditions, the abnormal hormone situation tends to be there throughout the pregnancy.

In my case, there seem to have been normal male levels of testosterone to start with and towards the end of the pregnancy too, but for a period of very low testosterone in the middle.

Then I read a passage in Brain Sex: The Real Difference Between Men and Women, by Anne Moir and David Jessel describing a pattern of behavior commonly shown by teenage boys who were prenatally exposed to DES. The boys were described as typically shy, socially withdrawn, lacked self-esteem, were regarded as sissies, bullied, ostracized by their peers, had no ability to fight back when attacked and no interest in sport.

The authors depicted it as “feminized behavior” and it matched my teenage years so closely it could have come straight out of my school report!

DES and artificial female hormones in general are good at suppressing testosterone production in adult men. Why wouldn’t they have the same effect on a male fetus? The dose of DES required to completely stop testosterone production in prostate cancer patients is 3mg per day; the starting dose for miscarriage prevention was 5mg per day. DES Sons have the emotionally comforting knowledge that what happened to them was done to prevent miscarriage because their mothers desperately wanted and loved them.

But that’s not my circumstance. There was no medical reason for my mother to have been given DES and in fact, I suspect she most likely took an overdose of contraceptive pills in a failed attempt to end the pregnancy. As I see it, that could have severely disrupted my developing endocrine system so for a few weeks testosterone levels were limited. For a variety of reasons I’m fairly sure that’s what happened.

Since coming to that realization I’ve been trying to learn as much as possible about prenatal hormonal disruption and I feel a kindred spirit with the DES Sons I’ve connected with. Many seem to share similarities with me, including genital abnormalities, feminized behavior as teenagers, endocrine issues and gender variance. Several have also mentioned having a feminine appearance, leading me to speculate that both brain development and physical appearance may be linked to prenatal hormonal exposures of varying kinds.

One thing I’ve noticed, though, is that many of the gender variant DES Sons I’ve come in contact with seem to be more psychologically female than I am, and more fully identify as women than I do. Could DES use have resulted in more male to female transsexuality than would have otherwise occurred in the population? I certainly wonder.

With the growing understanding of damage caused by DES and the fact that it started serious investigation of endocrine disruption issues, I’m writing in acknowledgment that DES sparked this interest even though sadly, it did so much harm. I thank researchers for uncovering truths and hope they continue their studies not only into DES but also into other hormones and endocrine disruptors.

My situation raised questions for me and I believe the answer is in what happened before I was born. While not a DES Son, I feel a kindred spirit with individuals dealing with gender variance issues. 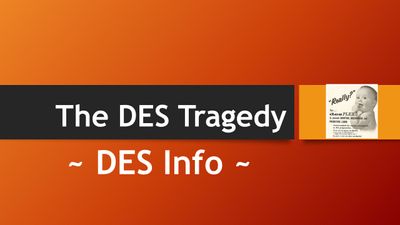 KMFDallas
0 Kudos
1,675 Views
0
Share
Report
Reply
Turn on suggestions
Auto-suggest helps you quickly narrow down your search results by suggesting possible matches as you type.
Showing results for
Show  only  | Search instead for
Did you mean:
Users
Need to Know