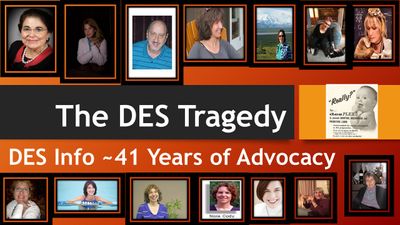 DES Info: Join us in honoring 41 years of Advocacy for the DES Exposed Community as part of this year’s - DES Awareness week!

■ Clear cell adenocarcinoma of the cervix with a concurrent polymerase-Ɛ (POLE) somatic mutation.

■ Association of Exposure to Diethylstilbestrol During Pregnancy with Multigenerational Neurodevelopmental Deficits

■ Birth defects in children of men exposed in utero to diethylstilbestrol (DES). Suggests an increased incidence of two male genital tract defects in sons of men prenatally exposed to DES

Scientists have now discovered that this drug changed specific DNA in those exposed in utero to DES.  It has now been shown to be a multigenerational mutagen and health concerns have been noted into the third generation.  Millions of DES Mothers, Daughters, Sons and Grandchildren are dealing with these effects every day and many have lost their lives due to their exposure.

The DES (Diethylstilbestrol) Tragedy began in 1938, when British physician and chemist Charles Dodds and his team of scientists synthesized DES from a coal-tar derivative. DES, the first synthetic oral form of estrogen, mimicked the effect of natural estrogen.

Between 1941 and into the 1970s, millions of pregnant women in the United States were prescribed DES (Diethylstilbestrol) to prevent miscarriage.  It is now known that it did not work as thought and did not prevent miscarriage.  DES is a known carcinogen and teratogen that has affected millions around the world.

In the early 1970s, doctors in Boston identified a rare, sometimes fatal, vaginal cancer in teenage girls. The cancer had never been seen in women so young. The common denominator was the DES prescribed to the girls' mothers during pregnancy. The implications were terrifying. Millions of young people might experience disease, after an unknown period of time, from exposure before birth to a carcinogenic prescription drug. The media billed DES "The Time Bomb Drug." As doctors began seeing exposed daughters and sons, they discovered that DES also causes a wide range of reproductive tract injuries.

I knew it would happen sooner or later w/ DNA-Meds...as Science has Over-Intellectualized Their-Research...ie Einstein's-Insanity!!

Until Simpler, Cheaper, Quicker, & Safer [compared to DNA-Meds]-Research is Done on the Mainstream *Meat & By-Product Diet* VS a *Vegan & Raw-Foods Diet* & their Effects on Health, Healing, & Well-Being>No-Cures will be Found!! These-Diets are Polar-Opposites>Nothing affects One's Health-More than Food-Eaten!!

KMFDallas
Regular Contributor
Unfortunately, DES was in our food for many years
KMFDallas
1 Kudo
2,487 Views
0
Share
Report
Reply
Turn on suggestions
Auto-suggest helps you quickly narrow down your search results by suggesting possible matches as you type.
Showing results for
Show  only  | Search instead for
Did you mean:
Users
Need to Know