The IRS decides to audit Grandpa, and summons him to the IRS office. The IRS auditor was not surprised when Grandpa showed up with his attorney. The auditor said, ‘Well, sir, you have an extravagant lifestyle and no full-time employment, which you explain by saying that you win money gambling. I’m not sure the IRS finds that believable.’

‘I’m a great gambler, and I can prove it,’ says Grandpa. ‘How about a demonstration?’

The auditor thinks for a moment and says, ‘Okay. Go ahead. ‘

Grandpa says, ‘I’ll bet you a thousand dollars that I can bite my own eye.’

The auditor thinks a moment and says, ‘It’s a bet.’

Grandpa removes his glass eye and bites it. The auditor’s jaw drops.

Grandpa says, ‘Now, I’ll bet you two thousand dollars that I can bite my other eye.’

The auditor can tell Grandpa isn’t blind, so he takes the bet.

Grandpa removes his dentures and bites his good eye. The stunned auditor now realizes he has wagered and lost three grand, with Grandpa’s attorney as a witness. He starts to get nervous.

Advertisement
‘Want to go double or nothing?’ Grandpa asks ‘I’ll bet you six thousand dollars that I can stand on one side of your desk, and pee into that wastebasket on the other side, and never get a drop anywhere in between.’

The auditor, twice burned, is cautious now, but he looks carefully and decides there’s no way this old guy could possibly manage that stunt, so he agrees again. Grandpa stands beside the desk and unzips his pants, but although he strains mightily, he can’t make the stream reach the wastebasket on the other side, so he pretty much urinates all over the auditor’s desk.

The auditor leaps with joy, realizing that he has just turned a major loss into a huge win. But Grandpa’s own attorney moans and puts his head in his hands.

‘Are you okay?’ the auditor asks.

‘Not really,’ says the attorney. ‘This morning, when Grandpa told me he’d been summoned for an audit, he bet me twenty-five thousand dollars that he could come in here and pee all over your desk and that you’d be happy about it.’ 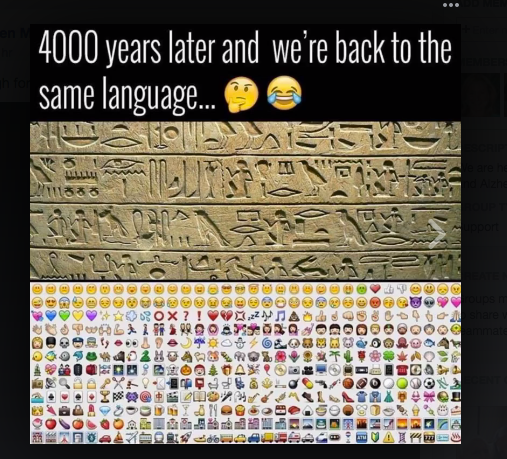 Anyone else have a dog that does this? 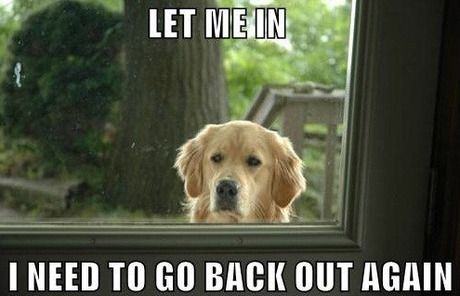 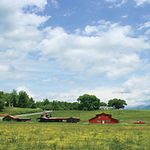 A couple are sitting in their living room, sipping wine. Out of  the blue, the wife says, “I love you.”

“Is that you or the wine talking?” asks the husband. 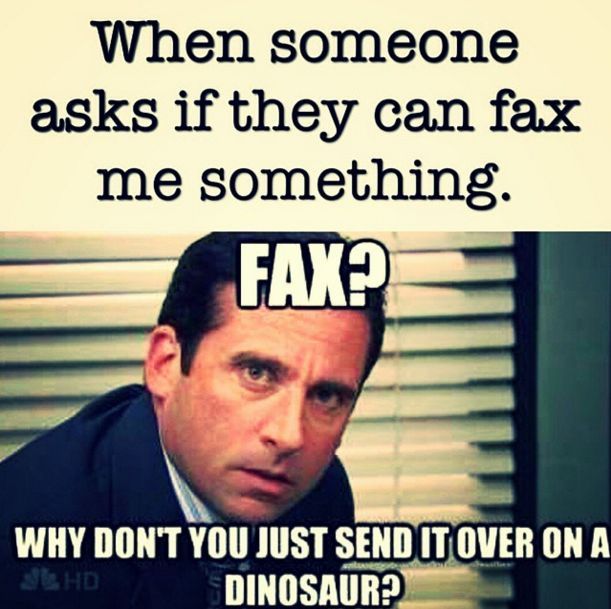 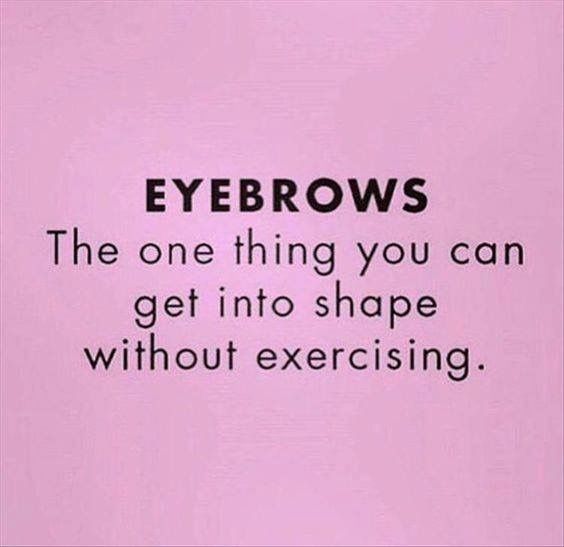 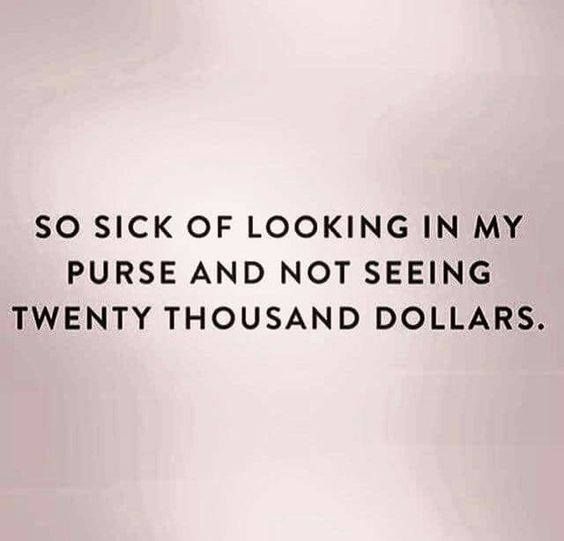 Been a few busy weeks, but here is a laugh for you today! 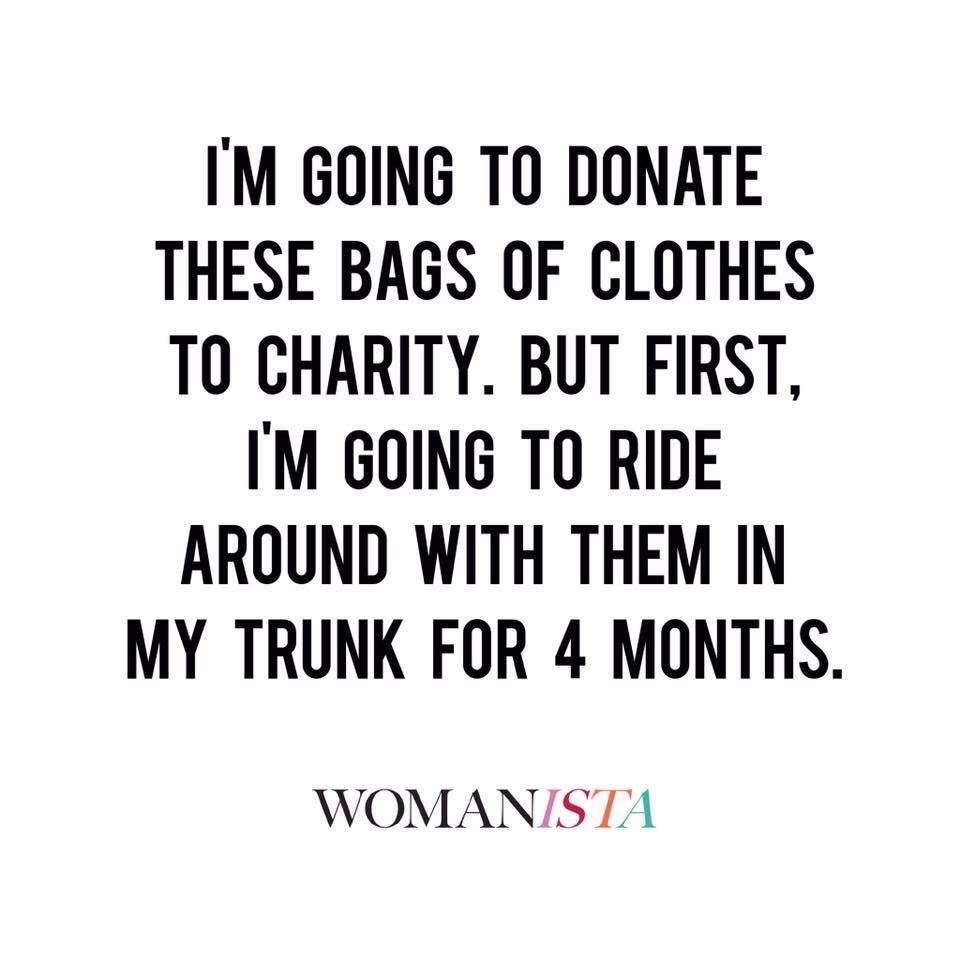 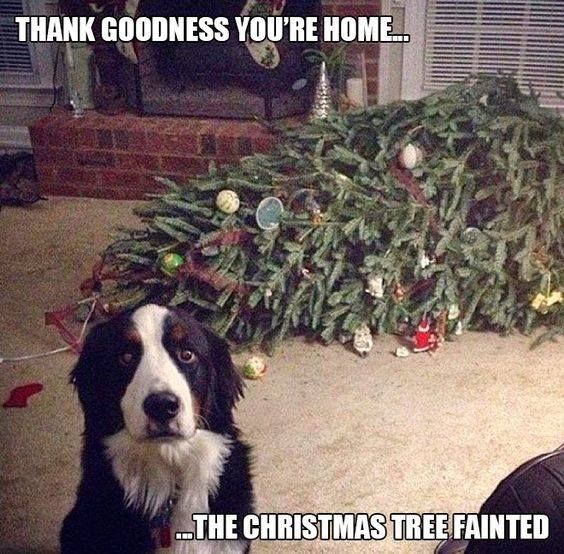 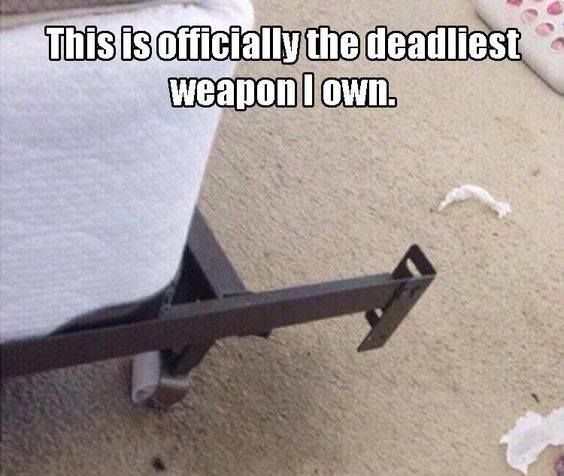 Oh my gosh this is SO TRUE!!! I have scars from those things!

Don't forget to change those clocks back this weekend! 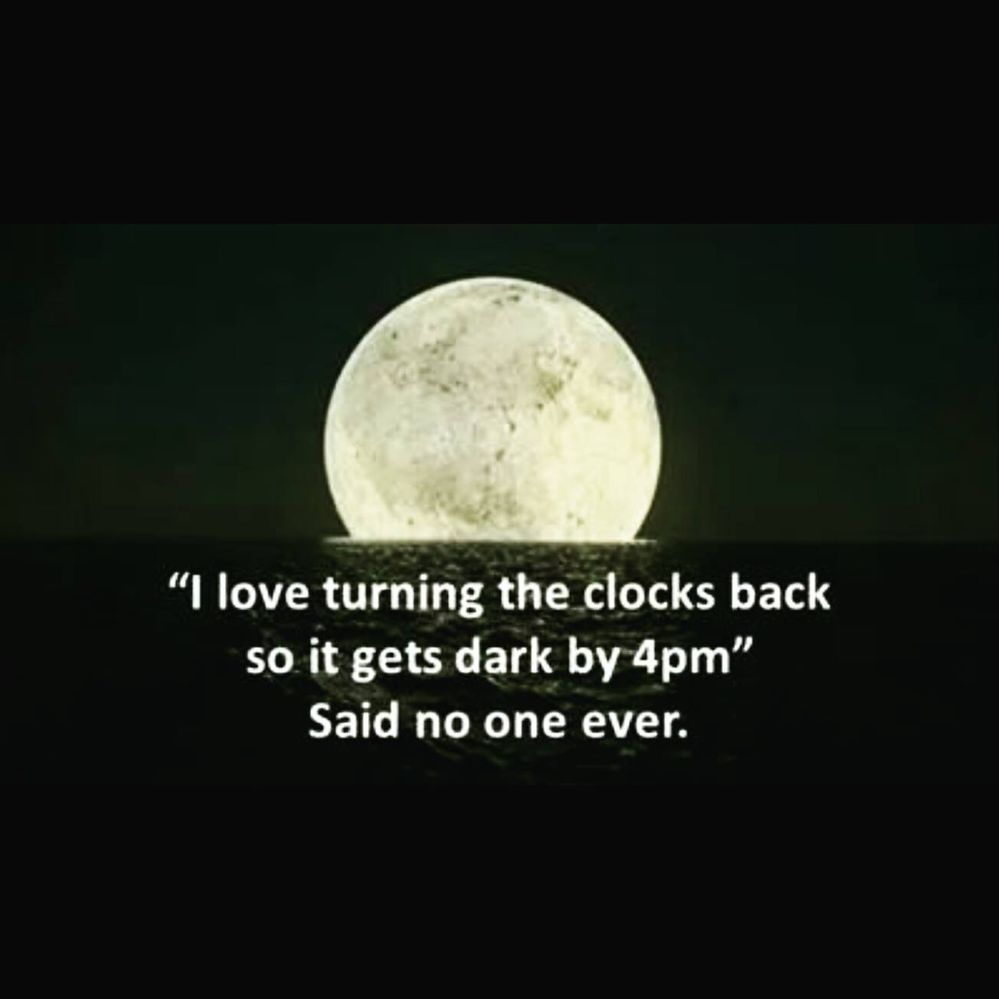 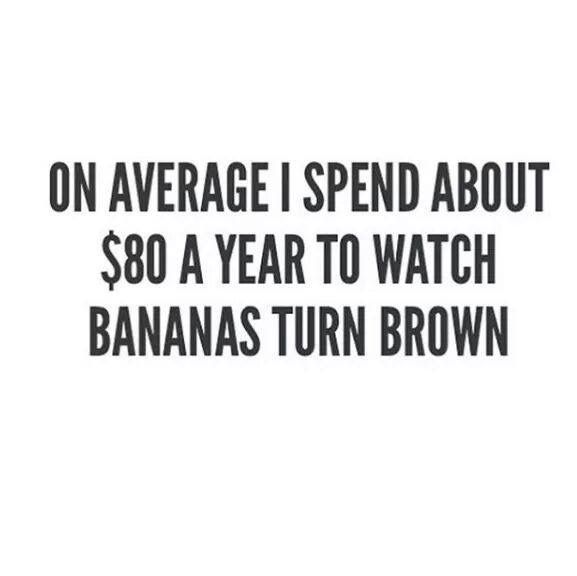 When it comes  to candy bars, the term fun-sized  is misleading. There is nothing fun about your candy bar being ⅛ the size of a regular bar. You should call them what they are:  “disappointment-sized.” 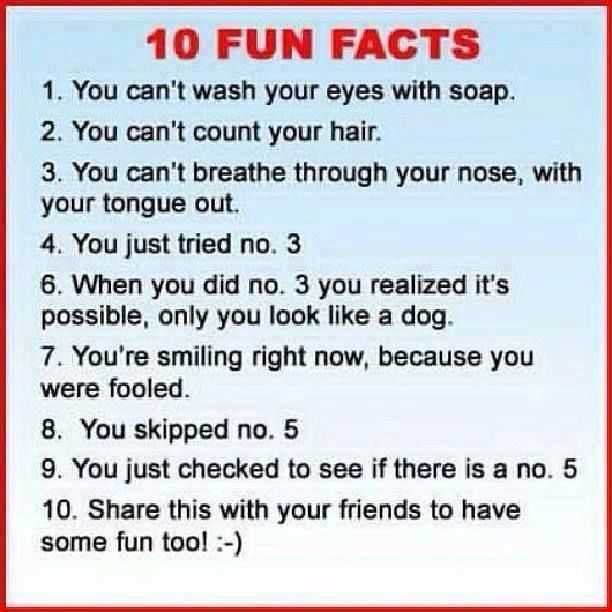 More laughs coming at you! 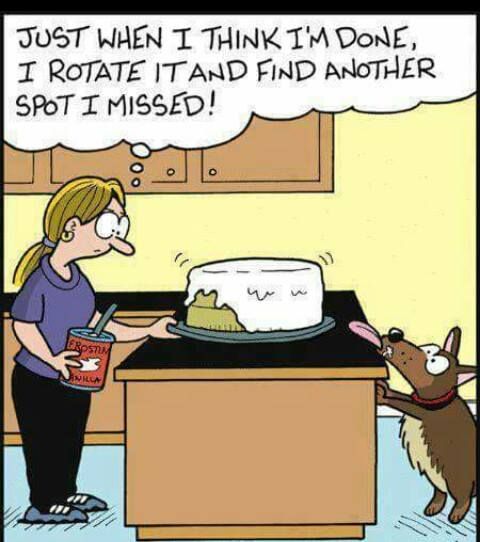 On vacation in Hawaii, my step- mom, Sandy, called a café to make reservations for 7 p.m. Checking her book, the cheery young hostess said, "I’m sorry, all we have is 6:45. Would you like that?"

"Okay," the woman confirmed. Then she added, "Just be advised you may have to wait 15 minutes for your table."

Driving back from Vermont, I stopped at a vegetable stand. It was deserted except for a sleeping German shepherd. I stepped over the dog, helped myself to some corn, then opened the cashbox to pay. Taped to the inside of the lid was this note: "The dog can count." 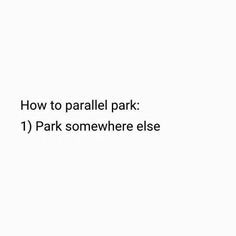 A zookeeper is ordering new  animals. As he fills out the forms, he types “two mongeese.” That doesn’t look right, so he tries “two mongoose,” then “two mongooses.” Giving up, he types, “One mongoose, and while you’re at it, send another one.”

I took my Dad to the mall the other day to buy some new shoes (he is 72). We decided to grab a bite at the food court. I noticed he was watching a young man sitting next to him. The man had spiked hair in all different colors: green, red, orange and blue. My dad kept staring at him. The young man would look and find him staring every time. When the young man had enough, he sarcastiaclly asked, "What's the matter old man, never done anything wild in your life?" Knowing my Dad, I quickly swallowed my food so that I would not choke on his response, knowing he would have a good one, and in classic style he did not bat an eye in his response.

"Got drunk onece and had sex with a peacock. I was just wondering if you were my my son."

Gary was having a yard sale.  A minister bought a lawn mower  but returned it a few days later,  complaining that it wouldn’t run.

The minister was shocked. “I have not uttered a curse in 30 years.”

“Just keep pulling on the starter rope—the words will come back to you.”

The clerk looks over the paper for a minute before telling the dog, “You know, there are only nine words here. You could add another ‘Woof’ for the same price.”

The Dachshund shakes his head at the clerk in disbelief. “But that would make no sense at all.”

When asked for his name by the coffee shop clerk, my brother-in-law answered, “Marc, with a C.” Minutes later, he was handed his coffee with his name written on the side:Cark.

For her 40th birthday, my wife said, "I'd love to be 10 again." So that Saturday, we had a heaping stack of chocolate-chip pancakes, her favorite childhood breakfast. Then we hit the playround for the merry-go-round. We finished the day off with a banana split.

"So how did you enjoy being a kid for day."

"Great," she said. "But when I wanted to be ten again, I meant dress size."

“Poor Old fool,” thought the well-dressed gentleman as he watched an old man fish in a puddle outside a pub. So he invited the old man inside for a drink. As they sipped their whiskeys, the gentleman thought he’d humor the old man and asked, “So how many have you caught today?”

A new supermarket opened near my house. It has an automatic water mister to keep the produce fresh. Just before it goes on, you hear the sounds of distant thunder and the smell of fresh rain.

It's a blonde joke - I'm blonde and thought it was funny (no offense to anyone).

"Last year I replaced all the windows in my house with those expensive, double pane, energy-efficient kind. Today, I got a call from Home Depot, who installed them. The manager complained that the work had been completed a year ago and I still hadn't paid for them. HHHHEEELLLLOOO...just b/cI'm blonde doesn't mean that I'm automatically stupid. So, I told him just what his fast-talking sales guy told me last year....that these windows would pay for themselves in a year. Helllooo, it's been a year, so they're paid for, I told him. There was only silence at the other end of the link, so I finally hung up. He never called back. I bet he felt like an idiot!"

AARPJen
Caregiving Concierge
2 Kudos
9,461 Views
0
Share
Report
Reply
Turn on suggestions
Auto-suggest helps you quickly narrow down your search results by suggesting possible matches as you type.
Showing results for
Show  only  | Search instead for
Did you mean:
Users
Need to Know