What I am Reading

I first saw Aerosmith open for Black Sabbath at Madison Square Garden in 1975, and ended up working with the band in 1979-80.  They were down and almost out, so it was a wild ride to say the least, and just one of many tales told in this "fanoir" of the golden days of classic rock by a huge fan who's dream comes true but learns that its more about sweat than it is about glamour.

I started writing it all down in my late 50s, more than 30 years after I left the business, but the memories held up, internet research was an adventure in itself and it all resulted in BABYSITTING A BAND ON THE ROCKS (available at Newbury Comics locations throughout the Northeast and online at LTCDS.com > Webstore > Books). BABYSITTING A BAND ON THE ROCKS also includes adventures with AC/DC, Pink Floyd, Van Halen, Jethro Tull, Billy Joel, Keith Richards and more..I was involved with almost 200 rock shows between 1976 and 1982, working with dozens of different bands and artists.  Discovered some never-before-seen photos which are now in the book, including a few with me in the middle of the action.  Self-published and I don't expect it to ever make me rich, but it was a blast to write and to get my story out to hundreds and maybe thousands of people.  Google it if you want to read reviews. 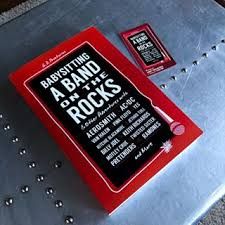 I just started "All the President's Men by carl Bernstein

What I am Reading

I just started "All the President's Men by carl Bernstein