To me it seems as though it is going at a faster pace than previous seasons, especially the results show last night. Boom, boom, and no long drawn out announcements of those who had been saved by America until the last one...the wildcard. I like how they did that, too. After the coach saved the third member of his/her team, of the two remaining, the one with the highest vote got to compete with the remaining one on the other teams and there was one wildcard voted for with instant vote. So three teams have 3 artists, and one team has four. Thirteen artists will perform next week.

I'm in the same dilemma as usual. I like too many of them and up until last night I hadn't lost many of my likes. Last night I did lose Kyndal from Team Gwen, Ricky Braddy from Team Blake, and Khalea from Team Legend.

Anyone watching the live shows?

I watched the Monday show this afternoon, so didn't get to vote. I thought that all of the performances were very good. My favorite team is Team Gwen. They were all terrific, but the two standouts for me were Rose and Jake.

From Team Blake, I liked Gracee and Ricky (Braddy).

From Team Kelly, it was Max and Jake (both were outstanding).

From Team Legend, it was Marybeth and Katie. Katie was so much better this week. First, she had a good song for her voice, she had the emotional connection it needed, and she showed that she could sing softer tones as well as the big ones.

No bets though on who gets voted through. I have no idea where that barometer is!

I finally got caught up watching the shows. Yes, it's good that they are back to the regular knock-outs. We still have the "no-shows" though. I don't have any favorites, but I think they have some very good competitors. Have y'all noticed that there are more 'older' competitors this year, and not just young teens? Unfortunately, two were eliminated this week (Marina and Jessie).

I really enjoyed Cali with the Chris Isaak song, Wicked Game. Marina was superb on the Tom Jones' classic, I Who Have Nothing. That was a tough call, but I think I would have gone with Cali, also. It's a shame that no one stole Marina.

The battle between Joanna and Ricky was also a tough call. Was glad that Gwen stole Joanna when Blake went with Ricky. (Did they have that planned?)

As for Katie vs Max, I agreed with Kelly, and preferred Max. He showed range, control, dynamics, and made an emotional connection with the song. Very nicely done.

Katie is a power vocalist, but beyond that, there isn't much to say, IMO. Range, yes. Dynamics, no. With no emotional connection to the song, just belting it out doesn't get the job done. Blake said she was getting angrier (louder?) as she went along, but that isn't what the song is about. Go back and listen to the Janis Joplin version and you'll see what I mean. She makes a blues connection, and you feel the pain in her soulful screams as she tries to convince herself that she can take it. She's hanging on with everything she's got. I didn't get that from Katie.

@GailL1 ...Both Katie and Max were on my "like" list from the get go so I was glad they both got to stay. Also glad that Kelly was able to steal Max since she had turned for him in the Blinds, but was blocked.

Katie is an entity in her own hemisphere. LOL!  Pretty sure she won't win, but she sure is entertaining and has a powerful voice.

I'm also liking Jake Hoot now that I've heard him a few times. At first he wasn't even on my radar.

Soooooo glad they went back to the normal Knockouts and not those stupid Cross-battles.

OK, What does everybody think of Katie Kadan? 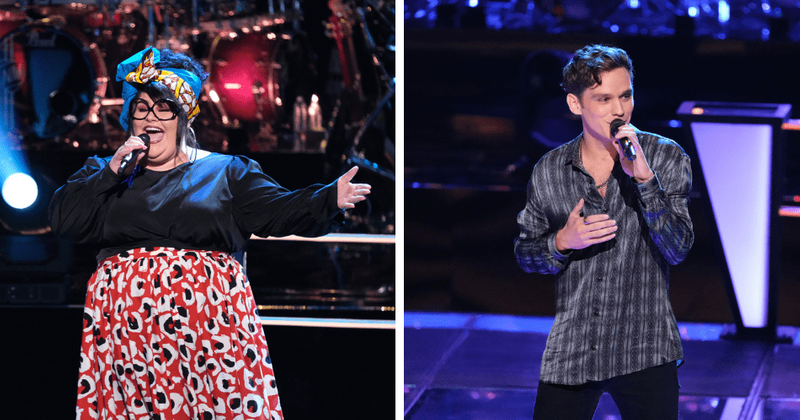 They both stayed on the show - John kept Katie and Max was saved by Kelly ( a two chair save - Kelly and Gwen).

I enjoyed both of them but in different ways.

@ASTRAEA , @MaVolta ...I've been posting mostly on Our Front Porch, Morning Roll Call. The folks there are so nice, down to Earth, and helpful with all kinds of stuff. No one is ever nasty. Most topics are just friendly chats about the weather and what people are doing in their daily lives. It's a comfortable group where you can just be yourself.

I haven't posted here in a while, but will continue for as long as I watch this season of The Voice. N.

This is off-topic, but "TV Talk" is the only group in which I post semi-regularly. Do you check out new material in other groups, and post there too? I hardly ever do, and when I did post recently, a 3rd person accused me of shaming the other poster, and then attacked me! It certainly doesn't motivate me to check out other group discussions on AARP!!

Occasionally, I will post to other topics. I don't really go looking for them, it's just if I happen to see something interesting being discussed. I've also tried to cut back on time spent here.

This is off-topic, but "TV Talk" is the only group in which I post semi-regularly. Do you check out new material in other groups, and post there too? I hardly ever do, and when I did post recently, a 3rd person accused me of shaming the other poster, and then attacked me! It certainly doesn't motivate me to check out other group discussions on AARP!!

I've never watched (or heard of) Masked Singer. Googled it, but doubt I'd care for it.

There were two or three more singers that I liked this week. No special favorites yet. Each coach has one spot left, so Monday will be the end of the blinds.

@ASTRAEA ...Having trouble again replying on my computer,  so am on my phone. I did watch Masked Singer once last season,  but couldn't get into it. I didn't like the waiting to see who was under the costume.

My friend loves that show and thourogly enjoys it.

Report Inappropriate Content
1
Kudos
885
Views
Reply
1 Kudo
Turn on suggestions
Auto-suggest helps you quickly narrow down your search results by suggesting possible matches as you type.
Showing results for
Search instead for
Did you mean:
Users
Top Authors
View all