Tired of incessant telemarketing calls? You aren’t alone. Complaints to the Federal Trade Commission average 190,000 a month. If you’ve added all of your phone numbers to the National Do Not Call Registry, you might be wondering why you still get so many telemarketing calls. One reason is that some entities are allowed to call — charities, surveys, political groups and debt collectors, for example. But another reason is that many of these calls, up to half, may be scam calls. And we all know scammers don’t first check the National Do Not Call Registry before targeting us. Nevertheless, there are some things you can do to help keep these calls at bay.

What you should know

Sharing another resource that may be of interest. It explains why robocalls are at an all time high, and discusses what the FTC is doing about it. fine. Additionally, sharing a recent AARP article about how to stop Robocalls.

Wow, @RolandH72755, that's such a savvy approach to combating unwanted calls. Good for you!

@RolandH72755 Thank you for sharing this tip for other community members. Since we know scammers are not following the rules of the DNC list we have to be our own advocate. My best advice is don't pick up the phone unless you absolutely know who is calling, and put your contacts in your phone so you can identify them, similar to your solution. We all need to share our best practices so we can fight these scammers together, so I appreciate you posting this. Thank you, AMY

Here's a link to an article for those unfortunate enough to own an idiot phone . . . errr I mean iPhone.

Aparently if you turn on Do Not Disturb it will only allow calls from your contact list to get through.

According to this article

some Samsung phones have the same ability to block all calls which aren't in your contact list.

The Do Not Call List is a joke. Really just a place for scammers to get legitimate phone numbers to call offering scams.

The absolute best thing I ever did was buy this Sonim XP Bolt stick phone on eBay. Cost around $50 and accepts the AT&T SIM that Consumer Cellular will sell you. Too bad it is only 3G and might quick working next year. I don't text or surf the Web or any other thing on my phone. It's a phone meant for calls only.

At any rate, I was constantly annoyed by phone scams. My number has been on the DNCL for years and was even renewed. Nothing stopped "Weeendoze Company" from calling about "a virus they discovered on my computer" or the "IRS" calling or any of the other hundred plus phone scams out there.

At any rate, I hope this picture is clear enough. 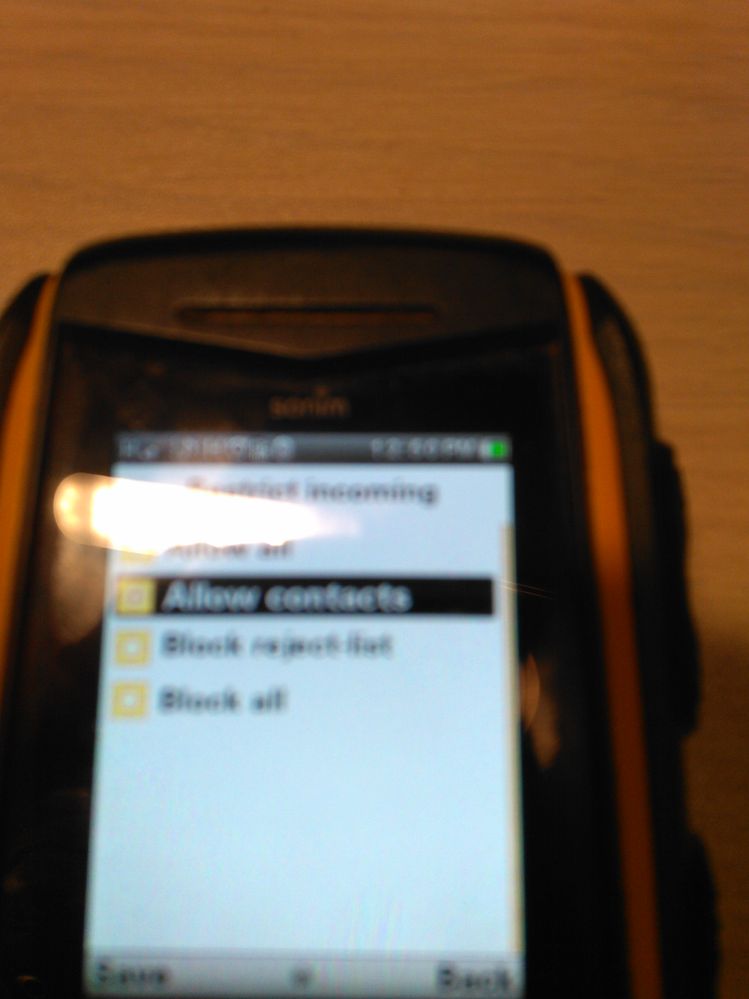 When I set the phone to "Allow Contacts" all other incoming calls are routed directly to voice mail without the phone even ringing. It does light up but no vibrate or ring.

So far the only annoying part is the BT45-TOY I had installed in my 2006 Toyota Avalon for handsfree Bluetooth calls. It appears the "light up" portion also initiates Bluetooth connection to that device. Wouldn't be a big deal ordinarily, but it switches the radio to satellite mode so it can communicate with the phone and doesn't autoswtich back.

After almost a month of enabling this setting, I have peace and quiet. I see a handful of missed calls and none of them bother to leave a message. It's Nurvana.

0 Kudos
4,058 Views
0
Share
Report
Reply
Turn on suggestions
Auto-suggest helps you quickly narrow down your search results by suggesting possible matches as you type.
Showing results for
Show  only  | Search instead for
Did you mean:
Users
Need to Know