we must unite as Americans.

Or they could ask you if they wanted a left wing biased answer.

And still, after 6 years, you STILL can't identify any left-wing position I've taken.  So it remains clear where the bias is; thanks again for confirming it again.

That's exactly what they have in many countries (ie Costa Rica, India) with very good care. What's your plan - have the government run everything?

This is what I found on the Costa Rican and Indian health care system. Looks like both of them are state run with the Indian system being run by the individual "states" in India and the Costa Rican system by the central government. Costa Rica is slightly outperforming the US but at drastically reduced costs while India sucks on both counts.

I don't think that is what you had in mind. You are correct, I want to see a single payer system with minimum required services mandated.  Can you describe the system you would like to see and not just what you don't want?

Costa Rica has its own social health care system called Caja Costarricense de Seguro Social (CCSS), commonly referred to as the “Caja”. This universal health care system will cover Costa Rican citizens, permanent residents, and visitors for a small monthly fee based on a percentage of your income.Mortality in the United States is 18% higher than in Costa Rica among adult men and 10% higher  among middle-aged women, despite the several times higher income and health expenditures of the United States.

The health care system in India is universal. That being said, there is great discrepancy in the quality and coverage of medical treatment in India. Healthcare between states and rural and urban areas can be vastly different. With the perspective of outcomes, in India the life expectancy at birth is 63 years for men and 66 years for women, while that for US is 76 years for men and 81 years for women. Children under the age of five are also a lot more likely to die in India than in the US.

If you REREAD my prior posts again, you will see that is exactly what I mean. In the U.S. 60 years ago we had both private and county hospitals (similar to Costa Rica) of course back then, we didn't have all the lawyers, regulations, insurance companies, and procedure codes to record. You will notice that back then, as in Costa Rica and India, they have both a public system run by government and a private one.

You advocate "single payer" which gets me back to "look at how the VA works" now!

On average across the United States, only 18.7% of taxpayers directly own stocks. Now, these numbers only include stock portfolios, not the roughly half of Americans who participate in the market through an employer-sponsored retirement plan, according to a Pew analysis of Census Bureau data published earlier this year.

54% of Americans invest in the market, either through individual stocks, mutual funds, pensions or retirement plans like a 401(k), according to Gallup. That's down 11% since the Great Recession.

You say these people are "rich" - some of them are but there are others too but I guess that might be determined by what your definition of "rich" might be.

What about somebody that saved and invested in a lot of different areas during their working career so that their retirement could be a complete package.

I was self employed so there was no employer match for anything - it was up to me.  So don't give me the crap of no access or even no money to do it - I sometimes invested $ 30 a month, but month after month.  Then building it up as our (husband and wife both self-employed) income increased.

So let's see who invest in the market - 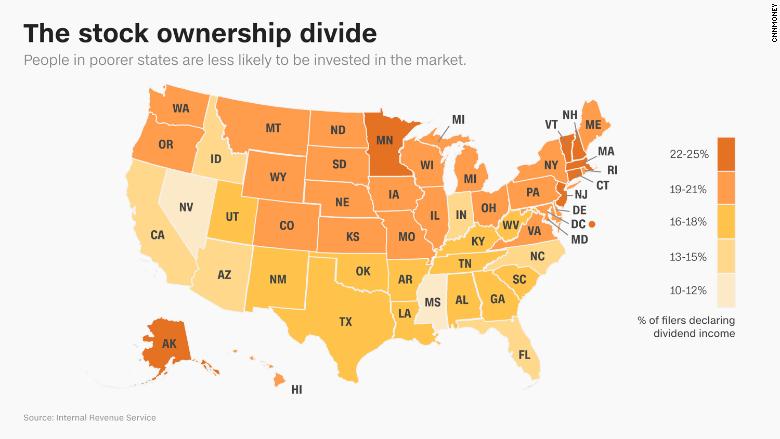 But there are some gains for those who do not invest -

Rising stocks can be a sign of a healthy economy, which is certainly the case with the current bull run, which CNN says started in 2009 under President Obama and is the second-largest in history.

There is lots to cheer in that department: The U.S. economy is at full employment. People are getting paid more. Consumer confidence is high.  Even if you're not invested in stocks, you could be benefiting from the same forces that are sending stocks soaring.

Have you heard the Retailers cheering after a nice Christmas sales season - but maybe those spending all the money are "rich" people too?  Again, depends on your definition of "rich".

Or they could ask you if they wanted a left wing biased answer.

Gail,  thanks for your informative posts and links; truly an asset to good discussion, though maybe a little lost under the current headline.  But again, thank you.  I hope others take the time to review and understand them.

Not certain it would work, but I am certain allowing nazis, KKK and White Supremacists like those anchoring Fox programs to lie without any restrictions is destroying America.

Now newspeople you disagree with are nazis, Kluxers, and White Supremacists.

Further and further out there on the radical fringe.

Call them "Foc" if you want but I was specifically referring to "any" news source that disagrees with the radical left wing agenda.

Hey, Investors' Business Daily has been attacked here for publishing something other than "Trump sucks".

Investor's Business Daily wrote that the internationally renowned scientist Steven Hawking "wouldn't have a chance in the UK, where the (British) National Health Service (NHS) would say that the life of this brilliant man, because of his handicaps is essentially worthless"

Steven Hawking has always lived in the United Kingdom.

Hawking said, "I wouldn't be here today if it were not for the NHS. I have received a large amount of high-quality treatment without which I would not have survived."

Quite obviously, Investor's Business Daily has an extreme conservative bias that makes most of it's conclusions irrational and untrustworthy...

IBD is "ok" for number crunching and market reporting, but otherwise is only suitable - as the British put it - for use as bum fodder(toilet paper - for the marginally literate conservatives/republicans who are reading this)...

Have they figured out where Steven Hawking lives yet?  On the media bias scale, IBD is rated "right to Far-Right.  It is a hoot one poster here pushed an opinion piece from IBD as a legitimate piece of news.

This has usually been said by those who would not support the previous President at all and now expect everyone to support the current President since they support him.

I saw this post which I considered to be foolish:

Once the elections are over, we must unite as Americans.

Does the poster think that before the elections are over we should not unite as Americans?

What does the poster thinks the phrase  "unite as Americans means"?

It is a mystery to me.

Making "I am an American" more important than "I am a Republican" or "I am a Democrat" - It always has been...problem is, quite a few like you lost site.  You need no reason "to start".

As a loyal American who believes in Democracy, the free enterprise system, and open government, I would love to unite with those who believe in different policy approaches.  Health care, gun control, helping the poor, education are some of the things I would love to see as common goals.

I keep asking "what is your vision for xxxxx" and I hear crickets. Actually, what I hear is "Just don't have a program where the gob'ment has control". OK, then what is your alternative.  I would point to programs successfully running in many other countries as examples but conservatives can't seem to articulate how to replace systems we all agree are broken. How do you come together with someone who has no idea what they want?

@Richva - Well said. It's a perfect example of why conservatives don't have, and cannot develop a replacement for Obamacare. Their answer to everything is - just cut taxes and everything will fix itself. Yeah, we found out how that worked in the 80's, didn't we?

Report Inappropriate Content
3
Kudos
263
Views
Reply
3 Kudos
Turn on suggestions
Auto-suggest helps you quickly narrow down your search results by suggesting possible matches as you type.
Showing results for
Search instead for
Did you mean:
Users
Announcements