tRump Should Try READING the Bible Instead of His Obscenity

tRump Should Try READING the Bible Instead of His Obscenity

Trump’s use of the Bible was obscene. He should try reading the words inside it.

On Monday evening, federal authorities used tear gas to clear Lafayette Square so President Trump could pose for a photo while holding a Bible in front of St. John’s Episcopal Church. It wasn’t the first time Trump has used the word of God as a political prop. But it was obscene, even for him.

Though Trump answered ambiguously when asked if the volume he was holding was his Bible, it appeared to be the Revised Standard Version of the text that he has used to signal to his Christian nationalist followers before.

According to David Brody and Scott Lamb’s unironic “spiritual biography,” “The Faith of Donald Trump,” the Revised Standard Version was a gift from Trump’s mother, Mary Anne, on the occasion of his graduation from Sunday Church Primary School at the First Presbyterian Church in Jamaica, Queens. Since his 2016 campaign, Trump has publicly claimed that the Bible is “very special” to him, using it frequently to authenticate his faith among what he calls “the evangelicals.” When he took the oath of office at his inauguration, Trump placed that Bible on top of the Abraham Lincoln Bible from the Library of Congress.

Though Trump has said little more about this Bible publicly, charismatic television preachers such as his faith adviser, Paula White-Cain, have developed a mythos around it. According to the version of the story these preachers often recite in sermons, this Bible was sent to Trump’s mother by two aunts in Scotland who were instrumental prayer warriors in an early-20th-century revival there. Among so-called Christian nationalists who believe that America has strayed from its traditional values and must be redeemed by “Christian” leadership, this Bible has become a sort of talisman to convey spiritual authority to an unlikely “chosen one.”

Whether Trump believes any of this, millions of Christian nationalists do. For them, a picture of Trump with what appears to be his great aunts’ Bible in front of a beleaguered church is worth a thousand words of reassurance.

The White House video of Trump's visit to St. John's Episcopal Church in D.C. erases the violent attack on protesters by authorities that preceded it and is nothing but propaganda.

But for those of us who study and preach the Bible’s text, that Christian nationalism is an offense. The presiding bishop of the Episcopal Church, Michael Curry, tweeted on Monday evening that the president had “used a church building and the Holy Bible for partisan political purposes.” While that is true, we find it even more outrageous that Trump and the religious extremists he appeals to have turned Christian faith against itself.

As preachers in the South, one black and one white, we are painfully aware of the ways Christian faith has been used to justify slavery, white supremacy, legal segregation, corporate exploitation, the dominance of women and the dehumanization of LGBTQ people. As Frederick Douglass put it,

Millions of Christians and other people of faith see and acknowledge this difference.

We read the prophet Isaiah’s cry, “Woe unto those who legislate evil … make women and children their prey,” and we know it is a challenge to this administration and any political leadership that neglects its responsibility to care for the poor and most vulnerable in our society.

We read the prophet Jeremiah crying out against those who say, “‘Peace, peace’ when there is no peace.” We hear it as a call to listen to the grief of Americans who are not only weary of racialized police violence but also of a pandemic that has fallen disproportionately on black, brown and poor communities who are often asked to do what the essential work of food preparation, sanitation and bodily care.

We read Jesus saying, “Woe unto you … hypocrites … you have neglected the weightier matters of the law,” and we know that, at the very heart of our faith, we are called to challenge those who try to twist belief to use it for their own ends.

The Bible as a talisman has real political power. But we believe the words inside the book are more powerful. If we unite across lines of race, creed and culture to stand together on the moral vision of love, justice and truth that was proclaimed by Jesus and the prophets, we have the capacity to reclaim the heart of this democracy and work together for a more perfect union.

To do that, we need to read the Bible and live it, not wave it for the cameras.

Trump’s use of the Bible was obscene. He should try reading the words inside it. 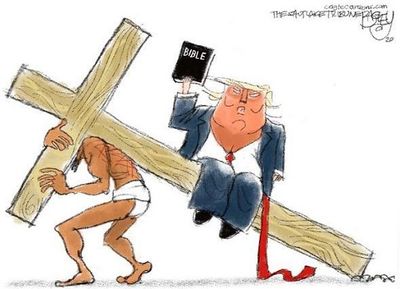 ToadPOTUS tRump TRIED to read the Bible ONCE - he began "Two Corinthians ... " as if it was the beginning of an old joke (as in "Two Corinthians walk into a bar") Pretty sure his Worshipers told him to not go there again.

There's really no "upside" for Toad to read the Bible, his cryptoXian Worshipers only use their biblical knowledge to justify domination of women and children and the vilest forms of racism insisting "The Mark Of Cain" was non-white skin. The fact they have elevated Toad to absurd heights, calling him "the New Cyrus" after the Persian King who let the Jews go back to Jerusalem, is proof positive these people have no interest in Our Savior or His Words.

Only way to end systemic Racism is to remove from power the political party that has made racism a bulwark of their dogma for the past 52 year - NO MORE GOPers IN OFFICE!

Tom5678
Honored Social Butterfly
agree! Its called practice what you preach sir!
1 Kudo
154 Views
0
Share
Report
Reply
Turn on suggestions
Auto-suggest helps you quickly narrow down your search results by suggesting possible matches as you type.
Showing results for
Show  only  | Search instead for
Did you mean:
Users
Announcements