Trump does not make policy announcements.  He floats ideas for scripts. He floated this idea two weeks ago. His problem is that the media is starting to document anything he says that can be measured. It is not looking pretty.

He has been threatening to replace Obamacare since before he was appointed president. Unfortunately, he can't stay focused for longer than the average Fox and Friends episode so all his grand promises are just that, promises.

Leaders do not make promises until they are already in position to deliver.  Leaders do not "joke" or "Kid" unless they make it VERY clear that is what they are doing. Finally, leaders deliver.

Now, with the two weeks expiring Sunday, there is no evidence that the administration has designed a replacement for the 2010 health-care law. Instead, there is a sense of familiarity.

Repeatedly and starting before he took office, Trump has vowed that he is on the cusp of delivering a full-fledged plan to reshape the health-care system along conservative lines and replace the central domestic achievement of Barack Obama’s presidency.

Well, maybe a little bit later as Trump's idea of "full coverage for all" needs some work...... 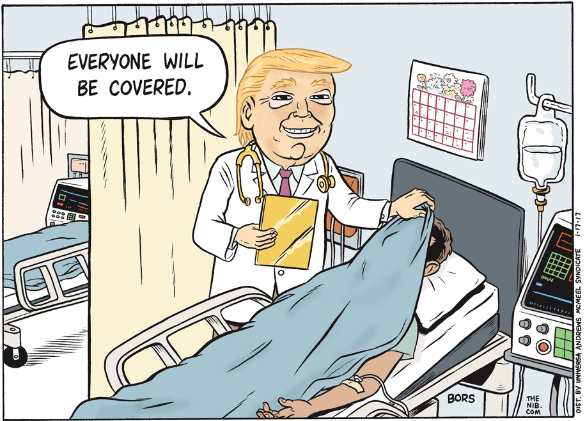 You know how he said he would be signing a full and complete health care bill in two weeks..........two weeks ago?  Well, he was just joking.........again.  That whacky Tiny Hands, eh?  (Or, is this another case of whatever Trump touches, fails?)

Trump promised to replace Obamacare with "something better".

Trump promised to replace Obamacare with "something better".

Low cost, no coverage, high deductible...what could be better!?

Sure that the trump cult will love it, even though they will be the first to suffer from it...and how is that virus going for them?

2 Kudos
289 Views
0
Share
Report
Reply
Turn on suggestions
Auto-suggest helps you quickly narrow down your search results by suggesting possible matches as you type.
Showing results for
Show  only  | Search instead for
Did you mean:
Users
Announcements