"Code of Silence" on Trial After Murder by Chicago Cop

Re: "Code of Silence" on Trial After Murder by Chicago Cop

How typical - start a topic attacking the actions of police AND go racial in the intro (WHITE police officer - BLACK victim).

Ohhh Lord, more facts were revealed by the author of the article.  Shame on them!!!!  As if identifying the race of the perpetrators is "racial"....

Re: "Code of Silence" on Trial After Murder by Chicago Cop

How typical - start a topic attacking the actions of police AND go racial in the intro (WHITE police officer - BLACK victim).

Re: Police ‘Code of Silence on Trial After Murder by Chicago

There should be no room in our police forces for a "Code of Silence" and the mentality that allows it to exist needs to be shattered. All Americans should be in agreement with that.  Unfortunately there are those that would call anyone "cop haters" who point out those things. That is what helps police forces to 'keep it alive' within their ranks  It's disgusting, immoral, and should be unacceptable..

"Code of Silence" on Trial After Murder by Chicago Cop

Three Chicago police officers — from left, David March, Thomas Gaffney and Joseph Walsh — are accused of covering up what had really happened when a white police officer shot Laquan McDonald, a black teenager. 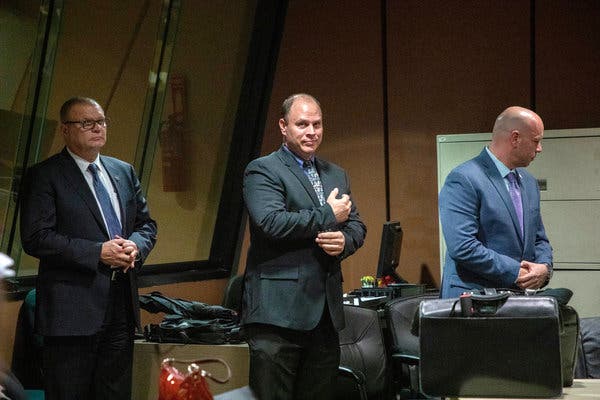 CHICAGO — Inside a cramped and worn courtroom, three white police officers are on trial in connection with the fatal shooting of a black teenager, Laquan McDonald. But these officers never fired their guns. Their crime, prosecutors say, was concocting a story to cover up for a colleague who did.

As prosecutors tell it, Chicago police officers shooed away eyewitnesses after the shooting on Oct. 20, 2014, and then made up a narrative to justify the shooting. They said in official reports that the teenager had tried to stab three officers, and that he had tried to get up from the ground as 16 shots were being fired into him.

The only hitch? Dashcam video footage of the encounter contradicted their account.

Patricia Brown Holmes, a special prosecutor trying the three officers on charges of conspiracy, official misconduct and obstruction of justice, told a judge last week: “Instead of serving and protecting all citizens of Chicago, the defendants tried to protect only one — Jason Van Dyke,” the police officer who was convicted this fall of second-degree murder in the shooting.

On trial along with the officers is the “code of silence” that police officers across the country have been accused of operating under. In Chicago, the issue has been around for decades, bubbling up in recent years in cases involving a drunk-driving officer, an off-duty officer’s beating of a bartender and a lawsuit by two police officers who said they faced retaliation after breaking the code.

“Every police officer has seen the code of silence in action,” said Lorenzo Davis, a former Chicago officer who rose through the ranks to commander over a career of more than two decades. He was later an investigator for an oversight agency of the police department, and was awarded $2.8 million by a jury this year after suing the city, saying he had been fired from the agency because he refused to change his findings concerning police shootings that he deemed unjustified.

By Mr. Davis’s description, the code of silence can be subtle. An officer, even one who was close by, may say that he didn’t see what happened at a crucial moment. And the penalties can be frightening: colleagues may not arrive as quickly to help an officer in danger who is considered a snitch.

“The code of silence works a lot like a family situation,” Mr. Davis said. “You cannot tell on your family members. You just know that. No one has to tell you that. If you have a partner, you’re going to back up your partner.”

I'm pleased there are prosecutors, police chiefs and posters here who insist cops be held accountable for the actions.  Some, apparently would NEVER do so....the "shrug" is far easier....


"FAKE 45 #illegitimate" read a sign at the Woman's March in DC, 1/27/2017
Report Inappropriate Content
0
Kudos
234
Views
3
Replies
Reply
0 Kudos
Turn on suggestions
Auto-suggest helps you quickly narrow down your search results by suggesting possible matches as you type.
Showing results for
Search instead for
Did you mean:
Users
Top Authors
View all