Okay, she’s bad. But hopefully she won’t be that bad.

Such is the damningly faint praise Senate Republicans have offered President Trump’s latest unfit nominee for the Federal Reserve Board, Judy Shelton, ahead of her confirmation hearing Thursday.

To be clear: As these senators are aware, there are many reasons why this goldbug and Trump economic adviser would, in fact, be that bad. First and foremost is that she threatens the Fed’s political independence, which is necessary for the central bank to function effectively.

How can you tell she would politicize the Fed? Because, like earlier (failed) Trump Fed picks, Shelton has ditched lots of supposedly deeply held beliefs to pander to the president.

During the financial crisis (and, coincidentally, while a Democrat was president), Shelton rebuked the Fed for ultra-low interest rates, claiming that loose money would stoke “ruinous inflation.” But today, although the economy is stronger, she advocates slashing rates “as expeditiously as possible.”

Pre-Trump, Shelton said that the Fed should stop “appeasing financial markets”; today, she says the central bank should prop them up after all. And so on.

It’s also clear that Shelton wants to politicize the Fed, because she explicitly said she wants to. In an op-ed last fall, she argued that the Fed should “pursue a more coordinated relationship” with the White House.

Just as troubling as her many opportunistic policy reversals, though, are the ideas Shelton still hasn’t reversed herself on. Especially: her desire to bring back the gold standard.

While popular among the right-wing fringe, the gold standard has been resoundingly rejected by economists and was abandoned worldwide. For good reasons.

No matter. By letting the Fed rather than the quantity of gold determine the money supply, Shelton claims, Congress has created an institution no different from the “Soviet State Planning Committee.” At times, she has even appeared to suggest the Fed should be eliminated.

In short, Shelton is an opportunist and a quack. Senate Republicans seem to know this — but they still may be too craven to oppose her nomination, for fear of crossing Trump.

When asked last summer about Shelton’s views on gold, Sen. Tim Scott (R-S.C.) ducked the question: “I don’t think it’s relevant,” he told Politico. There was no need to focus on “controversial statements,” he said, when “she has decades of work that we can actually look at.” But those “decades of work” mostly comprise . . . exhaustive treatises fawning over the gold standard.

Last week, Sen. Thom Tillis (R-N.C.) told my Post colleagues that Shelton’s support for the gold standard doesn’t matter because the United States isn’t likely to return to it anytime soon. Likewise, Sen. Kevin Cramer (R-N.D.) has said that Shelton is wrong on gold but that he supports her nomination anyway.

“I kind of like having somebody that challenges status quo like Judy on it,” Cramer said. Then he added, “I wouldn’t want five members like her.”

The subtext: Shelton may want to blow up the economy, but it’s not like she could do it on her own. Right?

That should not be the bar for candidates to join the world’s most powerful economic institution.

And, until recently, it hasn’t been. Most of Trump’s Fed picks — including the other nominee the Senate Banking Committee hears on Thursday — have been qualified, competent candidates.

More to the point, even without the power to unilaterally reinstitute the gold standard, Shelton could still wreak a lot of damage.

She has made clear that she would tattle to (sorry, “coordinate with”) the president about Fed meetings. This would make candid discussion — and, therefore, independent policymaking — impossible.

What’s more, she would almost certainly be viewed as a Fed chair-in-waiting if Trump gets reelected. Trump won’t reappoint Jerome Powell, whom the president regards as an “enemy”;

Shelton’s confirmation to the Fed would place her on a glidepath to replace him.

Nine years ago, Senate Republicans blocked a Fed Board candidate nominated by President Barack Obama on the grounds that the candidate was supposedly unqualified — despite the fact that that nominee, Peter Diamond, had a Nobel Prize in economics. Surely these same lawmakers can be at least 1/100th as picky today.

The global economy depends on it.

Let's watch as the GOP Senators line up to kiss the Dictator's butt again to manipulate the economy to make the numbers look good for the Fuhrer..... 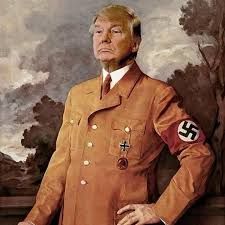 "FAKE 45 #illegitimate" read a sign at the Woman's March in DC, 1/27/2017
2 Kudos
95 Views
0
Share
Report
Reply
Turn on suggestions
Auto-suggest helps you quickly narrow down your search results by suggesting possible matches as you type.
Showing results for
Show  only  | Search instead for
Did you mean:
Users
Announcements