Will Donald Trump be Ousted in a Coup or Just Impeached?

He doesn't talk over them because he doesn't have the vocabulary-

-that makes them feel smart.

He promises them everything they have told him they want

-that makes them feel safe

this allows them to dream

He is riddled with loathing and distrust with regard to those of color or of a different culture, due to his incredible ignorance with regard to diversity

He lies to them and because of the above

No coup required. the Constitution provides for the accidental election of an imbicilic POS like Der Trumper - a majority of the Cabnet can notify the Speaker of the House and the President Pro Tem of the Senate the President is no longer able to discharge the duties of his office, and he's gone, Pence becomes President.

Best solution is to deprive the twit of his majorities in House and Senate starting 1 Jan 2019. 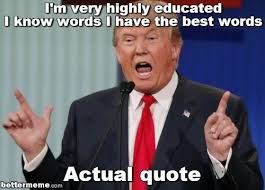 Spoken with the vocabulary of a toddler!!!

Trump needs to watch the educational kid shows on PBS instead of killing PBS.  He could elevate his vocabulary to that of a 5 year old!

Der Trumper stopped maturing intellectually and socially around age 5 because that's all that was ever required of him. His base love his speeches because he thinks just like them, talks just like them and hates just like them. Will it ever occur to the GOPer base that electing people dumber than they are is not the way to go? SAD

Cent--Cute post, but let's be honest, trump will be lying right up until the very second he dies, he knows no other way.

Chasky-- certainly if those who have voted for Obama had gotten up and left the country, the United States would be a much better place right now. No ridiculous Trump in office, no lies, no felonies, no collusion with Russia, no obstruction of justice,  no misuse of taxpayer funds, no sexual predator, and all of the people who support him such as the white supremacists, the white nationalists,  and others who hate people for absolutely no reason would be gone too. What awonderful country this would be had that  happened.

pc - I think you might want to proof this comment since I don't think if follows the rest of your posts. 😏

impeachment. Don't forget to call your Senators and tell them you want impeachment or removal under amendment 25, article 4.

And your evidence for justification would be?????

- Violation of the emoluments clause of the Constitution by taking the oath of office while refusing to divest himself of his foreign investments!!!!!

- And now .... obstruction of a government investigation!!!!!

Get over it and move on...  President Trump WON the election fair and square.

An election won with foreign interference is an unconstitutional election jimc91 ..... hardly anything "fair and square" as you'd like to believe!

Spoken with the vocabulary of a toddler!!!

Trump needs to watch the educational kid shows on PBS instead of killing PBS.  He could elevate his vocabulary to that of a 5 year old!

Chasky-- certainly if those who have voted for Obama had gotten up and left the country, the United States would be a much better place right now.

Are you saying that you didn't support Obama?

Report Inappropriate Content
0
Kudos
908
Views
Reply
0 Kudos
Turn on suggestions
Auto-suggest helps you quickly narrow down your search results by suggesting possible matches as you type.
Showing results for
Show  only  | Search instead for
Did you mean:
Users
Announcements