In August of 2012, I wrote a column for The Post criticizing Donald Trump for his assertion of a connection between vaccinations and autism. In a testy letter replying to me, Trump denied that he opposed vaccinations per se.

“What I am saying,” he wrote, “is that vaccinations should be spread out over an extended period of time and not pumped into a tiny child with massive injections or inoculations that, after having been given, cause terrible changes to occur in these very young children. This is a well documented fact. If the vaccinations were spread out over time, as I said, I believe you would see a very substantial reduction in autism.”

Trump went on to cite the case of an employee who had her “perfectly healthy baby” vaccinated. Two weeks later, he recounted, “the baby’s health deteriorated significantly and now is autistic.” Calling this “very sad,” he insisted “there are many such cases reported. Obviously the drug companies and doctors don’t like to talk about it for financial and liability reasons.”

There is, of course, no documentation for a tie between vaccinations and autism. None. And pediatricians, needless to say, are not engaged in a coverup of routine medical negligence to avoid lawsuits. That is a conspiratorial fantasy.

But it is worth recalling that Trump’s version of populism has always included skepticism of medical consensus. He has a long history of trusting his gut on scientific matters on which he has little knowledge. And he has a strong tendency to believe that scientific elites engage in deception for personal motives.

All these inclinations are now emerging in the midst of a public health crisis. We have a president who is increasingly critical of advice from infectious disease experts, and who seems increasingly skeptical of the reported death total from covid-19. These tendencies are now finding resonance in right-wing media, which is in full revolt against epidemiology. Tucker Carlson questions whether Anthony S. Fauci, director of the National Institute of Allergy and Infectious Diseases, is “right about the science” and calls him a “buffoon.” Sean Hannity accuses Fauci of being in league with Democrats who want to keep the country locked down indefinitely to hurt Trump. Laura Ingraham complains of “rule by the expert class” that would leave America “poorer and less free.”

At one level, this is an unfair fight. Trump is a proven and perpetual liar, and his Fox News allies are artless, shameless ideologues. Fauci is one of the greatest humanitarian physicians of our time, whose entire career has been committed to scientific integrity and truth-telling. In a battle of credibility, the duplicitous, conspiratorial demagogues are at a serious disadvantage.

But the Fox News evening lineup not only shapes right-wing opinion; it reflects it. And it can’t be good that a substantial portion of the right has turned hard against science and expertise, as if knowledge and experience were somehow disqualifying. Many on the right seem prepared to extend the culture war to matters of public health, with health experts cast as “deep state” operatives sabotaging the president.

In that type of conflict, what does resistance look like? Well, we have seen semiautomatic weapons in the Michigan Capitol. We have seen some go defiantly maskless. Perhaps the next step will be proudly uncovered coughing. Or the patriotic licking of escalator handrails. Or the unwashed hand, raised in protest. Past a certain point, stupidity becomes lethal.

This is the strangest of populist causes. American populism of the Frank Capra variety is not only anti-elitist; it is directed toward helping the vulnerable, the little guy. But precipitous openings — without an adequate system of testing and contact tracing in place — will bring predictable suffering and death to the sick and elderly. Their welfare should be an objective of genuine populism. Try to imagine a Capra movie in which grandparents are sacrificed for the greater good. Mr. Potter would have to be the hero.

By demanding immediate opening and rejecting masks, conservatives are calling for the few to be sacrificed for the sake of the many. They are engaged in a revolt against both sanitation and sympathy. They are, in effect, creating a constituency for social Darwinism.

At some point, you’d think that conservatives would look around them and ask: Is this really what we’ve become? The need for such self-reflection has seldom been clearer. It does not prove your conservatism, your populism or your patriotism to needlessly endanger your neighbor.

Trump's "in-stinks" will lead to another Trump Tower ... 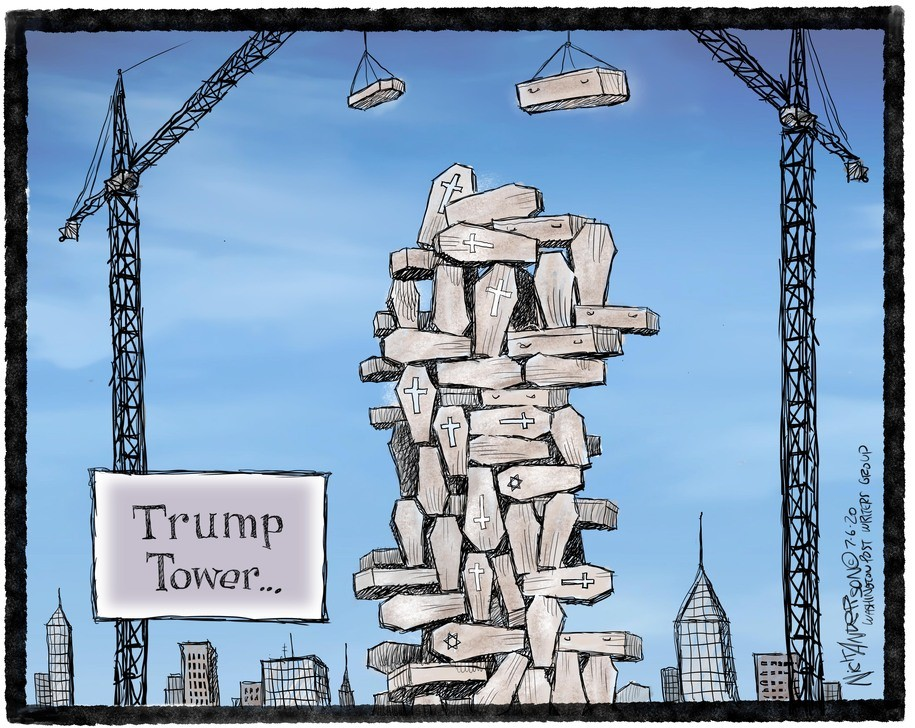 DUMP TRUMP AND DITCH MITCH TO MAKE AMERICA GREAT AGAIN!!!
1 Kudo
125 Views
0
Share
Report
Reply
Turn on suggestions
Auto-suggest helps you quickly narrow down your search results by suggesting possible matches as you type.
Showing results for
Show  only  | Search instead for
Did you mean:
Users
Announcements