Those terrifying words from Comrade Trump illustrate what's obvious to Non Trump Cult members, he wants to be a dictator like his heroes around the world.

Well, I don't know what will happen in Nove. but if the Democrats don't win prepare yourself to 2020./  Because Trump will get re elected.

If anyone but Hillary had been the Democratic nominee in 2016 he wouldn't have been elected for this term.  Until they have anyone of substance to offer, there is no doubt he'll be reelected.

Had the Russians not helped trump win, Hillary would be President.

No one in authority has said that. Do you have some secret info known only to those that are "special"?

whiney boy is yet again blaming HRC and not acknowledging the fact that they have been brainwashed and apparently enjoy that role of being stupid.     Wow, maybe they will re-post a picture that is full of stock-shutter folks saying "the party left me" = paid for by the GOP.

"whiney boy" - I saw no one blame Hillary, she did not nominate herself. That was the Democratic voters.

As to "brainwashed" - pols sell their case. One will always win out over the other. Can we assume that those that voted for the winners are always "brainwashed"?

Trump Cult members will never accept that their Supreme Leader wants to be a dictator.

Guys and Gals,  don't  tell me that I have not warned you all abut this.
This title and words are the most dangerous words that a President had said in the history of this county.

and people are going along with their lives without really pausing    and thinking what an of this will mean.

Again for the ones that don't understand
Those are the words of a Dictator/Autocrat  that is telling his supporters that he is the only one that will tell the truth/
And if any of the TrumpFollowers that have some sense don't find any of this contrary to what is supposed to be a Democracy, then, I guess we deserve what we will get.
We are being indoctrinated to only believe what he says and does. and I don't see many Americans horrified by those words.

Well, I don't know what will happen in Nove. but if the Democrats don't win prepare yourself to 2020./  Because Trump will get re elected.

There is a vast difference between "What you see and hear" and "What you are told by the media".

If you want to draw assumptions, be sure of which you are referring to.

'What You're Seeing... Is Not What's Happening.' People Are Comparing This Trump Quote to George Orwell

President Trump drew comparisons to George Orwell’s 1984 in an attack on the media during a speech at the Veterans of Foreign Wars national convention Tuesday.

In his address to the convention in Kansas City, Trump defended his decision to slap tariffs on the U.S.’s trading partners. As Trump told the crowd that “it’s all working out,” he warned those in the audience against believing what they see in the news.

“What you’re seeing and what you’re reading is not what’s happening,” Trump said.

For some, the quote immediately recalled a line from Orwell’s dystopian novel 1984: “The party told you to reject the evidence of your eyes and ears. It was their final, most essential command.”

Thing is ALL the dupes in the Republican base will still vote for whoever the GOPerLords put on the ballot.

You want this long National Nightmare to end, VOTE OUT THE NRAGOP IN NOVEMBER. No more sitting out elections because you can't fall in love with the Democratic candidate or don't think there's any difference between the parties.

Yep, just what we need - a one Party system run by Socialists. Do you really feel all that entitled to the fruits of the labor of others what you'd be willing to go done that path?

As to the post you were theoretically responding to to but ignored to make your standard rant - “The party told you to reject the evidence of your eyes and ears. It was their final, most essential command.” President Trump never said that or anything like that. Once again, we have a fraud for a title.

@MIseker wrote:
SO now its " her mama dresses her funny"? POsting pics because you have no words?

Here's a picture of what DID happen when trump surrendered to Putin - it's easy to tell who won and who surrendered at Helsinki. 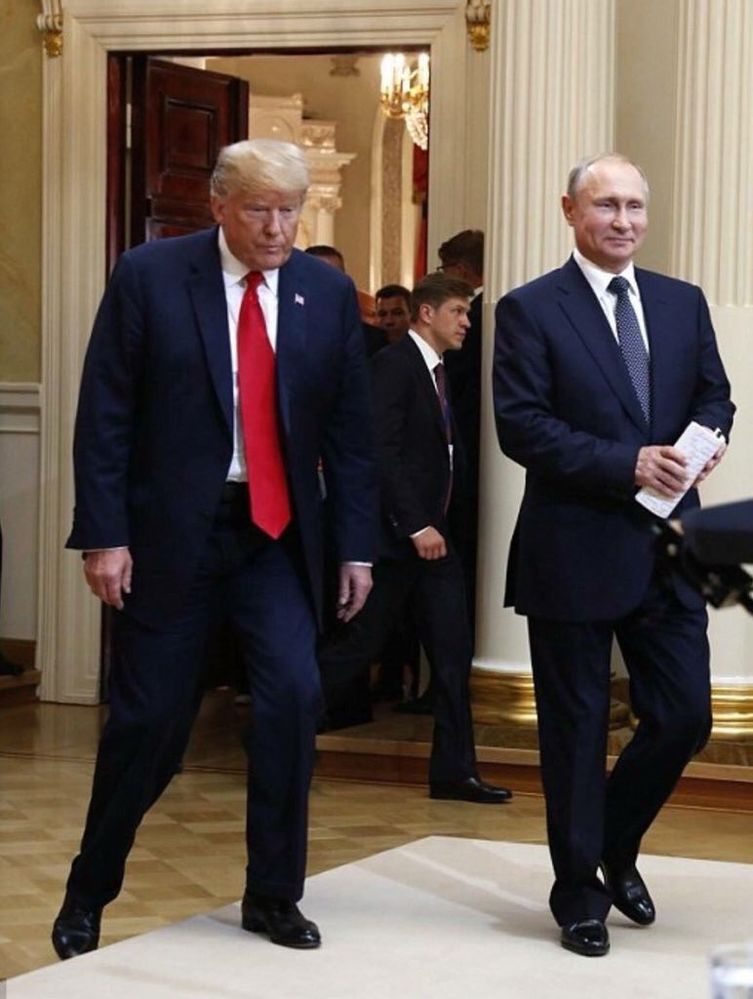 Given that trump lies twice as often as he tells the truth, it's very obvious that when trump says "What You're Seeing...Is Not What's Happening" - that's just another of trump's 3000 plus lies...

So  - explain - in exactly what manner what Hillary was wearing has ever had anything to do with yet another of trump's 3000 plus lies?

Oh - we get it - it's an accepted trump supporting attempted diversion from the fact that trump is lying - again - and sure enough - trump supporting yokels swallow that - hook, line, and sinker...

@MIseker wrote:
SO now its " her mama dresses her funny"? POsting pics because you have no words?

The mistake a lot of politicians make is forgetting
they've been appointed but thinking they've been anointed.
Report Inappropriate Content
Reply
0 Kudos
Highlighted

183 Views
Message 49 of 66
Thing is ALL the dupes in the Republican base will still vote for whoever the GOPerLords put on the ballot.

@scout.........we are not dupes and I think you are skating on breaking the TOS here. I personally have not ever met a GOPerLord and think it may be a fig newton of your imagination.
Report Inappropriate Content
Reply
1 Kudo
Highlighted

Guys and Gals,  don't  tell me that I have not warned you all abut this.

You have not warned us all "abut" this.

Centrist.     you are sigining Guys and Gals, what are you trying to say?  I don't understand.

no name
Report Inappropriate Content
Reply
0 Kudos
Turn on suggestions
Auto-suggest helps you quickly narrow down your search results by suggesting possible matches as you type.
Showing results for
Show  only  | Search instead for
Did you mean:
Users
Announcements