Nicholas Sandmann, one of the students from Covington High School who was vilified in January 2019 for innocently standing at the Lincoln Memorial with his student group while wearing a MAGA hat, won his defamation suit against the Washington Post today.

The Covington kids were called names and social media erupted with comments as to Sandmann's "punchable face." Criticism erupted over Sandmann's political expression, and the Washington Post assumed that the boys were racist and derogatory to the man Sandmann can be seen here talking to.

The terms of the settlement have yet to be disclosed. Sandmann was also involved in litigation against NBC. CNN recently settled a $275 million lawsuit with Sandmann.

In 2019, the CBC had to apologize for their broadcast of the fake news about the Covington kids. Sandmann filed lawsuits against multiple news outlets.

The story of the Covington kids highlights the mainstream media bias that has been directed against conservatives and Trump supporters since the heated 2016 election season. 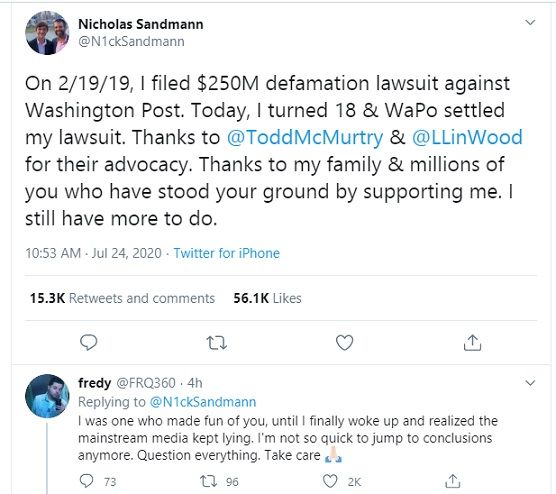 "I'm not so quick to jump to conclusions anymore. Question everything."....

It would be better if the media learned a lesson, but I don't think so.

Fake news with an intent to injure will cost ya... so it seems.

0 Kudos
229 Views
0
Share
Report
Reply
Turn on suggestions
Auto-suggest helps you quickly narrow down your search results by suggesting possible matches as you type.
Showing results for
Show  only  | Search instead for
Did you mean:
Users
Announcements