where is he vacationing this week?

Trump was playing golf  and tweeting during the McCain funeral. 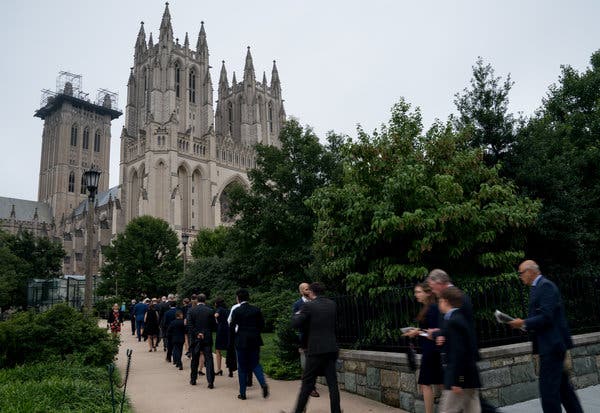 As Senator John McCain was eulogized in the presence of much of the American political establishment at Washington National Cathedral, President Trump, pointedly uninvited, engaged in what by now is a familiar weekend routine.CreditCreditErin Schaff for The New York Times

WASHINGTON — For the clusters of onlookers, besuited power players and three former presidents who had all traveled to Washington National Cathedral, the muggy day was a historic opportunity to memorialize the life of Senator John McCain, who was remembered as a deeply patriotic war hero, a former Republican presidential candidate and a scrappy, humanly flawed, ultimately idealistic lawmaker.

For President Trump, it was Saturday.

In the many discussions about how to mark his life that Mr. McCain had with his staff and family before he died, he had made clear he did not want Mr. Trump to participate in anything they planned.

So as Mr. McCain was eulogized in the presence of much of the American political establishment, Mr. Trump, pointedly uninvited, engaged in what by now is a familiar weekend routine. He sent a series of angry tweets aimed at some political adversaries, then left the White House to play a round of golf at his resort in Virginia.

87 Views
Message 2 of 4
After so many mini bombs that went off on Friday, Trump had a horrible week, and it's only going to get worse, MUCH WORSE. His disapproval is now at 60% and for the first time ever, 50% of Americans want impeachment proceedings to start against him. Americans are finally giving him a good look, and they don't like what they see. Is it November yet?????
Report Inappropriate Content
0
Kudos
87
Views
Reply
0 Kudos
Highlighted

Is there a Never Never Land?

Another Manafort associate has plead guilty which is probably why Mueller would not allow a plea deal with Manafort last week.  He now has so much more pressure to put on Manafort. Both Manafort and Trump know this.

The McCain tributes are happening all across the nation with some pretty barbed comments about the lack of integrity on the part of our temporary POTUS.

The funeral for Aretha Franklin was also this weekend with similar comments about Trump's racism.

I think Trump's fingers are going to explode tomorrow morning from overuse. BTW, where is he vacationing this week?

Report Inappropriate Content
1
Kudos
114
Views
3
Replies
Reply
1 Kudo
Turn on suggestions
Auto-suggest helps you quickly narrow down your search results by suggesting possible matches as you type.
Showing results for
Search instead for
Did you mean:
Users
Announcements