I hope all took my advice and watched MSNBC Rachel M show last night and learned just what is going on. You now can see it is not just one phone call, but the mob was making money off of everyone they touched in Ukraine. We know Rudy got at least $500,000. Looks like Sec. Rick Perry was moving to get one of his friends in on the action with the U energy Co. The guys from FL were paying off the Trump PAC big time as they are indited for it. I am sure there is a lot more.

I hope all realize this type of thing is going on with everything Dictator Trump does. We just have not heard about it. The mob boss usually makes at least as much as the underlings do in total.

Wait till they get into the SA deals made. We all know 666 Broadway Bldg. was bailed out by SA and that was millions. We know Trumps plan was to build N Power Plants in the middle east, and Israel was involved in that. They say some of our N secrets might have been transferred. I have a feeling that deal will make Ukraine look like the penny arcade. Time will tell. One thing for sure the US has never seen anything like this, and in the end mob ways always destroy everything.

Or at least on a one-way ticket flight to.... 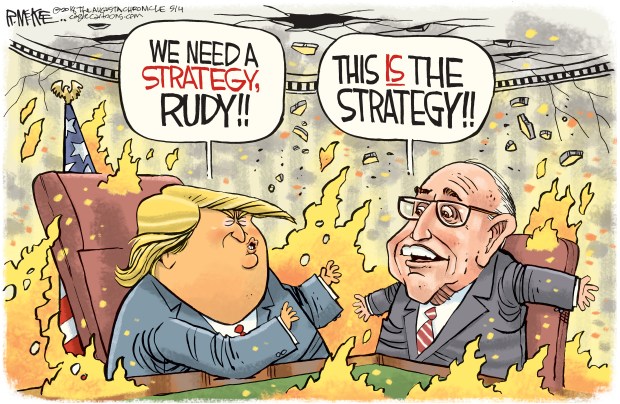 SOMEWHERE ENJOYING THE FLAMES OF CHAOS HE HELPED CREATE!

Well if you were watching TV this evening you heard a lot about Rudy. Bloomberg, CNN, plus one other news source broke stories that involved Rudy. When you put all the new information together with all the old information on Ukraine, and Russia with the Trump crew over the last few weeks it now makes sense. You see a mob style operation with money being paid, Russian Mobster trying to get charges dropped, one of the FL Rudy helpers by previous court records look like a hit man, and there are proven mob ties, money to Rudy, Paul Manaford back into the story, Rudy guest at Pres. Bush one funeral, Trumps super pac and the money it was collecting, meetings at the JD and State Dept. to help in criminal cases on part of Rudy crew. Sound complicated. It is. If you want to understand what is going on go watch the Rachel Maddow on MSNBC this evening as she takes all the stories and brings them to one story. Trump is the mob boss and running the country as a big mob for his own profit, and he and his underlings are making a lot of it. Looks like Rudy replaced Michael Cohen as the enforcer. I now understand why the far right leaders put out all the nonsense stories for the enablers to post and try and divert with. I warn you it is a very complicated story but you need to understand  it to know what is happening.

Where is Rudy Giuliani?

Hmm... good question.  Last time he tweeted (or retweeted) was 2 days ago.

Maybe someone told him to take a break from opening his mouth, much like the break I'm sure Mick M. will indubitably be taking.

Thanks for jogging our memories! trump has literally thrown out so much confusion for the press to chase, and to take away from all of the current testimony against him...so, we have Syria, G7, mulvaney press conference (interesting the timing of that!) to look at.  We almost forgot about rudy didn't we...but, that is probably what trump wants, isn't it, to forget about ruby!

But, unfortunately for trump, rudy is in the crosshairs of investigators!

Report Inappropriate Content
5
Kudos
691
Views
Reply
5 Kudos
Turn on suggestions
Auto-suggest helps you quickly narrow down your search results by suggesting possible matches as you type.
Showing results for
Search instead for
Did you mean:
Users
Announcements