That is not only true its a fact that I am sure that Chuck Schumer and Nancy Pelosi know but there hate of Trump is more important to them than the safety of our country. Shame on them and the people that support their agenda!

Out board walls and fences are working and needed. One of many things needed to keep our country safe.

"Hate of Trump".........ah yes. The cry of every parent who has sired a lazy and vicious little family monster then must find a way to justify the illusion of the purity of their little snowflake.  I remember when Republicans had higher values than the ability to craft an excuse.

Border walls work. They are just the least effective way of controlling the border at the greatest cost.  Pretty much what you would expect from a snowflake.

That is not only true its a fact that I am sure that Chuck Schumer and Nancy Pelosi know but there hate of Trump is more important to them than the safety of our country. Shame on them and the people that support their agenda!

Out board walls and fences are working and needed. One of many things needed to keep our country safe.

Instead of spending beaucoup dollars on such an unproductive boondoggle as a "wall", how about spending a small fraction of that encouraging the Central American countries to clean up their economies, police departments, crime, and governments (all this is "being a good neighbor") so that their people don't crave to emigrate out of their country.

The President's budget for fiscal year 2019 was released today and it proposes a budget of $396 million for the Peace Corps.Feb 12, 2018

10 x that would be less then Trump wants to spend on a  unproductive boondoggle .

While teachers in the US are leaving the profession at the highest rate on record in 2018.

It's a lot of money that could be used better elsewhere to stroke Trump's ego.

Instead of spending beaucoup dollars on such an unproductive boondoggle as a "wall", how about spending a small fraction of that encouraging the Central American countries to clean up their economies, police departments, crime, and governments (all this is "being a good neighbor") so that their people don't crave to emigrate out of their country.

Of course, the US itself created conditions for a lot of the misery in those countries (but not all). And trying to develop such countries has its own risks, we've been down that road with anti-surgency, etc, supporting repressive governments, etc.  But if done on open levels, I could see some support/exchange between police departments in the US and these countries, and economic development as well.

There is some precedent for this: the "maquiladoros" of the 1980's/1990's where US and other companies set up plants in Mexico near the US border. The idea was to utilize the lower cost labor there and benefit both countries, as well as giving China competition on this front. I think this pretty much failed in the end. However, the idea still seems sound.

The latest bs. is full of  half-truths, this one straight out of Breittys website.    It is full of half-truths, aka propaganda.    For starters, the RW need to be reminded that the funding for this bill was later cancelled because the contractor for nearly 2 T funds had no idea how to do what they were contractually obligated to do.

Why is it that the copier of their story didn't bother to read about the demise and cost savings that was implemented by #45 DHS?      Failure of due diligence often leads to embarrassment, if the RW even bother to be concerned about anything other than propaganda to prove their lie. 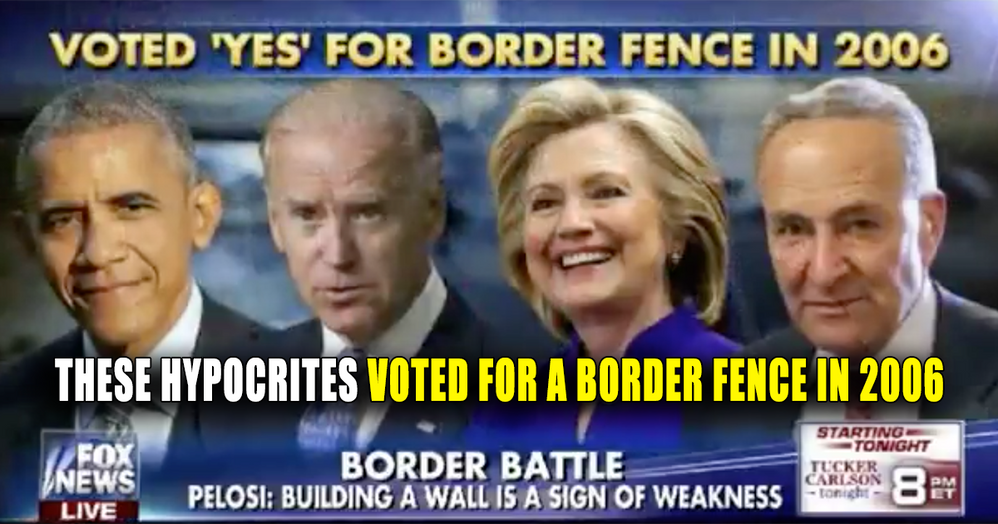 The Democrats have been trying to have this conversation for over 10 years. Republicans would rather use immigration to stir up their lofo base.

And starting Thursday, Pelosi will be happy to discuss a deal with Mr. Deal Maker if he ever comes out of hiding.

Congressional Democrats have made it clear that they will oppose President Trump’s commonsense request for $5 billion to expand fencing and begin work on a wall along our southern border. But the fight over the wall is just a small skirmish in a war to decide the future of our country and whether we can control our own borders.

Neither President Trump nor the Democrats created the migrant caravans currently camped to our south. The caravans were organized and launched outside of the U.S. with the intent of demonstrating that large groups of immigrants can breech our borders illegally and with impunity – an outcome that will only encourage more illegal immigration.

Nor did Trump or the Democrats draft the United Nations global compacts on migration and refugees, looking to a day when international “norms” supplant the right of sovereign nations to manage their own borders.

It was not Trump or the Democrats who flooded Europe with over 1 million refugees and dispersed them – without vetting – throughout the continent.

But European officials who opened their borders to the migrants now find themselves beset by an intense political backlash, severe security challenges, and widespread social and economic unrest.

Europe today stands as a case study in the problems caused by uncontrolled migration.

If America fails to maintain firm control of who gets into our country – and who stays – the resulting crisis could make the woes of Europe look petty.

A Gallup World Poll released earlier this month found that 15 percent of the world’s adults said they would move permanently to another country if they could. That’s about 750 million people. Assuming the adults brought their children, the number of migrants would be higher.

Gallup also states in reporting on the poll: “One in five potential migrants (21%) – or about 158 million adults worldwide – name the U.S. as their desired future residence.” This number would be higher when children are added.

A mass migration of such a large number of people to the U.S. would be profoundly destabilizing – economically, socially and culturally.

How would we provide the food, housing, clothing, jobs, schools, transportation, infrastructure, English language instruction, and everything else needed for so many new immigrants?

And where would we get the money to do all this?

Admitting massive amounts of new immigrants to our country could also be dangerous.

Enemies of the West have already tried to weaponize migrant flows, as has happened with Syrian migrants. If the open-borders crowd gets its way, sooner or later evil-doers will launch a deliberate effort to send refugees to America. That would have far more impact than tweets from Russian President Vladimir Putin.

Polls consistently show most Americans favor legal immigration. But a November Gallup poll also showed Americans see immigration as one of the nation’s “biggest problems.” They want a system that works.

For starters, the president wants to beef up border security. Most Americans share that desire. The wall can help.

Importantly, President Trump’s border security strategy goes beyond the wall. He also wants to end “catch and release” and “birthright citizenship” for the children of illegal immigrants.

“Catch and release” results from loopholes in our current system. People arrested upon entering the U.S. illegally routinely apply for amnesty. Those who promise to return for a court hearing are released, but the vast majority never come back. Instead, they simply walk away into a new life as “undocumented immigrants.”

Closing this loophole would be a huge deterrent to illegal immigration.

And here’s another thing our country needs to do: Enforce existing U.S. immigration laws and deport people found to be living here illegally.

Tuesday’s announcement of a $10.6 billion U.S. aid package for Mexico and Central America reflects the desire to ease immigration pressures to our south. If that money is spent smartly – to improve governance, public safety and create a space for private economic growth – then it could help.

President Trump didn’t start Washington’s border wars. But if he sticks with his entire border control strategy, he should succeed in winning the immediate political debate and fixing our broken immigration system for the long haul.

We could learn much by studying what is going on in Europe right now.

If we could get democrats and republicans to actually have a conversation with each other.  It appears the Russians have been pretty successful at creating dissension between them, IMO of course...

VIMTSTL
Report Inappropriate Content
Tags (4)
6
Kudos
931
Views
139
Replies
Reply
6 Kudos
Turn on suggestions
Auto-suggest helps you quickly narrow down your search results by suggesting possible matches as you type.
Showing results for
Show  only  | Search instead for
Did you mean:
Users
Announcements