@MIseker wrote:
The Right loves to post these mostly true stories about Venezuela. The topic post here insinuates Cortez and Sanders want a government run like Venezuela. Prove it. Show us all who exactly wants the US to run like Venezuela. Another bogus topic. The topics statement is a lie, then accuse imagined " liberals" of committing the deed. This method doesnt fool anyone.

Oh - it does fool someone - it fools the easily scammed right-wing bozos, yokels and trump supporters that copy, paste, and exchange these stories with each other...

186 Views
Message 32 of 38
The Right loves to post these mostly true stories about Venezuela. The topic post here insinuates Cortez and Sanders want a government run like Venezuela. Prove it. Show us all who exactly wants the US to run like Venezuela. Another bogus topic. The topics statement is a lie, then accuse imagined " liberals" of committing the deed. This method doesnt fool anyone.
So it begins.
Report Inappropriate Content
2
Kudos
186
Views
Reply
2 Kudos

Would you call their economic model "Free Market Capitalism" - or something else?

Now @rk9152 what are you doing?  I have told you already it's almost unfair...  Similar to shooting fish in a barrel, so stop being so mean...

Would you call their economic model "Free Market Capitalism" - or something else?

Socialism did get a bad rap because of Venezuela. On the other hand, Canada, Norway, Finland, The Netherlands and so  on have some form of socialized government policies.  You can't take one example when that example has been so horribly executed. I think we all agree that, , a capitalist economy is the most efficient but if you look at how Trump has run this one into the ground, it would not be the example you would want to use.

Most Americans don't care what you call the system as long as it is the most cost and outcome effective.  Certainly, Venezuela has not been run efficiently but Canada, and Norway, for example, have done much better than the United States.

The actual events would suggest the way to avoid Venezuela's chaotic economy would be to eliminate the 3 Oligarchies which control over half of the economy.

One Oligarchy is (amazingly) the huge Cuban influence in the oil industry. Cuban "advisors" brought in decades ago have been able to subvert reform efforts in order to ensure a continuing supply of cheap oil for Cuba.

A bigger factor is the half-dozen families who control the food supply and have egineered fake shortages to undemine support for the Government.

The third are the ultra rich Venezuelans living in the US who  syphone enormous profits out of the country without being taxed, depriving the Government of the revenue needed to maintain essential public services.

But the biggest factor in Venezuela's economic disaster was electing a dictator who had no idea how to run a Government - you know, someone like Trump - who failed miserably to control the Oligarchs.

It’s hard to overstate how disastrous the reign of Hugo Chavez and his successor Nicolas Maduro has been for Venezuela. A recent series of Bloomberg articles vividly depicts the hellish, never-ending struggle for survival in Caracas, the country’s capital. Hungry children roam the streets, people are fleeing the country, health care is almost nonexistent, violence is endemic, even water is scarce.

Chavez’s so-called Bolivarian revolution took a peaceful, middle-income country and transformed it into a nightmare that puts the ruinous Soviet Union of the 1980s to shame.

It’s important for other countries — including wealthy ones like the U.S. — not to ignore Venezuela, but to use it as a cautionary tale. Politicians like Senator Bernie Sanders and Representative Alexandria Ocasio-Cortez have embraced socialism, as have many young Americans. But what are the lessons of Venezuela? Why did the country become such a basket case?

The Bolivarian revolution’s defenders often make excuses for the Chavez-Maduro regime by claiming that the country’s penury is the result of outside forces. For example, some argue that it was the fall in oil prices in late 2014 and 2015 that sunk the country. Venezuela is a petrostate — petroleum products constituted about 95 percent of the country’s exports in 2014, so the price decline was naturally a blow.

But although lower oil prices undoubtedly made things harder for Venezuela, they can’t be the primary culprit in the collapse. Venezuela stopped releasing many of its economic numbers in 2014. But other petrostates — Saudi Arabia, Russia, Nigeria, Angola and Kuwait — saw their incomes stagnate or even fall after 2014, but they didn’t experience anything remotely like the devastation that has hit Venezuela: 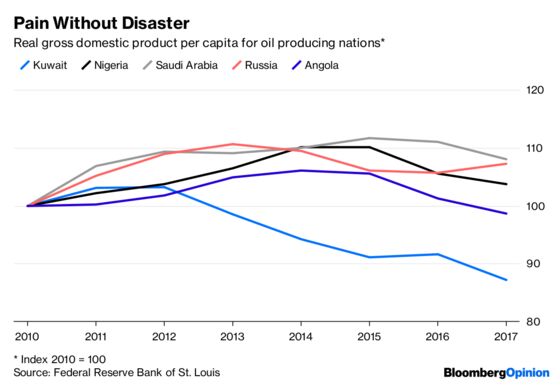 Nor did the country come under attack by capitalist powers. Under President Barack Obama, the U.S. did impose sanctions against a few of the country’s officials in 2015, and President George W. Bush refused to sell arms to Venezuela, but these weren’t broad sanctions that had the power to seriously affect the country’s economy. No reactionary armies or bombers devastated Venezuela’s cities; the country’s impoverishment is all of its own making.

Venezuela’s critics can also be too sloppy. It’s easy to wave one’s hands and declare that socialism always fails. But Bolivia, another resource-dependent Latin American country, elected a socialist president, Evo Morales, in 2006. And Bolivia has been doing great. The country’s living standards, which had stagnated for 30 years, have grown rapidly and steadily since Morales took power: 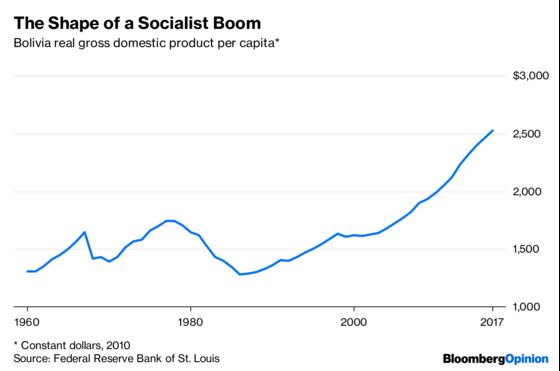 And at the same time, Bolivia has managed to reduce inequality dramatically: 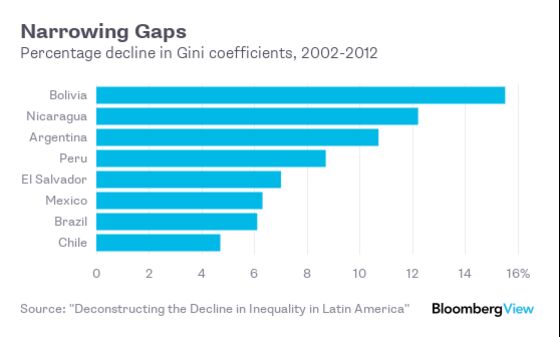 Despite ominous signs that Morales is becoming more authoritarian, Bolivia has not yet experienced anything like the devastation that has afflicted its ideological fellow-traveler to the north.

So if it wasn’t oil prices, external pressures, or the inevitable tendencies of socialism, what did sink Venezuela? It’s hard to identify the exact policy mistakes that Chavez and Maduro made, but three failures loom large — macroeconomic mismanagement, nationalization of industry and interference in the state-owned oil company.

The worst scourge of Venezuela’s economy has been hyperinflation: 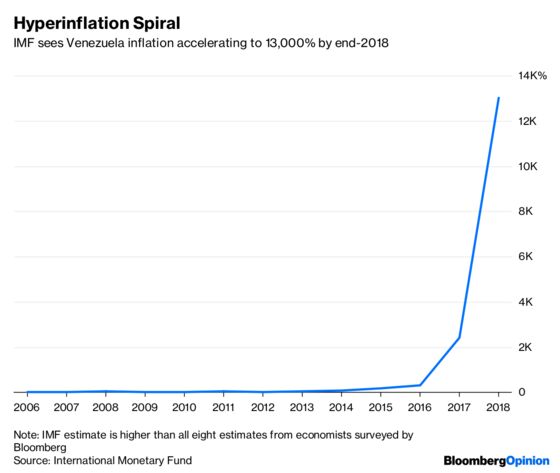 This level of price increases makes it impossible to save money. Even though incomes tend to go up along with prices, the sheer unpredictability when prices are rising by 20- or 40-fold a year makes it very difficult to plan consumption. You may think tomorrow’s meal will only cost 10 million bolivars, but instead it might cost 20 million, meaning you go might hungry if you don’t buy immediately. It’s also very hard for companies, even state-owned ones, to plan their investments when the price of those investments is highly uncertain.

Meanwhile, hyperinflation has led the government — predictably — to impose price controls. Those created shortages of basic necessities, and made people turn to the much less-efficient and corrupt black market.

It’s not clear how hyperinflation gets started — price controls, currency depreciation and fiscal deficits can help kick it off, but once it gets started it’s very difficult to stop. Venezuela should have seen this menace coming, as its inflation rate steadily crept up year after year, but its leaders just made the problem worse. Bolivia, meanwhile, has managed to keep inflation very low.

Another big mistake was large-scale nationalization of industry and expropriation of private property. Chavez was very fond of nationalizing both foreign- and domestically-owned businesses of all kinds. This is a sure way to wreck the private sector — if local business owners and foreign investors don’t think their property is secure, they won’t invest, and output will languish. This can cause a spiral, where the government is forced to nationalize ever more of the economy as the private sector pulls back.

Morales, in contrast, has been much more careful with nationalizations in Bolivia, mostly limiting them to the oil and gas industry and the electric grid — centralized, stable industries where government ownership is common around the world.

Finally, Venezuela’s leaders interfered with the smooth operation of an industry that was already government-run — Petroleos de Venezuela SA, or PDVSA, the state-owned oil company. The company once operated relatively independently, but Chavez meddled in its affairs, firing employees and replacing them with apparatchiks, starving the company of investment in order to extract money for his own purposes, and driving away or expropriating the holdings of foreign partners who helped PDVSA keep up production. The unsurprising result is that Venezuelan petroleum investment has collapsed, oil infrastructure is falling apart, and production is in free fall— all this in the country with the world’s largest proven crude oil reserves.

Socialists in the U.S. should take note — if there’s a right way to do socialism, this isn’t it. Instead of cautious policies like those of Bolivia, Venezuela’s leaders chose to ignore the menace of hyperinflation, nationalize private businesses across the economy, and muck up the smooth operations of PDVSA. The result was predictable — one of the worst self-inflicted economic catastrophes of the century so far.

VIMTSTL
Report Inappropriate Content
Tags (4)
0
Kudos
208
Views
37
Replies
Reply
0 Kudos
Turn on suggestions
Auto-suggest helps you quickly narrow down your search results by suggesting possible matches as you type.
Showing results for
Search instead for
Did you mean:
Users
Announcements