Another take on the same subject.

No, the Unemployment Rate Didn’t Really Drop in May

he Bureau of Labor Statistics (BLS) surprised the markets and most economists Friday with an announcement that the unemployment rate fell from 14.7 percent in April to 13.3 percent in May. President Donald Trump had the temerity to boast that George Floyd, the unarmed black man killed by a white police officer in Minneapolis, was “looking down from heaven” to admire those numbers. “This is a great day for him,” Trump said in the Rose Garden. “This is a great day for everybody.”

Beyond the president’s remarkable and offensive invocation of Floyd, there is good reason to be skeptical of his administration’s latest report.

BLS asserts that 20,935,000 Americans were unemployed in May, attributing the decline to employers adding 2,509,000 jobs in May as states allowed “a limited resumption of economic activity.” But it’s not that simple. The unexpected decline in the jobless rate is based on a survey of businesses and households conducted over the week of May 16th, and BLS has also reported that 29,965,415 Americans received unemployment insurance benefits in the same week.  That’s a gap of 8,980,415 people, enough to raise the May jobless rate 5.7 percentage points to 19.0 percent and much closer to economists’ expectations.

How did the Labor Department come up with such a low figure?  Part of it is the Payroll Protection Program: The BLS counted anyone who employers say were still being paid as employed “even if they were not actually at their jobs.”  Part of it involves how the BLS treats the many millions of people now on furlough and not being paid. They are considered “unemployed on temporary layoff.”  But if BLS expects them to return to their old jobs, based on the survey, they do not count among the unemployed.

Those judgments are left to the BLS’s discretion, and the agency does not issue any data on those decisions. Yet a recent analysis from the Becker Friedman Institute at the University of Chicago estimated that 42 percent of people furloughed by the COVID-19 crisis will never get their old jobs back, and only 30 percent of those laid off will land new jobs later this year. With 30 million people receiving unemployment benefits, that analysis is more consistent with unemployment at 19.0 percent today than 13.3 percent.  BLS itself acknowledges in its May report that counting those on furlough as unemployed would raise its official rate to 16.3 percent.

Sometimes, unexpected events produce wildly inaccurate results from computer models that assume the unexpected won’t happen. Perhaps there is a glitch in the BLS unemployment model that couldn’t accommodate disruptions from the COVID black swan. We also have seen the Trump administration interfere with scientific analysis in other areas, such as when it directed what models the U.S. Geological Survey could use for the mandated National Climate Assessment. It would be unprecedented for the White House to pressure the Labor Department to produce a jobless report that serves Donald Trump’s needs and desires.  But unlike the May unemployment report, it would not surprise anyone.

Who is Sister Toldjah?  Oh, she writes for the RedState.  Shall we go to Media Bias/Fact Check for a report?

Overall, we rate RedState borderline Questionable and strongly Right Biased, based on story selection that always favors the right and use of emotionally loaded (sensationalized) headlines. We also rate them Mixed for factual reporting due to poor sourcing of information and a few failed fact checks

But let's be fair.  There are those who think the WaPo is "totally biased".

Overall, we rate The Washington Post Left-Center biased based on editorial positions that moderately favors the left and factually High due to the use of proper sources and a reasonable fact check record.

And let's not forget the NYT.  Envelope, please.

Overall, we rate the New York Times Left-Center biased based on word and story selection that moderately favors the left, but highly factual and considered one of the most reliable sources for news information due to proper sourcing and well respected journalists/editors. The failed fact checks that occurred were on Op-Ed’s and not straight news reporting.

Um, let's see... which one to believe first? 🤔  I'm thinking pretty much a no-brainer.

@jimc91  Frankly, I have very little knowledge about any of the individuals that you have posted about. But, I do understand something that I believe to be true.
We had over 40 million people filed for unemployment. but now after the opening of many States and bussneses beginning to open and see customers and their products are being brought to markets. Hotels are opening. vacation spots are becoming full, Disneyland is open and functioning. and of of these businesses have employees. So why is it so strange that many millions of  Americans have returned to their jobs.? Where do you think that any of these jobs have gone?
We won't see the impact of how good or how bad this economy will be, until we have a nation that is completely opened and normalcy is returned to our lives. at that time we will see where our economy lies.

This is just too FUNNY!!  Do ya think Paul Krugman, (NYT) and the the totally biased WAPO is suffering acute TDS?

Sort of reminds me of the comment President Obama made during the run up to the 2016 election:  "What do you think you have a magic wand that you are going to wave and then all this manufacturing jobs are going to come back?"

Yeah the dimms are just too funny and know nothing about how business operates or thinks because they are all takers!  When will they ever learn?

Somehow the idea that Democrats do not know how business thinks actually is mildly amusing. Many of us have operated successful businesses in our careers.  Almost none of us made our money as reality stars and certainly none of us lost a billion (with a "B") dollars over ten years.

Democrats and media outlets like the Washington Post were among the hardest hit by the news, with the WaPo having to rewrite their pre-canned headline once the news broke: 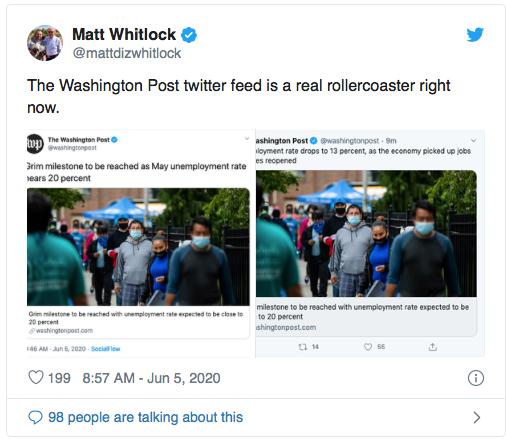 Among the even harder hit folks over this surprising news was liberal New York Times columnist and Nobel prize-winning economist Paul Krugman, who just couldn’t bring himself to admit that this was an encouraging sign for an economy that has been devastated by the lock downs put in place in various states two months ago to combat the Wuhan coronavirus. 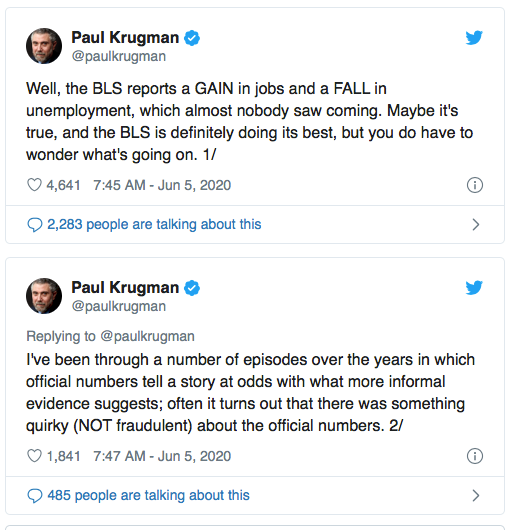 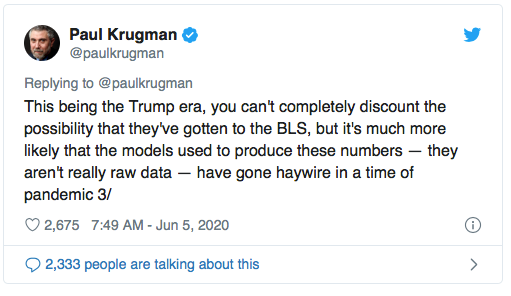 Instead, Krugman, without evidence, floated some bizarre conspiracy theories about how President Trump may have “gotten to the BLS”: 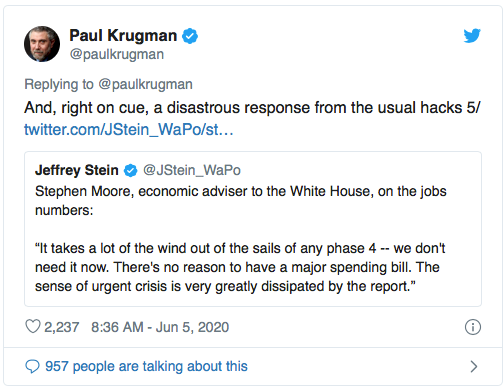 But whether or not Trump had allegedly strongarmed the BLS into reporting good numbers, Krugman says it’s still bad news or something because that means less people will have to be dependent on government assistance: 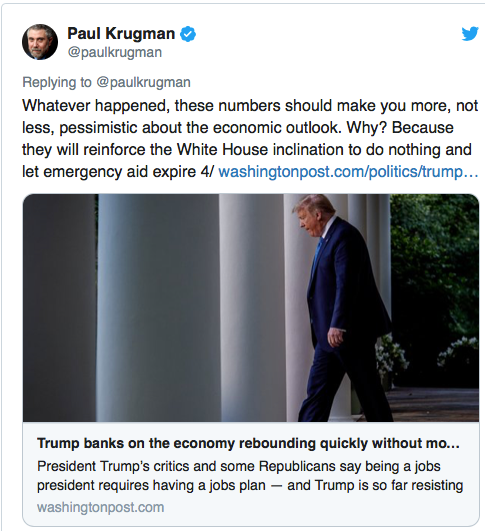 And then, in a moment completely devoid of any self-awareness whatsoever, Krugman called Trump economic adviser Stephen Moore a “hack” for his response to the jobs report: 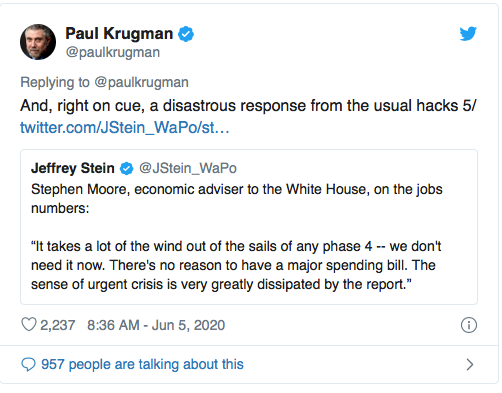 If that’s not the pot calling the kettle black, I don’t know what is.

There are two big problems with Krugman’s hot take. The first one being that not even former Obama officials are buying his conspiracy theory about Trump and the BLS: 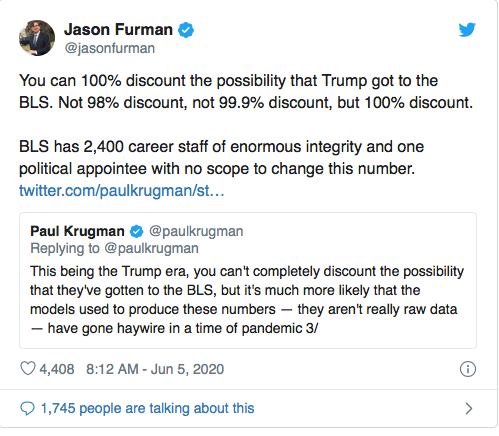 The second big problem with it is that, well, just a few years ago Krugman mocked people who would dare suggest manipulation of job numbers by a presidential administration: 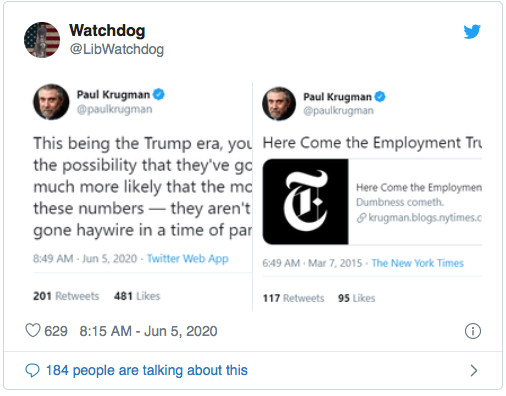 What a complete and total buffoon. I’d suggest he delete his account, but it’s better that he doesn’t. It’s just too much fun watching him reveal himself for the clown he is.

This is just too FUNNY!!  Do ya think Paul Krugman, (NYT) and the the totally biased WAPO is suffering acute TDS?

Sort of reminds me of the comment President Obama made during the run up to the 2016 election:  "What do you think you have a magic wand that you are going to wave and then all this manufacturing jobs are going to come back?"

Yeah the dimms are just too funny and know nothing about how business operates or thinks because they are all takers!  When will they ever learn?

Time again to correct the lies by the current WH regime, aka   Reading really does matter.

RWer's here are repeating the lies told by Donald and his enablers.

When the U.S. government’s official jobs report for May came out on Friday, it included a note at the bottom saying there had been a major “error” indicating that the unemployment rate likely should be higher than the widely reported 13.3 percent rate.

The special note said that if this problem started in March when there was a big jump in people claiming they were temporarily “absent” from work for “other reasons.” The BLS noticed this and flagged it right away.

The current WH regime endorses errors / misclassifications as long as none of his followers read or care.     How do we know this:   they wrote a thread that repeated the error and essentially that the pandemic was over - just another day ending in Y    https://www.washingtonpost.com/business/2020/06/05/may-2020-jobs-report-misclassification-error/

PRO-LIFE is Affordable Healthcare for ALL .
Report Inappropriate Content
3
Kudos
577
Views
15
Replies
Reply
3 Kudos
Turn on suggestions
Auto-suggest helps you quickly narrow down your search results by suggesting possible matches as you type.
Showing results for
Show  only  | Search instead for
Did you mean:
Users
Announcements