Two men were charged Friday in an alleged assault against a Black man who was seen in a viral video being held against his will in the woods near an Indiana lake on the Fourth of July.

Sean Purdy and Jerry Cox are charged with various crimes, including confinement and battery against 36-year-old Bloomington man, Vauhxx Booker, according to IndyStar. Monroe County Prosecutor Erika Oliphant has filed two active warrants for the two men and says Booker will face no charges.

Booker, a member of Monroe County Human Rights Commission, posted his account of the July 4 incident along with video to his Facebook account, writing, “I don’t want to recount this, but I was almost the victim of an attempted lynching.” He went on: “On July 4th evening others and me were victims of what I would describe as a hate crime. I was attacked by five white men [with Confederate flags] who literally threatened to lynch me in front of numerous witnesses.”

Booker said he and his friends were visiting a public beach on Lake Monroe outside Bloomington, Ind. to join a gathering when a group of white men said they were on private property and began following them.

Some of the men became belligerent, he said. When he approached “sober seeming group members” to “see if we could smooth things over a bit,” the confrontation escalated. Video posted to social media shows a group of white men holding Booker to a tree as his friends plead with them to release him. In the video, one man shouts at the camera, “You happy about this, you nappy-headed **bleep**? You and your five white friends?” As Booker’s friends leave, one of the men follows, shouting, “Those Black boys want to start it all.”

Attorneys for one of the men in the video claimed Monday that Booker was the instigator.

"Mr. Booker needs to tell the truth about punching people and apologize to the people he has harmed and to all real victims of racism because he has diminished them,” said four attorneys representing Sean Purdy in a statement. “Also, those who were there with Mr. Booker and know the truth should also come out and tell the truth. Mr. Booker was the instigator and agitator. There was no problem until Mr. Booker returned for no legitimate reason. He was the aggressor and became threatening. Mr. Booker was the first to throw punches. Mr. Booker was then restrained. Not beaten. Restrained. For his own safety and the safety of others. LOL.....  He then started race-baiting.

Then stuck around after his alleged 'near lynching' to video his attackers'".

In his Facebook post, Booker claimed there were shouts of “get a noose” and “white power,” although those are not heard on the video. The Indiana Department of Natural Resources (DNR) who responded did not make any arrests at the scene. Booker told the Indy Star that a DNR law enforcement supervisor kept talking about the property owner’s rights.

“This officer was clearly elevating property rights above my life,” Booker said. “That's something we're seeing on a macro level throughout society where Black lives aren’t as important as property.”

Booker believes that he’s alive because strangers stopped to help and film the altercation. "The reason why I'm here today is simply because these folks, they didn't just stop and watch and film my execution," Booker said in an interview with NPR's Mary Louise Kelly. "They became involved. They became active participants. They put themselves in danger when they stepped forward for me."

He added, “I saw the face of George Floyd in my mind. … I didn't want to be a hashtag.”

Last week, the FBI confirmed they were investigating the incident as a potential hate crime and Indiana Gov. Eric Holcomb called it “beyond disturbing.”

"The brief video clip that I viewed with my own two eyes was beyond disturbing," Holcomb said during his weekly coronavirus update. "And that's why it's very important that the DNR... complete their investigation sooner rather than later."

“I believe those DNR officers were in the prosecutor’s office by 8:45 this morning, and I’m sure there were some tough questions that they had to ask those officers,” Liell told Yahoo News last week. “What we’re trying to do is coordinate with them to make sure they have the information necessary to make a good charging decision.”

Bloomington Mayor Greg Hamilton, who said he has known Booker personally for at least five years, said his city had work to do.

“I don’t know what would have happened in the woods around Lake Monroe if there hadn’t been other individuals there and if there hadn’t been a video taken,” Hamilton told Yahoo News. “It’s incredibly important that we as a country, and then me and my community, that we make clear that has no place in our community, and we want to root it out.”

Following a peaceful Black Lives Matter demonstration in support of Booker last Monday at the Monroe County Courthouse in Bloomington, two people were injured after being struck with a car.A 66-year-old woman, Christi Bennett, of Greenfield, Indiana was booked into the Monroe County Jail two days later on preliminary charges of criminal recklessness and leaving the scene of an accident, a jail official said. She was later released after posting $500 bond.

On his personal Facebook page, Booker posted about Bennett’s arrest with the comment, “Justice can only be delayed, but never denied.” 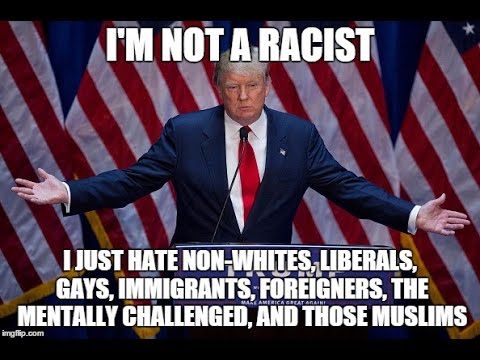 Some racists just want to demonstrate their love for democracy and the Bill of Rights on the 4th of July...just like trump....

Centrist, America can do better, but only after Trump and his ALL WHITE REPUBLICAN PARTY are voted out of office.

Centrist, America can do better, but only after Trump and his ALL WHITE REPUBLICAN PARTY are voted out of office.

You're right CeeTee..."white-wing racists" are indeed scary and an afront to American values.  Wanna bet they claim to be "Christians"?

How the simple minded respond to Trump's hate filled rhetoric!

Can't America do better than this hate-filled White Supremacist?  Of course we can AND WE WILL....


"FAKE 45 #illegitimate" read a sign at the Woman's March in DC, 1/27/2017
1 Kudo
209 Views
0
Share
Report
Reply
Turn on suggestions
Auto-suggest helps you quickly narrow down your search results by suggesting possible matches as you type.
Showing results for
Show  only  | Search instead for
Did you mean:
Users
Announcements