158 Views
Message 1 of 5
True!!! And then look at his business track record too, and its horrible!!!!
Report Inappropriate Content
0
Kudos
158
Views
Reply
0 Kudos
Highlighted

254 Views
Message 4 of 5
and another really important reason we need to re open the government NOW is this, it is open business for hackers right now in the country. And we face ongoing security issues with China, Russia, N. Korea, and Iran. But esp. China and Russia. This is just not acceptable.
https://www.nbcnews.com/business/business-news/shutdown-raises-fear-hackers-cybersecurity-brain-drai...

Of all the promises President Donald Trump made in 2016, one of the most appealing (if implausible) was his boast that he alone could bring back manufacturing jobs. Not for The Donald the weak counsel that it was impossible to make high-priced semi-skilled labor affordable to global companies again.

And now he’s saying he did it, brandishing stats from the Bureau of Labor Statistics that say 284,000 manufacturing jobs have been added by U.S. companies in the last year.

After two years of lies and damned lies, 8,158 and counting, it was only a matter of time before the president got to the statistics.

“Last year was the best year for American Manufacturing job growth since 1997, or 21 years,” Trump tweeted on Monday. “The previous administration said manufacturing will not come back to the U.S., “you would need a magic wand.” I guess I found the MAGIC WAND - and it is only getting better!” 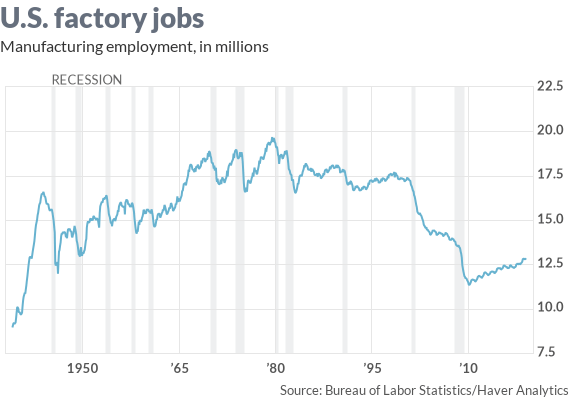 The number of factory jobs is up by more than a half a million since Donald Trump’s inauguration, but they are down 6 million since 1980. All those manufacturing jobs haven’t come back yet.

Problem is, the claim falls apart when you look at the actual numbers. Not only are the numbers for manufacturing employment a third lower — about 6 million jobs — than they were in 1980, and still below 2008 levels. The number of factory jobs in America today is the same as it was the day Pearl Harbor was attacked. All the jobs haven’t come back.

But the improvement has nothing obvious to do with Trump’s protectionist trade policies, including a new trade deal with Canada and Mexico that won’t take effect until Congress ratifies it, which is unlikely.

The tale is told by the specific industries that are adding lots of manufacturing jobs — which are not the same ones hampered by cheap Chinese imports in particular.

Cell-phone manufacturers don’t have their own line in the Bureau of Labor Statistics report, but computer and electronics manufacturing added 23,000. That sounds good, but consider that it includes about 5,000 new jobs in semiconductors, the electronics subsector that does arguably the most high-value-added domestic manufacturing and sells all over the world. Protectionism doesn’t help chipmakers.

The government has toy-industry data only through last June — but that business added just 300 jobs in the last year of data.

The news doesn’t change much when you look at primary metals manufacturing, home to the steel and aluminum makers Trump set out to protect with 25% duties, whose role in 14,000 GM GM, +0.35%  layoffs is still in dispute. Whether metals tariffs cost more jobs at GM or not, primary metals added only 8,000 jobs last year, less than a third of the gain at food manufacturers.

So, about the best spin to put on Trump’s dealings with China is that they may have played some role in adding about 20,000 jobs, but probably didn’t, for reasons I’ll cover shortly.

The biggest gain in manufacturing jobs came in the transportation equipment sector — by far the biggest source of the U.S. trade deficit with Mexico.

But don’t credit Trump’s trade policies too fast. The shortfall on Mexican trade is about cars and parts — but auto makers such as Ford F, +0.36%  and General Motors added only a quarter of the 56,000 new jobs in transportation equipment, even including parts fabricators like Johnson Controls JCI, -1.57%   .

Twice as many gains came from export-led sectors like aircraft — where companies like Boeing BA, +0.02%   are skeptics of Trump’s trade tactics.

So if this all doesn’t add up to Trump’s trade policies having achieved their aim of protecting U.S industries, what has been going on?

Well, a still-decent expansion is doing most of the work. The economy added 2.4 million new jobs in 2018 — or a 1.6% gain. Manufacturing’s climb works out to 2.3% — better, but not hugely so. We’re selling a lot of cars, chips and planes, to be sure, and more food products than we have until recently.

And the industries doing the best point to the opposite conclusion from Trump — many of them are business that are fully immersed in exports and trade. That’s where you see the impact of chips and planes — and defense contractors, who are doing well as government spending rises.

“We may not really know [Trump’s contribution] until the economy moves back to trend growth and we see how many jobs, if any, are added then,” said economist Joel Naroff, arguing that 2017’s tax cut distorted 2018 statistics. “I suspect that we will start reproducing the [smaller] gains in the ’15-’16 period, but we will have to wait and see.”

Report Inappropriate Content
Tags (5)
0
Kudos
274
Views
4
Replies
Reply
0 Kudos
Turn on suggestions
Auto-suggest helps you quickly narrow down your search results by suggesting possible matches as you type.
Showing results for
Search instead for
Did you mean:
Users
Announcements