Trump's 'liberate' tweets were reckless and arrogant. Now imagine if Obama had sent them.

Republicans in Congress spent the past decade sensationalizing and politicizing the actions of President Barack Obama. But don't take my word for it. “LIBERATE VIRGINIA, and save your great 2nd Amendment. It is under siege!”

On Friday, President Donald Trump tweeted out three such missives, calling on someone (Americans? Gun owners? Trump voters?) to “liberate” the already very free states of Michigan, Virginia and Minnesota.

LIBERATE VIRGINIA, and save your great 2nd Amendment. It is under siege!

97.5K people are talking about this
Liberate them from what? Well, presumably from the strict public health measures enacted by governors concerned about the spread of the coronavirus. (Currently, there are around 30,000 confirmed cases in Michigan, and 2,000 people have died.)

But clearly, Trump has been on a bit of a tear lately. (Maybe it’s because his approval numbers have slipped to 43 percent since last month.) On Monday, Trump declared that, “When somebody is president of the United States, the authority is total.”

Trump doesn’t have total authority. Nor is he — or anyone else for that matter — in a position to “liberate” the state of Virginia. But it feels like this is somewhat unprecedented rhetorical territory for conservatives, who have made “small government” their motto for decades.

“I think there’s hypocrisy here, in that one, if President Obama had said those words that you heard from President Trump, that the authority is total with the presidency, conservatives’ heads would’ve exploded across the board,” observed Fox News host Bret Baier on Tuesday.

Indeed. But you don’t have to take Baier’s words for it. America’s memory is short; memory in Washington, D.C., can feel even shorter. But there is value in repetition, and record keeping and remembering.

POTUS: “The Presidential authority is total”. 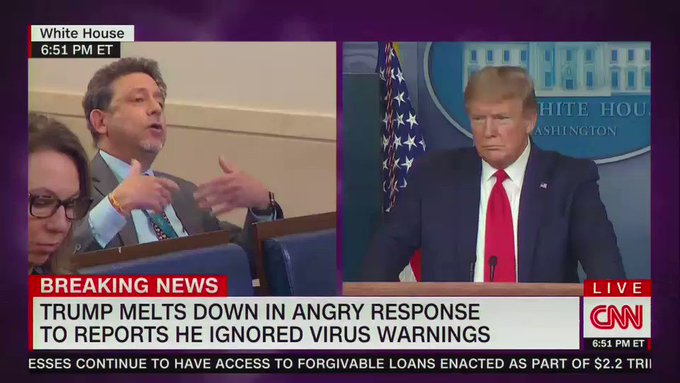 914 people are talking about this

CORRECTION (April 17, 2020, 12:30 p.m. ET): A previous version of this article misstated Rep. Jim Jordan's role on the House Judiciary Committee. He is the ranking Republican, not chairman.

I'm running out of words to adequately express the reckless idiocy of this moron we're supposed to call president. Time for the 25th amendment.

I'm running out of words to adequately express the reckless idiocy of this moron we're supposed to call president. Time for the 25th amendment.

Trump fuels the fire for the protests in certain states using the term "liberate". He promotes the chaos of the protests protesting governors doing what his own coronavirus committee suggests. What nitwits tRump and some of his supporters are.


Man learns from history that man learns nothing from history.
1 Kudo
594 Views
0
Share
Report
Reply
Turn on suggestions
Auto-suggest helps you quickly narrow down your search results by suggesting possible matches as you type.
Showing results for
Show  only  | Search instead for
Did you mean:
Users
Announcements