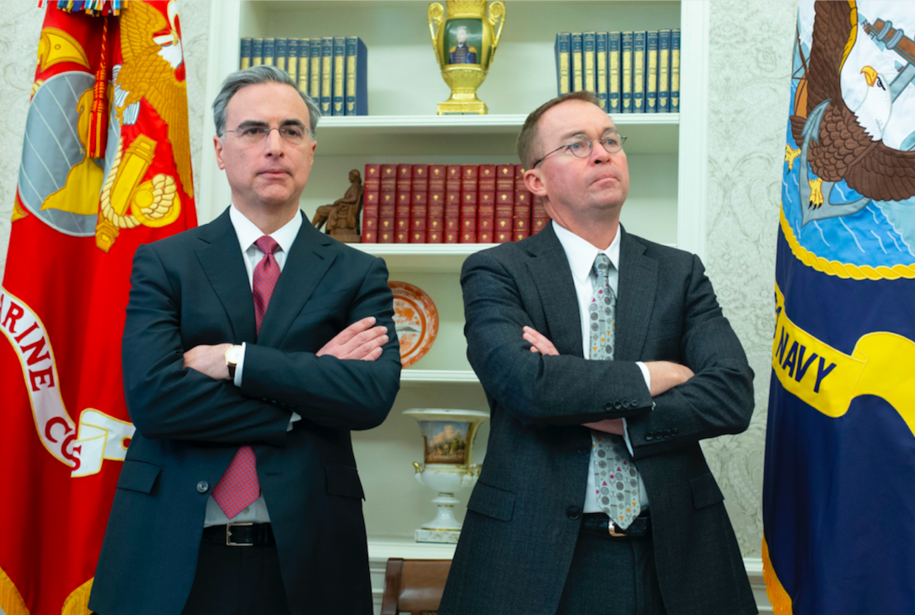 Senate Majority Leader Mitch McConnell’s proposal on procedures for the impeachment trial of Donald Trump sets up an obstacle course designed to exclude damaging evidence and confine discussion of Trump’s crimes to the darkest hours of the night. But it’s far from the only extraordinary bit of pro-Trump illegal-ese to emerge over the extended weekend. On Saturday, Trump’s legal team released a six-page letter calling on the Senate to exercise the most extreme option of McConnell’s proposal and simply dismiss the impeachment without even the pretense of a trial. In the process, they make claims that are extraordinary by any measure, claims that show the real threat Trump poses to constitutional law.

The letter, from White House counsel Pat Cipollone and Trump’s current personal attorney Jay Sekulow, supports a 110-page “legal brief” issued by Trump’s team on Monday. Both documents call on the Senate to reject the case submitted by the House—an option that, by a total noncoincidence, is open to Republicans in two ways thanks to McConnell’s proposed rules. Republicans either can vote to dismiss the case outright or can vote to exclude evidence collected by the House, leaving trial managers to argue a case in which their evidence isn’t allowed in the door. Imagine House managers not only trying to make their case after midnight, but doing so after Republicans vote to refuse to admit key elements of evidence collected in the House hearings. (Hint: Give it a couple of days. You won’t have to imagine.)

But the letter does more than just muster all Trump’s dander behind demands that the whole case be dismissed. It also argues that Trump should be able to bully Ukraine all he wants because it’s just “a comparatively small European republic” and the United States is a superpower. Somehow, this disparity of size is supposed to mean that there’s nothing that Ukraine has that Trump would want. He can’t be guilty of extorting Ukraine because its leaders don’t have “vast treasures at their disposal” to “actually buy off the Chief Executive.”

Which seems very much as if Trump’s attorney’s are not arguing about what Trump is. They’re debating his price.

That’s not all. Cipollone and Sekulow aren’t just ready to do away with Trump’s impeachment; their argument is really aimed at the idea of impeachment. According to them, the reasons for impeachment existed when the United States was “a fledgling, debt-ridden republic situated on the seaboard of a vast wilderness continent.” But now we’re all grown up. And if the corruption comes from America … it’s not an issue.

Trump’s legal duo follows up telling the authors of the Constitution that their document is no longer required by moving to an argument about what they really meant. Forget what it says on paper. Forget what the much-quoted-by-Republicans Alexander Hamilton actually had to say about impeachment in The Federalist No. 65, in which he defined impeachment as dealing with “those offenses which proceed from the misconduct of public men, or, in other words, from the abuse or violation of some public trust.”

Instead, Trump’s attorney’s argue that the framers intended only a very “limited impeachment power” that expressly does not allow impeachment over abuse of power. They also belittle the idea of “foreign entanglements” as being subject to impeachment, because of that whole “superpower” thing. And, of course, the pair argue simultaneously that Donald Trump is perfectly within his authority to deny the House both testimony and documents, while also claiming that the House lacks enough direct first-hand evidence to take the case to the Senate.

The whole document is a master class in contradiction and internal inconsistencies. It’s also so boot-lickingly close to Trump’s own Tweet-logic that some readers have suggested that Trump himself authored parts of the missive. The document certainly contains enough Arbitrary Capitalization to support that argument.

The Trump-service is also clear in one of the most-repeated claims of both the letter and the longer form “brief”: the perfection of Trump’s call to Ukrainian President Volodymyr Zelensky. Again and again the argument comes back to the idea that Trump’s call was the very model of modest perfection with which no reasonable person could possibly find fault.  And even if there was a problem, it’s not a problem, because even in the arguments of Trump’s legal team, the biggest bully wins.

Cipollone might get another chance to talk about this matter and expand on these ideas in detail. Democrats in the House have informed him that he’s a material witness and that he “must disclose all facts and information as to which you have first-hand knowledge that will be at issue in connection with evidence you present or arguments you make in your role as the President’s legal advocate so that the Senate and Chief Justice can be apprised of any potential ethical issues, conflicts, or biases.” But it seems unlikely that the White House counsel will cooperate just because he supposedly works for the nation. After all, the Constitution is for “a fledgling, debt-ridden republic.” Under Donald Trump, the United States is much larger—and infinitely more in debt.

0 Kudos
28 Views
0
Share
Report
Reply
Turn on suggestions
Auto-suggest helps you quickly narrow down your search results by suggesting possible matches as you type.
Showing results for
Show  only  | Search instead for
Did you mean:
Users
Announcements