Instead of listening to those they claim to help, white leftists have picked up the Woke Man’s Burden and 'help' people — whether they want it or not.

A minor panic emerged from the Joe Biden camp after polls suggested that Hispanic voters in Florida are less supportive of their nominee than expected. Their confusion comes from believing in the idea that voters’ racial or ethnic backgrounds are the most important things about them. Combine that with incorrect ideas about what issues actually matter to people, and you have a campaign and a party that seriously misunderstands the electorate.

The alternative would be — and should be — to treat all Americans simply as Americans. Most citizens, whatever their backgrounds, want the same things: peace, prosperity, safety, and protection of their rights. Race and ethnicity are relevant, even now, but they are not everything.

Republicans often fail to see this opportunity to address all Americans as Americans, opting instead for a watered-down version of the Democrats’ plans. “Intersectionality, but conservative” is not a winning argument. Modern Republicans should consider Theodore Roosevelt’s words on the subject of “hyphenated Americans” back in 1916:

The effort to keep our citizenship divided against itself by the use of the hyphen and along the lines of national origin is certain to breed a spirit of bitterness and prejudice and dislike between great bodies of our citizens.

Instead of the bitterness TR warned of — and we see steadily manifesting today — our would-be leaders in both parties should celebrate our joint membership in the American nation.

‘Hispanic Voters’ Are Not a Monolith

Biden’s poor polling among Hispanics and the left’s reaction to it show the failure in their thinking. In his article on the subject in National Journal, Josh Kraushaar writes:

Few pundits expected Trump to improve his standing among Hispanics from the last election, and many assumed immigration was the only relevant issue for these voters. It’s a lesson that politics is often unpredictable, parties adapt to changed circumstances, and coalitions change with the times.

Kraushaar is right about Democrats making the wrong assumptions, but it’s not actually all that unpredictable. Why should an entire ethnic group agree about one issue, especially an ethnic group that is widely varied in almost every way? Speaking of the “Hispanic voter” is as ridiculous as speaking of the “white voter.” People are different, even if they have vaguely similar ancestry.

Even if the pundits insist on looking at Hispanics as a bloc, it is clear that California Hispanics vote more like Californians, and Texas Hispanics vote more like Texans. George W. Bush did very well with Hispanic voters in his own state, but it did not help him in California. To assume otherwise is kind of nuts — akin to thinking that because Bush (and Trump) did well among non-Hispanic white voters in rural areas, they would also win non-Hispanic white voters in Washington D.C.

No one says that because the pundits know white people do not all vote the same way. What they have failed to learn is that the same thing applies to other racial and ethnic groups.

The current condition of a person’s present life is far more predictive of how he votes than the nationality of his ancestors generations ago. Indeed, most Americans would nod in agreement with the following assertion from TR:

The woke elites who run the Biden campaign, whatever their race, view America and its problems differently than the median voters of the various ethnic cohorts from which they came. Surrounded only by others like them, they assume the rest of America, or at least by the rest of the voters who might consider voting Democrat, mirror their ideas.

Last year in Vox, Matt Yglesias addressed the growing divergence in thought between woke whites and the groups with whom they purport to ally. Just as socialist radicals hold many ideas about “the workers” with which the average worker does not agree, white liberals of the Great Awokening now find themselves far to the left of the average member of every other group in America, including those for whom they claim to fight.

Consider this survey question Yglesias cited about diversity. Asked whether increasing the “number of people of many different races, ethnic groups, and nationalities” here would make the United States better, worse, or the same, 87.1 percent of liberal whites said “better.” Other groups were much closer together: among non-liberal whites, 42.3 percent said it would make the country better. Among Hispanics, 45.9 percent gave the same answer, as did 54.2 percent of blacks (a full dissection of the data by Zach Goldberg is available here).

Since then, the woke elite’s strange oikophobia has been on display across the country. People of many races initially marched in support of police reform after George Floyd was killed in Minneapolis. The fringe element of rioters wanting to tear down our history and society, however, have been almost entirely white.

As Yglesias suggested in the 2019 article, the woke whites now demand more extreme solutions to the racial problems they perceive than do the people who are actually harmed by racism. Instead of listening to the people they claim to help, the white liberal extreme has decided to lift up the Woke Man’s Burden and “help” people whether they want it or not.

Do Hispanic voters want to decriminalize illegal immigration? No, most of them don’t, but liberal Democrats do, so they assume that all Hispanics do, too.

Do black people want to defund the police? No, 55 percent of black Americans surveyed in July said that police funding should remain the same or be increased, compared to 42 percent who thought it should be diminished.

It is similar to the elite Anglophone push for the made-up word “Latinx,” which only 3 percent of Hispanic people actually use. Those things are rallying cries of the far left, and those who listen as they are amplified on social media think that everyone else agrees.

It is nothing new to say that leftists think they know better than everyone else and that they want to impose that knowledge on those others. But progressivism’s weird new obsession with race means that the ideas they wish to impose are uniquely divisive and dangerous. The focus of progressivism has shifted from class to race, but the methods are the same: they know best and will lead you to the glorious future, whether you want them to or not.

Meanwhile, conservatives should avoid falling into the same trap. If the current polling data out of Florida is accurate, it shows many people are already moving away from Democrats’ racially divisive tactics.

Instead, we should follow TR’s example, speaking and working toward the shared goals of a united people. “Our ancestors came from many Old World nationalities,” he said in that same 1916 speech. “It will spell ruin to this nation if these nationalities remain separated from one another instead of being assimilated to the new and larger American life. The children and children’s children of all of us have to live here in this land together.”

Some of the national origins have changed, but the importance of a shared American nationality remains the same as it did in Roosevelt’s time. 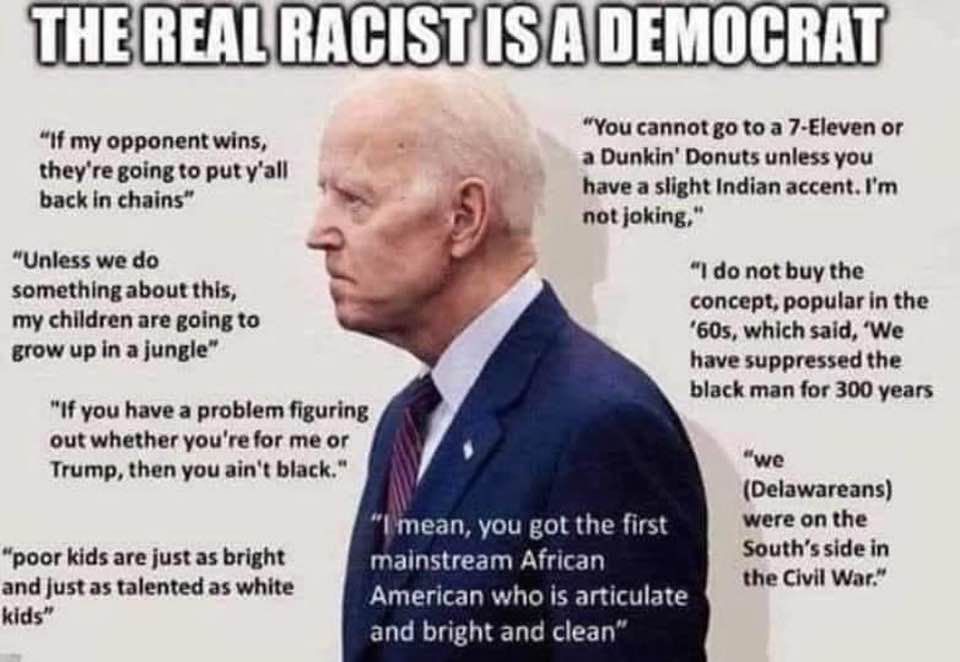 I hate this information because it makes the DIMMs look bad so I will talk bad about the publisher, not the author and will offer no information disputing what the author has stated.  Classic...

You guys are just too FUNNY!  And of course, very predictable.

As usual, Conservative's post a biased article from a very biased and extreme source.  Apparently, there continues to be no shame...

These media sources are moderately to strongly biased toward conservative causes through story selection and/or political affiliation. They may utilize strong loaded words (wording that attempts to influence an audience by using appeal to emotion or stereotypes), publish misleading reports and omit reporting of information that may damage conservative causes. Some sources in this category may be untrustworthy. See all Right Bias sources.

The Federalist is an English-language online magazine that covers politics, policy, culture, and religion. The Federalist has been described as influential in conservative and libertarian circles. The site was co-founded by Ben Domenech and Sean Davis and launched in September 2013. The current editors are David Harsanyi and Mollie Hemingway

On March 26th, 2020 Twitter locked the site’s account for violating its rules against spreading misinformation about the coronavirus.

Read our profile on United States government and media.

According to the website, The Federalist is a wholly independent division of FDRLST Media. The website is funded through online advertising as well as paid subscriptions to newsletters.

The Federalist is a news and opinion website that reports with a right wing bias that typically favors the right and denigrates the left. There is frequent use of loaded emotional language such as this: The New York Times’ Hit Piece On Mike Pence Is Anti-Christian Bigotry, Plain And Simple. In general, The Federalist sources all of their information to credible mainstream outlets, however they sometimes use sources that we have rated mixed for factual reporting such as the Daily Caller.

According to an article from the left leaning Daily Beast, The Federalist was openly critical on Donald Trump before he won the election, but has since become a strong supporter of his Presidency and agenda. Further, In November 2017, The Federalist came under criticism from both conservatives and liberals for publishing an opinion piece by Ouachita Baptist University philosopher Tully Borland defending Roy Moore’s dating of teenagers while he was in his 30s and arguing that such behavior was “not without some merit if one wants to raise a large family.”

The Federalist has also promoted pseudoscience claiming that there is a link between Abortions and Breast Cancer. According to the American College of Obstetricians and Gynecologists there is  “no causal relationship between induced abortion and a subsequent increase in breast cancer risk.”

A factual search reveals that The Federalist has made a few verified false claims.

Overall, we rate The Federalist a borderline Questionable and far Right Biased based on story selection and editorial positions that always favor the right. We also rate them Mixed for factual reporting due to the promotion pseudoscience and three failed fact checks. (8/8/2016) Updated (D. Van Zandt 03/30/2020)

Tom5678
Honored Social Butterfly
the only reason its tight in Florida is because of a massive dis info campaign by TRump and your best friends, Russia. OOOPSSS!!!!
0 Kudos
140 Views
0
Share
Report
Reply
Turn on suggestions
Auto-suggest helps you quickly narrow down your search results by suggesting possible matches as you type.
Showing results for
Show  only  | Search instead for
Did you mean:
Users
Announcements