President Trump, who constantly and falsely claims superlative achievements in every field of human endeavor, has every right to one historical claim: He is the king of lies. Trump’s presidency has offered up an endless Las Vegas buffet of completely shameless, sometimes laughable, often malicious, always self-serving falsehoods.

Among the most relentless chroniclers of this record have been The Post’s Fact Checker staff: Glenn Kessler, Salvador Rizzo, Meg Kelly and Sarah Cahlan. Their use of a Pinocchio scale to rate the truthfulness of political statements has become a Washington tradition. Its application is meticulously bipartisan. But for the past five or so years, Trump has been the predominant source of content. Now the president’s prodigious Pinocchios have been gathered into a thick volume, “Donald Trump and His Assault on Truth.”

The authors present not just a paper trail but an avalanche of confirmation for their thesis. They recount Trump’s deceptions about his academic career, his business accomplishments, his enemies, his achievements, his sex and corruption scandals. There are lies that might amuse you (like his false claim to be a Swede), or appall you (like his revision of a National Weather Service map to justify a false claim), or anger you (like his slanders against John McCain, former FBI director James B. Comey and former special counsel Robert S. Mueller III), or frighten you (like his invented claims of electoral fraud).

There is a kind of truth shading that normally attends politics. And when a public official intends to deceive, journalists sometimes debate whether to term this a “lie,” or whether to call its author a “liar.” We are far past this point with Trump. This is not a case of omitting inconvenient truths. It is deception as a lifestyle choice. It is compulsive violation of the Ninth Commandment. The president is a bold, intentional liar, by any moral definition. A habitual liar. A blatant liar. An instinctual liar. A reckless liar. An ignorant liar. A pathological liar. A hopeless liar. A gratuitous liar. A malevolent liar.

Trump fans may support him despite his lies. They may support him because he lies. But they cannot deny that he is a liar. That is the definition of a being a delusional, partisan crackpot.

The systematic presentation of the president’s deceptions serves an important public purpose. With Trump, these are not regrettable exceptions. The lies are the shape of the man. Their composite reveals a type of truth about his goals and character.

Why does lying really matter? There are, of course, compelling moral reasons. Lies exploit and abuse the trust of those around us. They sever relationships. They poison love.

But there are also practical and compelling civic reasons that truth makes a difference. As the pandemic has shown, we need reliable information to make rational, healthy choices. Deceptive optimism, distrust of experts and the circulation of myths have a human cost — measured in lost lives and delayed national recovery.

More broadly, Trump engages in a particularly ambitious form of political deception. With the help of a compliant right-wing media, he uses repeated falsehoods and conspiracy thinking to create an alternative mental universe for his strongest supporters to dwell in. Trump’s lies purposely and effectively disconnect a portion of the public from political reality. In this manufactured world, the United States is on the edge of ruin by scheming subversives. Political opponents are not fellow citizens but traitors plotting against the country. Political dialogue and shared democratic purpose become almost impossible. Such distortions are the dangerous culmination of polarization — the polarization of truth itself.

Trump’s lies are especially destructive because they are often designed to encourage dehumanization. Immigrants and outsiders are frequent targets. When he falsely charges some American Muslims with celebrating after the attacks of 9/11, or falsely accuses Mexican migrants of a disposition toward rape and violence, Trump is harnessing falsehood in the cause of bigotry.

These are slanders against whole religions and ethnicities. In politics, there is often a tie between deception and malice. Lies are particularly useful in the manipulation of fear.

Reading “Donald Trump and His Assault on Truth” is an exercise in civic awareness. This is what happens when a great many Americans ignore character and dismiss deception. We can’t expect our leaders to be perfect men and women. But we have every right and reason to demand that they are honest and decent. Fortunately, an election result, like a lie, can be corrected.

kt3081962
Newbie
I have always know donny was a con. My husband and I disliked the "best sex ever" draft dodger, bankruptcy craver our entire adult lives. Never before being president has he ever done anything good for our country like Bill and Melinda Gates.
Sex, lies and videotapes should be on his tombstone.
2 Kudos
458 Views
1
Share
Report
Reply

@kt3081962 wrote:
I have always know donny was a con. My husband and I disliked the "best sex ever" draft dodger, bankruptcy craver our entire adult lives. Never before being president has he ever done anything good for our country like Bill and Melinda Gates.
Sex, lies and videotapes should be on his tombstone.

Welcome to the forum, KT.  Like many of millions of Americans, our stomach turns every time he spews another lie.

It will be a fine day when the most corrupt man in US history is voted out of office.  Can't happen soon enough.

Again, welcome.  Look forward to seeing more of you and your husband's thoughts in the future.

I bet the Washington Post fact checkers are looking forward to taking a break next year.  They have been going non-stop for almost 4 years now.

To be honest, Obama, Clinton, Biden, et al. have been fact checked and they have also earned a few Pinocchios, but no where near the prodigious collection IMPOTUS has amassed.  It's something that only clinically-diagnosed pathological liars can only ooh and aah at and aspire to reach such lofty heights. 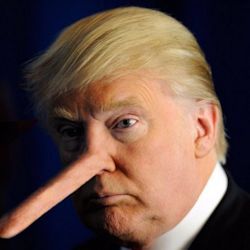 Most people can only dream of such distinction.

Perhaps, and he would also have to be termed a lowly, deviant liar.
Maybe, create a new accounting of how many times that trump tells the truth, to coincide with the number lies...will probably be easier to keep track of, and the numbers would be a lot lower!

kt3081962
Newbie
I never thought of that. county how many truths he says in a day versus lies.
so we actually get to keep a score card. I agree with Mary Trump. Why do people allow him to get away with all the lies he tells. I like Chris Wallace on Fox. boy he has an answer ready each time donny lies..
2 Kudos
458 Views
0
Share
Report
Reply
Turn on suggestions
Auto-suggest helps you quickly narrow down your search results by suggesting possible matches as you type.
Showing results for
Show  only  | Search instead for
Did you mean:
Users
Announcements